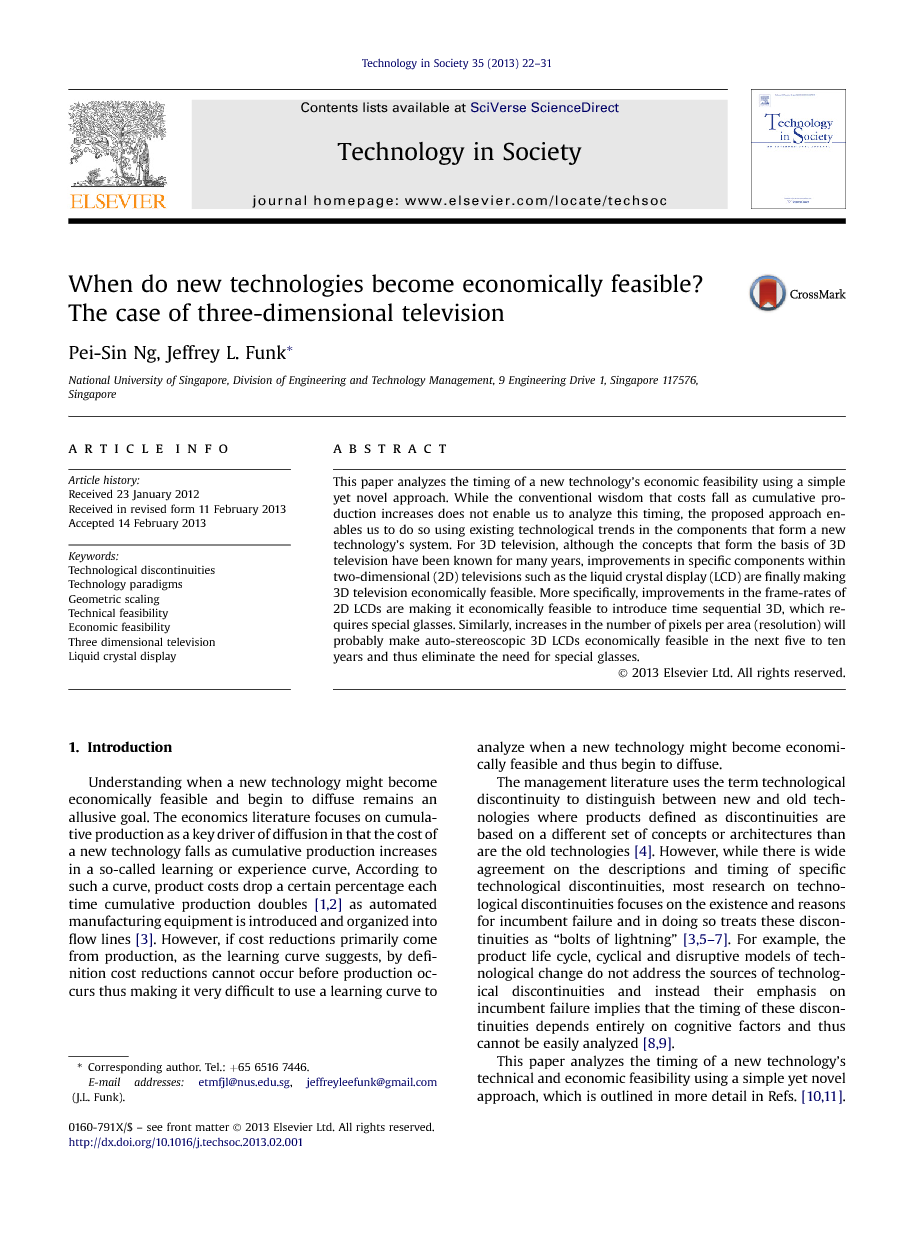 This paper analyzes the timing of a new technology's economic feasibility using a simple yet novel approach. While the conventional wisdom that costs fall as cumulative production increases does not enable us to analyze this timing, the proposed approach enables us to do so using existing technological trends in the components that form a new technology's system. For 3D television, although the concepts that form the basis of 3D television have been known for many years, improvements in specific components within two-dimensional (2D) televisions such as the liquid crystal display (LCD) are finally making 3D television economically feasible. More specifically, improvements in the frame-rates of 2D LCDs are making it economically feasible to introduce time sequential 3D, which requires special glasses. Similarly, increases in the number of pixels per area (resolution) will probably make auto-stereoscopic 3D LCDs economically feasible in the next five to ten years and thus eliminate the need for special glasses.

Understanding when a new technology might become economically feasible and begin to diffuse remains an allusive goal. The economics literature focuses on cumulative production as a key driver of diffusion in that the cost of a new technology falls as cumulative production increases in a so-called learning or experience curve, According to such a curve, product costs drop a certain percentage each time cumulative production doubles [1] and [2] as automated manufacturing equipment is introduced and organized into flow lines [3]. However, if cost reductions primarily come from production, as the learning curve suggests, by definition cost reductions cannot occur before production occurs thus making it very difficult to use a learning curve to analyze when a new technology might become economically feasible and thus begin to diffuse. The management literature uses the term technological discontinuity to distinguish between new and old technologies where products defined as discontinuities are based on a different set of concepts or architectures than are the old technologies [4]. However, while there is wide agreement on the descriptions and timing of specific technological discontinuities, most research on technological discontinuities focuses on the existence and reasons for incumbent failure and in doing so treats these discontinuities as “bolts of lightning” [3], [5], [6] and [7]. For example, the product life cycle, cyclical and disruptive models of technological change do not address the sources of technological discontinuities and instead their emphasis on incumbent failure implies that the timing of these discontinuities depends entirely on cognitive factors and thus cannot be easily analyzed [8] and [9]. This paper analyzes the timing of a new technology's technical and economic feasibility using a simple yet novel approach, which is outlined in more detail in Refs. [10] and [11]. This approach builds from the notion that technologies can be thought of as a “system” of components [12], [13], [14], [15] and [16] where new technological systems often borrow components from existing technological systems [17]. Thus, this approach focuses on the concepts that form the basis of a new technological system and the levels of performance that are needed in the relevant components before new the new concepts become technically and economically feasible. This enables us to utilize technological trends in the relevant components to analyze the timing of economically feasibility. Since data on technological trends are available for a wide variety of existing components, the ability to utilize this paper's approach primarily depends mostly on our understanding of a technology's system and components. This paper demonstrates this approach using three-dimensional (3D) television, a technology whose basic concepts have been well understood for many years. Building from one author's experience with televisions and a second author's knowledge of technological change, the key components in a 3D television are identified and analyzed. Such a system includes LCDs, ICs, and other electronic components where improvements in these components continue to be made somewhat independently of the existence or introduction of 3D televisions. For LCDs, costs have been falling quite rapidly as firms have gradually increased the size of the substrate and production equipment. In addition, improvements in their frame-rates and in the number of pixels are also being made in response to demand from other electronic products and these improvements are gradually making 3D television technologically and economically feasible. This paper first describes the ideas that form the basis of this paper's approach, the sources of these ideas, and their application to televisions. Second, it briefly describes the research methodology. Third, it summarizes the improvements in LCD displays and other electronic components that are making 3D LCD televisions technologically and economically feasible. Third, it describes how these improvements are improving the technological and economical feasibility of time-sequential and auto-stereoscopic 3D televisions, which are the two most discussed methods of achieving 3D television. Time-sequential 3D displays require special glasses that include an active or passive LCD display while auto-stereoscopic 3D LCDs do not require glasses. Fourth, this paper speculates on a pattern of diffusion for 3D television.