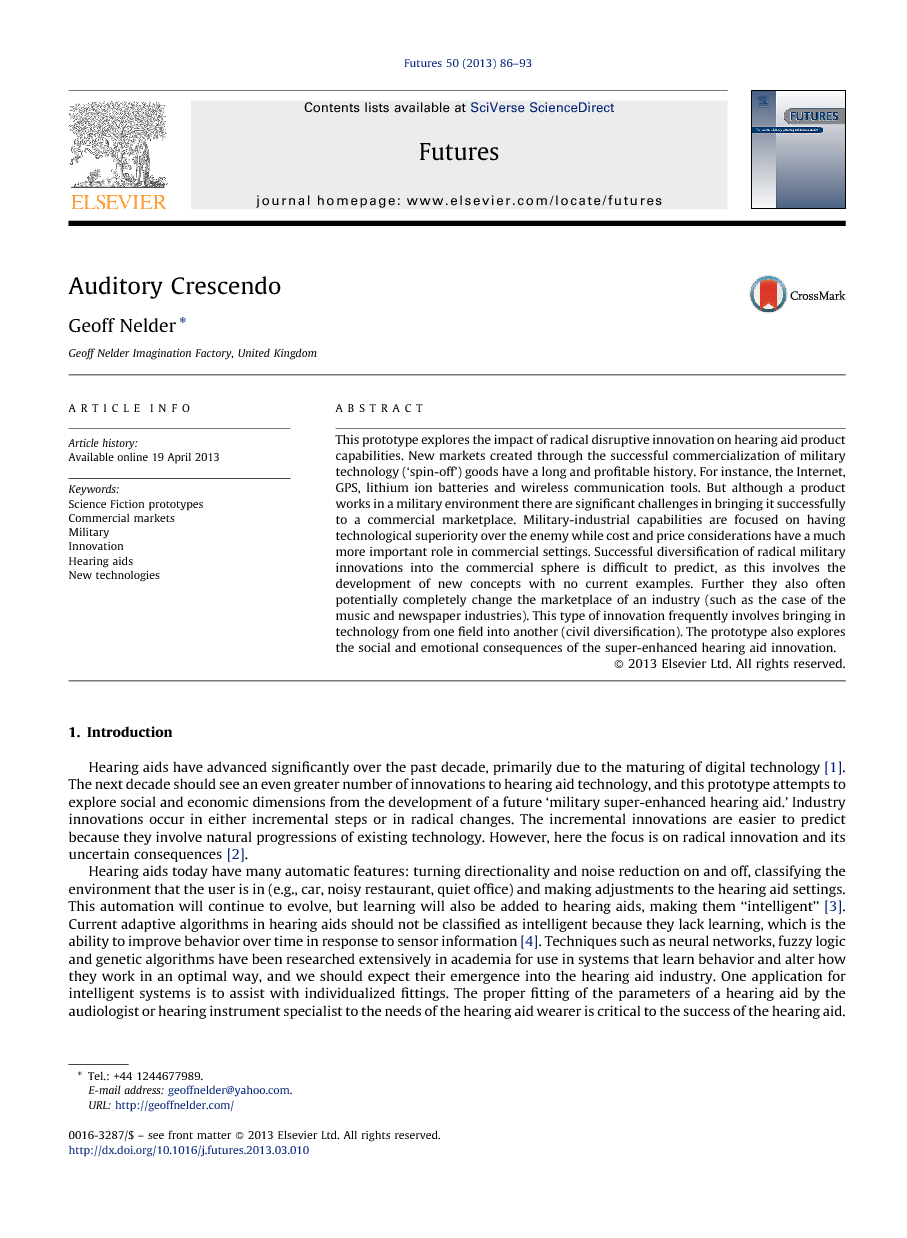 This prototype explores the impact of radical disruptive innovation on hearing aid product capabilities. New markets created through the successful commercialization of military technology (‘spin-off’) goods have a long and profitable history. For instance, the Internet, GPS, lithium ion batteries and wireless communication tools. But although a product works in a military environment there are significant challenges in bringing it successfully to a commercial marketplace. Military-industrial capabilities are focused on having technological superiority over the enemy while cost and price considerations have a much more important role in commercial settings. Successful diversification of radical military innovations into the commercial sphere is difficult to predict, as this involves the development of new concepts with no current examples. Further they also often potentially completely change the marketplace of an industry (such as the case of the music and newspaper industries). This type of innovation frequently involves bringing in technology from one field into another (civil diversification). The prototype also explores the social and emotional consequences of the super-enhanced hearing aid innovation.

This prototype explores a future technology designed for military purposes but which is being used in a civilian context. This future technology is far more advanced than current hearing aid applications which have seen major innovation over the last decade. The story implies that digital chips in hearing aids will continue to become much more advanced in capability, as improvements to current algorithms will be made and new algorithms will be created with inspiration from such sources as auditory models and other audio industries[5] and [6]. In respect to business application it highlights the not only commercial but also the social problems of trying to achieve commercial ‘spin-off’ from military technology. Not only are the technical specifications different, but the priorities and motivations of the marketplace differ considerably. Theoretically, the military could drive this cycle by itself, but Rottenberg said the problem is that the military traditionally has not been willing to compromise on “the specs that they really want,” which typically wrecks the potential economies of scale needed to drive costs downward. The role of the military in stimulating civilian technology, will be much diminished in the future, partly because its expenditures will decline, more because the civilian world is moving too fast for it. Governments (in this prototype the U.S. government) need to play more of an active role not only in diffusing technology, but also in generating it. Strategically this would involve supporting existing firms in developing particular products, deemed somehow to be of special significance. As their screening criteria and procedural proposals are too vague to be very helpful, this prototype opens a necessary debate.