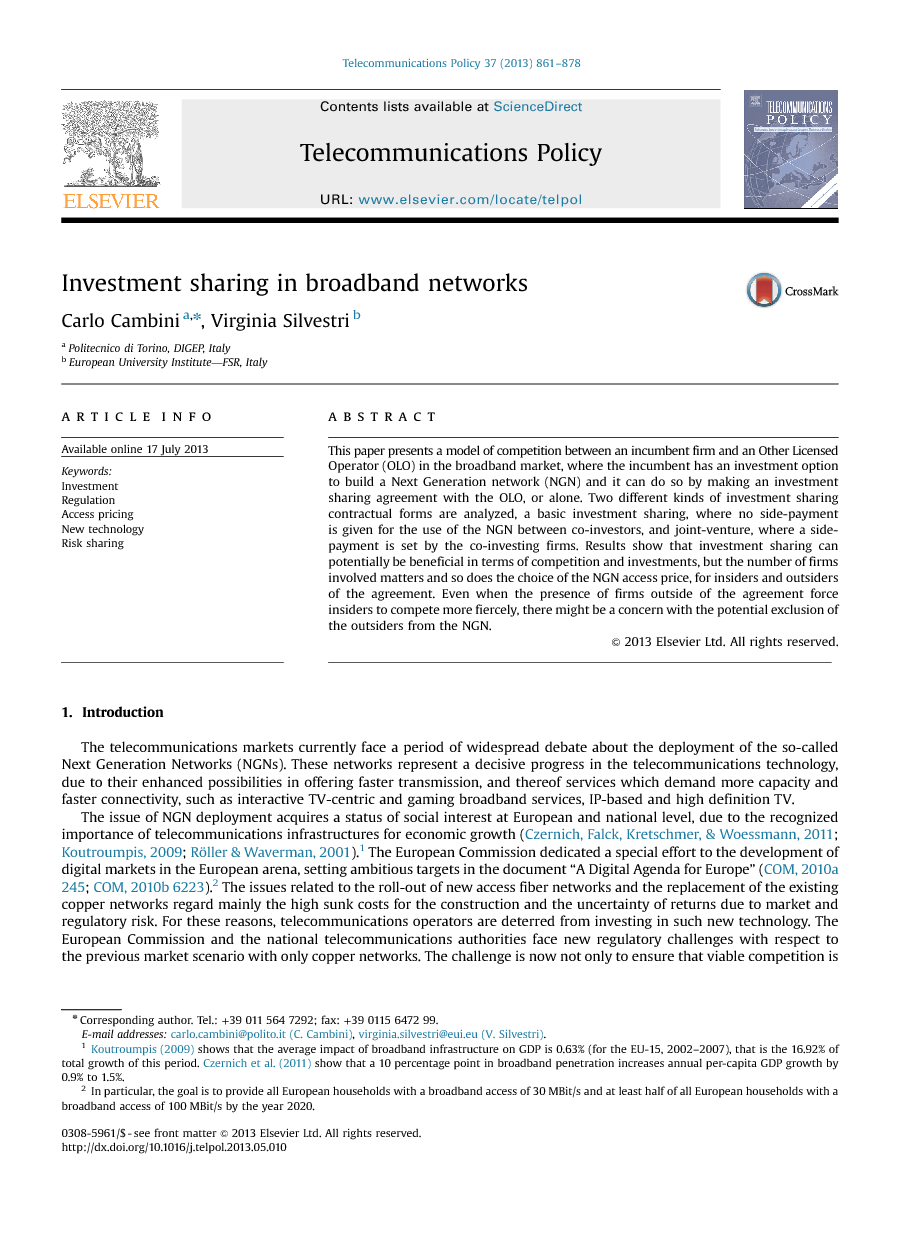 This paper presents a model of competition between an incumbent firm and an Other Licensed Operator (OLO) in the broadband market, where the incumbent has an investment option to build a Next Generation network (NGN) and it can do so by making an investment sharing agreement with the OLO, or alone. Two different kinds of investment sharing contractual forms are analyzed, a basic investment sharing, where no side-payment is given for the use of the NGN between co-investors, and joint-venture, where a side-payment is set by the co-investing firms. Results show that investment sharing can potentially be beneficial in terms of competition and investments, but the number of firms involved matters and so does the choice of the NGN access price, for insiders and outsiders of the agreement. Even when the presence of firms outside of the agreement force insiders to compete more fiercely, there might be a concern with the potential exclusion of the outsiders from the NGN.

This paper develops a model of competition between an incumbent firm and an OLO in the broadband market, where the incumbent has an investment option to build a NGN and it can do so by making a sharing agreement with the OLO, or alone. Different from previous theoretical research, this paper discusses two different kinds of sharing contractual forms—basic investment sharing, where no side-payment is given for the use of the NGN between co-investors, and joint-venture, where an insiders’ internal transfer is set by the co-investing firms—comparing them with the scenario in which the incumbent invests on a stand-alone basis. Then, the model is extended considering the entry of an outsider firm, with option to ask access to the NGN. The final purpose of the paper is to analyze how policy settings, particularly regarding network access rules, affect the firms’ investment choice. Consistent with the result in Cambini and Silvestri (2012), results show that the presence of a basic investment sharing agreement positively affects competition and it also gives fairly high investment incentives compared to the no risk sharing alternative, but also to the joint-venture case. For these reasons, the paper shows that basic investment sharing is the preferable option in most cases. As regards to the joint-venture case, when the agreement is made by all the firms present in the market, it is more likely to dampen competition downstream so much that, although the investment incentives are stronger, the results in terms of consumer surplus and social welfare tend to favor basic investment sharing. As a policy recommendation, drawn by the comparison between the case with two firms and the case with the addition of an outsider, it results that investment sharing can potentially be beneficial in terms of competition and investments, but the concerns shown by the authorities related to the inherent form of such agreements are not void. The number of firms involved matters and so does the choice of the NGN access price, for insiders and outsiders of the sharing agreement. Although eventually the regulators’ objective is having no more network duplication, it might not be an optimal strategy for a start to have all firms in the market involved in a sharing agreement, unless the insiders NGN usage transfer is constrained at zero, like in the basic investment sharing case. Even when the presence of firms outside of the agreement forces insiders to compete more fiercely, there might be a concern with the potential exclusion of outsiders from the ultra-fast broadband market. In this framework, NGN access regulation has a positive effect on competition, but it also largely reduces investment incentives. If the urgency of the regulator is to ensure that, once it is deployed, the highest possible number of firms can use the NGN, then this result says that ex-ante regulation is necessary to avoid foreclosure, even though it reduces investment incentives. On the contrary, if it is socially beneficial to have a fast and a wider deployment of an NGN infrastructure, then ex ante intervention should be at least partially relaxed. Many regulatory authorities have indeed introduced ex ante rules for NGN (such as obligations for granting access to dark fiber or local loop unbundling to fiber) but the economic conditions of wholesale services are much more debated, with several countries imposing above-cost access prices to both consider static and dynamic goals (Cullen International, 2012). The framework used in this paper abstracts from the presence of demand uncertainty in order to shed light on the contractual mechanisms of the investment sharing agreements, which has not yet been examined satisfactorily by the literature. One extension to this paper could surely integrate the context with uncertainty, making with any probability investment and welfare results lower in absolute values in all cases, as it is found in a companion paper to this one (Cambini & Silvestri, 2012). Indeed, uncertainty is probably one of the most relevant issue influencing investment incentives. Another interesting extension might be introducing an asymmetry between firms participating to the co-investment agreement with and without internal transfers. Finally, other alternative forms of sharing agreements could be analyzed, such as one in which the outsider can pay a share if the investment costs and be made part of the co-investment consortium even after the NGN deployment.