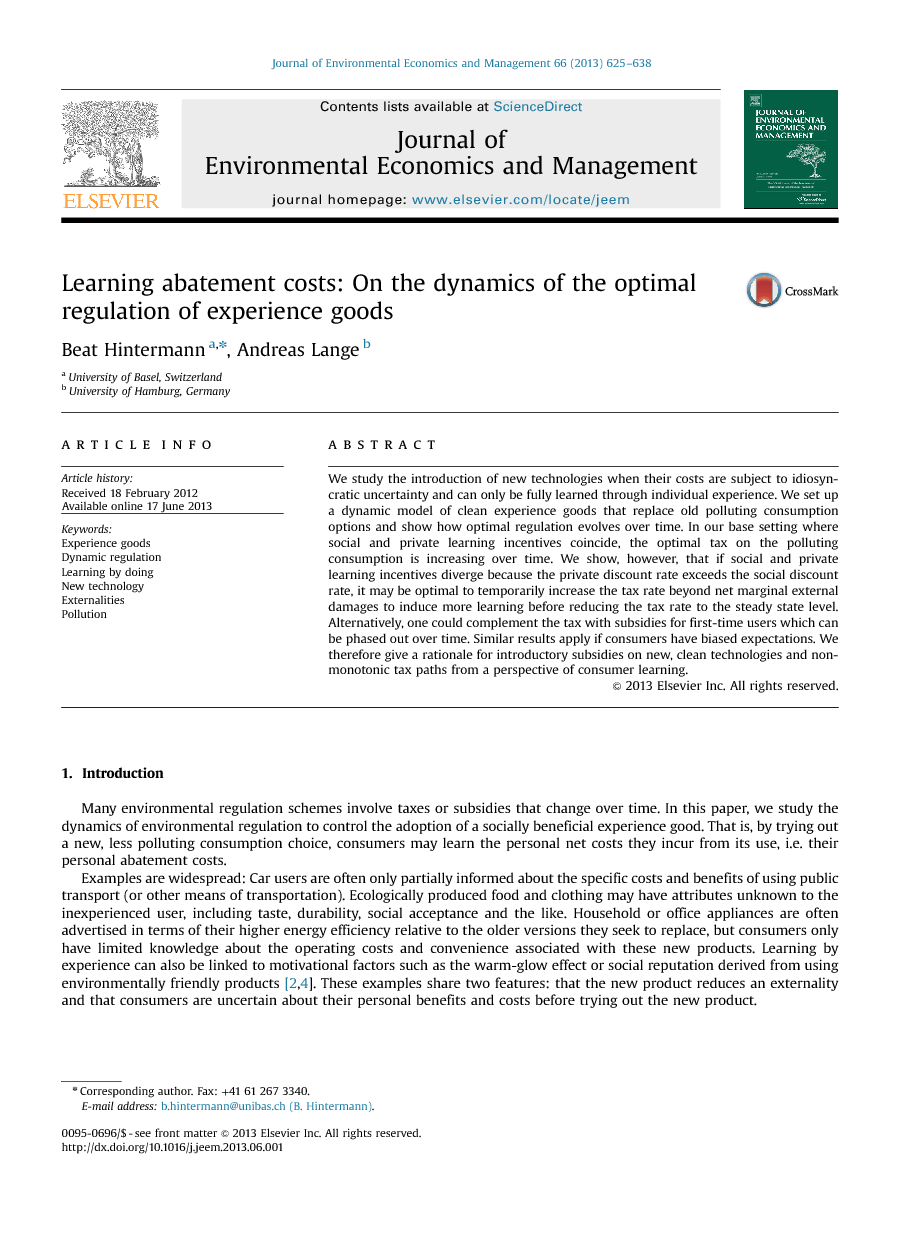 We study the introduction of new technologies when their costs are subject to idiosyncratic uncertainty and can only be fully learned through individual experience. We set up a dynamic model of clean experience goods that replace old polluting consumption options and show how optimal regulation evolves over time. In our base setting where social and private learning incentives coincide, the optimal tax on the polluting consumption is increasing over time. We show, however, that if social and private learning incentives diverge because the private discount rate exceeds the social discount rate, it may be optimal to temporarily increase the tax rate beyond net marginal external damages to induce more learning before reducing the tax rate to the steady state level. Alternatively, one could complement the tax with subsidies for first-time users which can be phased out over time. Similar results apply if consumers have biased expectations. We therefore give a rationale for introductory subsidies on new, clean technologies and non-monotonic tax paths from a perspective of consumer learning.

Regulation often involves introductory taxes or subsidies that may later be reduced. Usually this is motivated by supply-side considerations such as decreasing production costs or technology spillovers. In this article, we discuss a different rationale for introductory subsidies that is motivated by the demand-side: If consumers are uncertain about their tastes regarding a new technology, they may learn by trying. A prominent and environmentally relevant example involves the introduction of new public transport options. Whereas consumers usually know the total private costs and benefits of their status quo alternative (commuting by car), at least a part of the true opportunity costs of using public transport need to be experienced before they can be known. In this paper, we demonstrate how an optimal regulation should incorporate dynamic features that initiate from this “learning-by-trying” in an intertemporal setting. Any regulation needs to simultaneously account for two dimensions: First, experienced consumers will use the new technology if their private opportunity costs are outweighed by a tax on the old technology; second, the policy in its introductory phase needs to control the optimal number of new consumers. We demonstrate that the optimal transition path to a steady state involves increasing regulation levels as long as social and private learning incentives coincide. In this case, the first-best path can be decentralized by taxing the dirty alternative. Along the optimal path, the tax rates are increasing, which corresponds to a slow introduction of taxes. With zero or low fixed costs to expand the capacity of the new technology, the fraction of consumers using the clean alternative actually falls over time, since initially many consumers try the alternative, but then may (temporarily) go back to the polluting option. If the capacity expansion is costly, both the optimal tax and usage rates increase over time. The qualitative features of the optimal policy significantly change if the private discount rate exceeds the social discount rate. Due to the divergence between private and social learning incentives, a tax on the dirty alternative alone cannot implement the first-best solution, but complementing the tax with a subsidy for first-time users can. This subsidy is (weakly) decreasing over time. If such a special treatment of first-time users is not feasible, the regulator's second-best tax path also needs to take the different learning incentives into account. A tax path that is first increasing, but will decrease at one point in time before being constant, can improve upon a policy that relies on a monotonically increasing tax path. Although we derive our results in the context of differing private and social discount rates, they also apply to situations where consumers have biased expectations about the full costs or benefits of a new technology. Similar to the inefficiencies resulting from the difference between private and social discount rates, biased expectations result in socially inefficient learning that has to be corrected by means of subsidies or taxes for first-time users in order to obtain the first-best solution (where the subsidy is equal to the bias), or by a non-monotonic regulation path if the first-best solution is not feasible. More generally, our results suggest that if private learning incentives lead to a rate of exposure to a new experience good that lies below the social optimum, introductory subsidies can be justified not only with decreasing production costs, but also when consumers learn by experience.