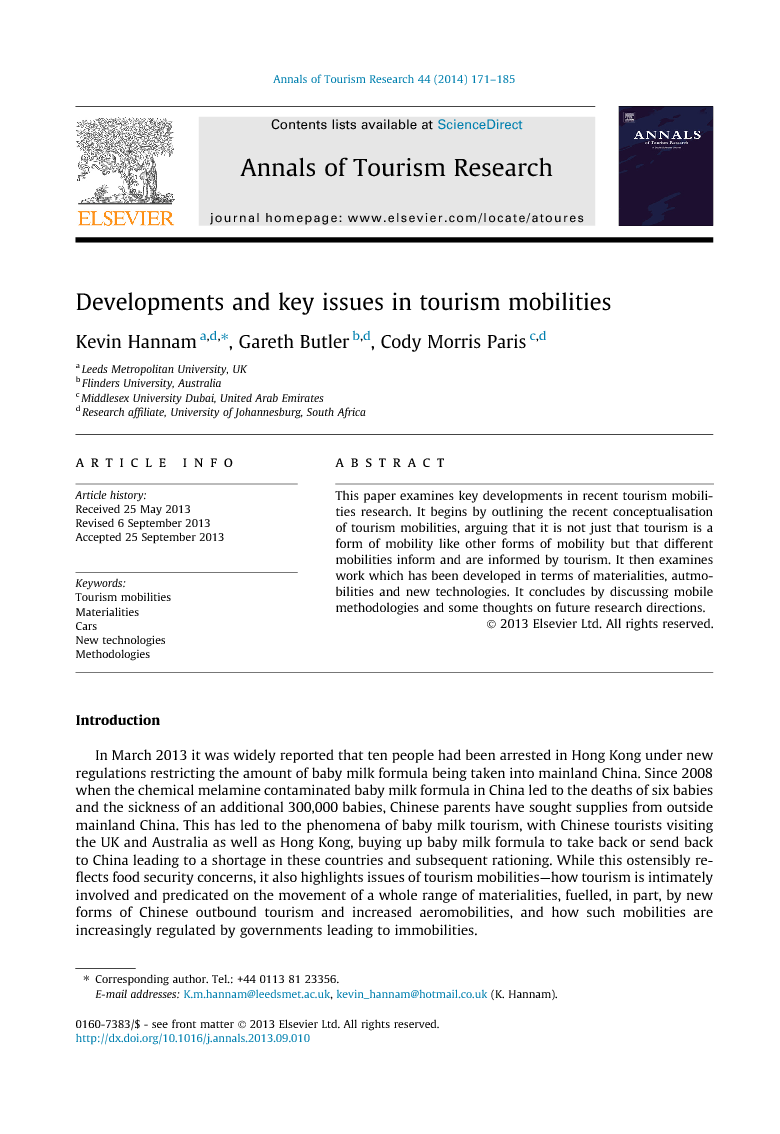 This paper examines key developments in recent tourism mobilities research. It begins by outlining the recent conceptualisation of tourism mobilities, arguing that it is not just that tourism is a form of mobility like other forms of mobility but that different mobilities inform and are informed by tourism. It then examines work which has been developed in terms of materialities, autmobilities and new technologies. It concludes by discussing mobile methodologies and some thoughts on future research directions.

Conclusions This paper has sought to give some insights into the multiple mobilities that may be involved in the study of tourism mobilities. The ‘new mobilities paradigm’ arguably allows us to place travel and tourism at the centre of social and cultural life rather than at the margins and this paper has discussed how this might be applied in the development of a research agenda for materialities and technologies that constitute tourism mobilities. Nevertheless, there are many other aspects of tourism mobilities from walking to different practices of air travel that could also be considered. Tourism mobilities have had significant impacts on the global environment and these impacts will continue to be felt as emerging economies develop and engage with mobile technologies. The transition to a post-carbon future will potentially open up many new technological configurations for tourism mobilities but at present the demand for further automobilities will continue to grow. Moreover, as the recent mobilities and immobilities of global capital continue to suggest, places and politics will remain paramount in our discussions of tourism mobilities. Researching tourism mobilities can also involve the use of mobile methodologies. Researchers often complain about the problems of doing research outside and of how their recordings with respondents have ‘background noise’ which makes it difficult to transcribe interviews. While there are computer programmes which will seek to minimize such ‘background noise’ we contend that such ‘noise’ is very much part and parcel of doing mobilities research. It is this noise which makes the recordings more intelligible, not less, providing valuable insights into the frictions and turbulence created by mobile people and things. Rather than eliminating or complaining about the noise, we would encourage researchers to actually research the noise, as this is the very stuff of tourism mobilities. Doing mobilities research thus involves paying attention to how people, things and seemingly intangible entities such as ideas are on the move, as well as how environments themselves make a difference. If we are to adequately understand the ontology of contemporary mobilities then we also need to have mobile methodologies not necessarily to ‘capture’ but to keep pace with the fluid (dis)order and (dis)embeddedness of (de)territorialized social life (D’Andrea, 2006). Firstly, “researchers will benefit if they track in various ways—including physically travelling with their research subjects—the many and interdependent forms of intermittent movement of people, images, information and objects” (Büscher & Urry, 2009, p. 103). Secondly, “as a consequence of allowing themselves to be moved by, and to move with, their subjects, researchers are tuned into the social organization of ‘moves’” (Büscher & Urry, 2009, p. 103). Such research may provide a new critical window on the mobilities, immobilities and moorings of contemporary social life by utilising innovative, experimental and increasingly sophisticated technologies (Büscher et al., 2011, Fincham et al., 2010 and Hannam et al., 2006). However, we also need to make sure that we do not over-animate social life and that we pay attention to both established and innovative methods beyond the social sciences which allow us to examine other histories, artistic and scientific practices (Merriman, 2013). It is equally important to recognise that, “[s]tillness, waiting, slowness and boredom may be just as important to many situations, practices and movements as sensations and experiences of speed, movement, excitement and exhilaration” when doing tourism mobilities research (Merriman, 2013, p. 16). Mobile methodologies add to our repertoire of techniques for gathering data rather than replacing existing ones, but help to bring alive our understanding of tourism mobilities (Adey, Bissell, Hannam, Merriman, & Sheller, 2013).