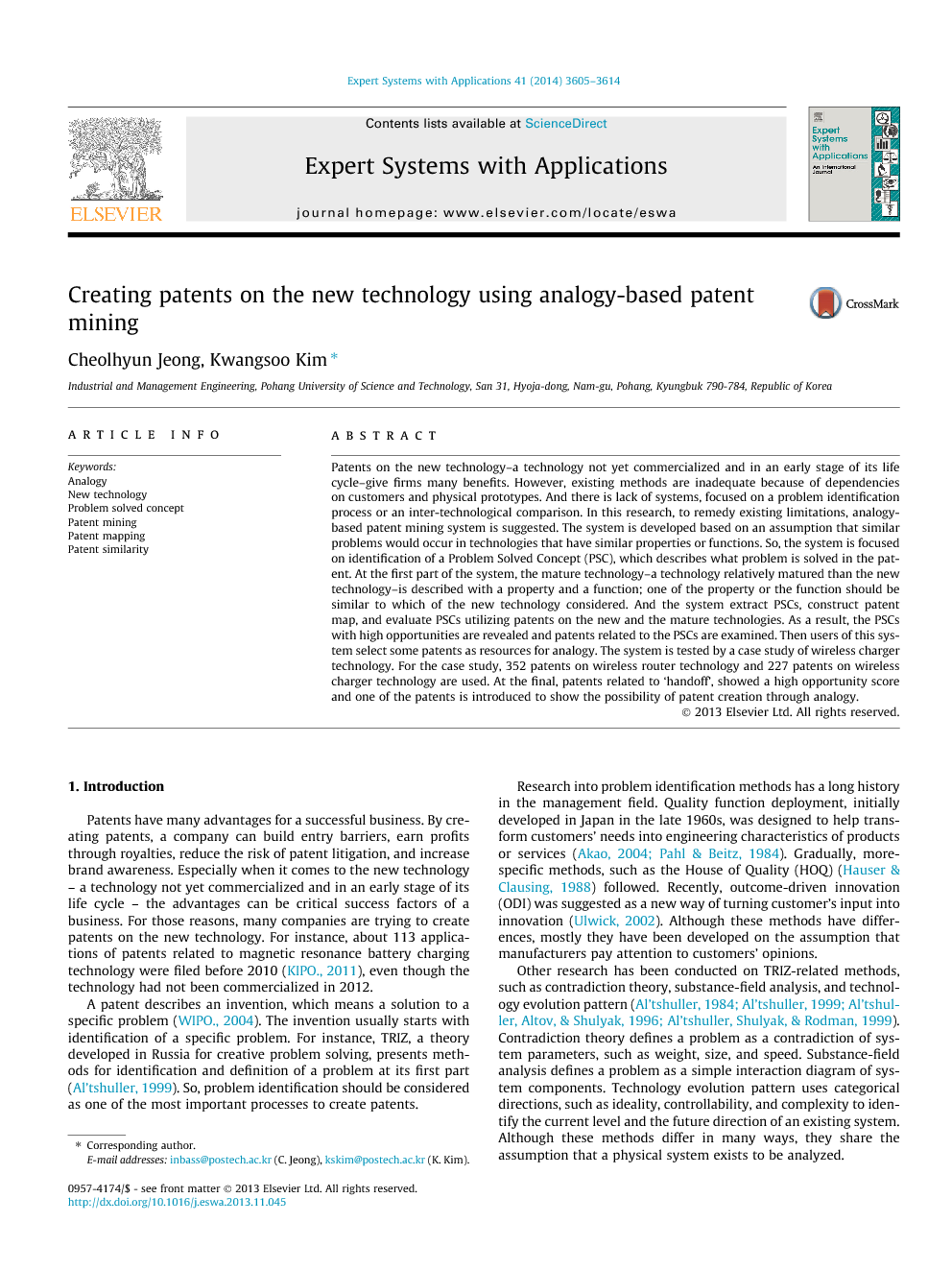 Patents on the new technology–a technology not yet commercialized and in an early stage of its life cycle–give firms many benefits. However, existing methods are inadequate because of dependencies on customers and physical prototypes. And there is lack of systems, focused on a problem identification process or an inter-technological comparison. In this research, to remedy existing limitations, analogy-based patent mining system is suggested. The system is developed based on an assumption that similar problems would occur in technologies that have similar properties or functions. So, the system is focused on identification of a Problem Solved Concept (PSC), which describes what problem is solved in the patent. At the first part of the system, the mature technology–a technology relatively matured than the new technology–is described with a property and a function; one of the property or the function should be similar to which of the new technology considered. And the system extract PSCs, construct patent map, and evaluate PSCs utilizing patents on the new and the mature technologies. As a result, the PSCs with high opportunities are revealed and patents related to the PSCs are examined. Then users of this system select some patents as resources for analogy. The system is tested by a case study of wireless charger technology. For the case study, 352 patents on wireless router technology and 227 patents on wireless charger technology are used. At the final, patents related to ‘handoff’, showed a high opportunity score and one of the patents is introduced to show the possibility of patent creation through analogy.

To create patents on new technology, analogy-based patent mining system is suggested. The system is developed based on the assumption that similar problems would occur between technologies which have similar properties or functions. The system has three sections: mining of PSC Terms, construction of the PSC-based patent mapping, and specification of the reference patents. Specifically, the process of the system is consist of seven stages: selection of the mature technology, extraction of PSC Terms, generation of artificial patents, construction of the PSC-based patent map, clustering of patents, evaluation of the patent cluster, and selection of the reference patents. This procedure identifies PSC Terms with high opportunity score and specifies the reference patents for analogy. The proposed system was tested by a case study in which the wireless charger was selected as the new technology. In the first stage, the wireless router was selected and described as the mature technology. In the second stage, PSC Terms are extracted from patents on wireless router technology and ten terms are chosen. In the third stage, ten artificial patents were generated using the chosen terms. In the fourth stage, the patent map was constructed; it used inter-patent similarities to concurrently visualize 352 wireless-router-related patents, 227 wireless-charger-related patents, and ten artificial patents. In the fifth stage, patent clusters for each of the PSC Terms were identified with distance criterion 0.5. In the sixth stage, the patent clusters were evaluated using the importance, the satisfaction, and the opportunity scores. In the final stage, patents related to ‘handoff’ were studied and one of them was introduced to show the possibility of patent creation by analogy. Existing systems and researches are not providing functions for a comparison between two technologies and problem identification. However, we provide patent mapping methods for a comparison between two technologies. The comparison was based on PSCs, and so it can be used for problem identification in the new technology. These are main contributions of this research. Meanwhile, utilizing the proposed system, real engineers or designers can systematically create patents. They can find what problems would occur in the new technology and should be focused on. Moreover, they can find patents on other technologies as resources for analogy. This leads to enhancement of their abilities. As a result, firms which are using the proposed system can be key players in the new technology. There are some limitations, such as applicability and subjectivity. First, the proposed system is not applicable to novel properties or functions. The system is based on the analogy between technologies which have similar properties or functions. If the new technology is described with novel properties or functions, specifying a similar mature technology would be difficult. To solve this limitation, semantic methods, such as WordNet developed by Princeton University, can be helpful. For example, using WordNet, users and systems can transform novel properties or functions into similar but familiar terms. So the semantic methods can be a direction of future research. Second, although most parts of the system are objective, important parts remain subjective. When examining reference patents and analogizing new patents, processes significantly depend on users’ ability. To solve this limitation, in-depth summarization system for single patent is needed. If the system summarize problems and solutions automatically, analogy process for creation of patents would be much more easy and objective.