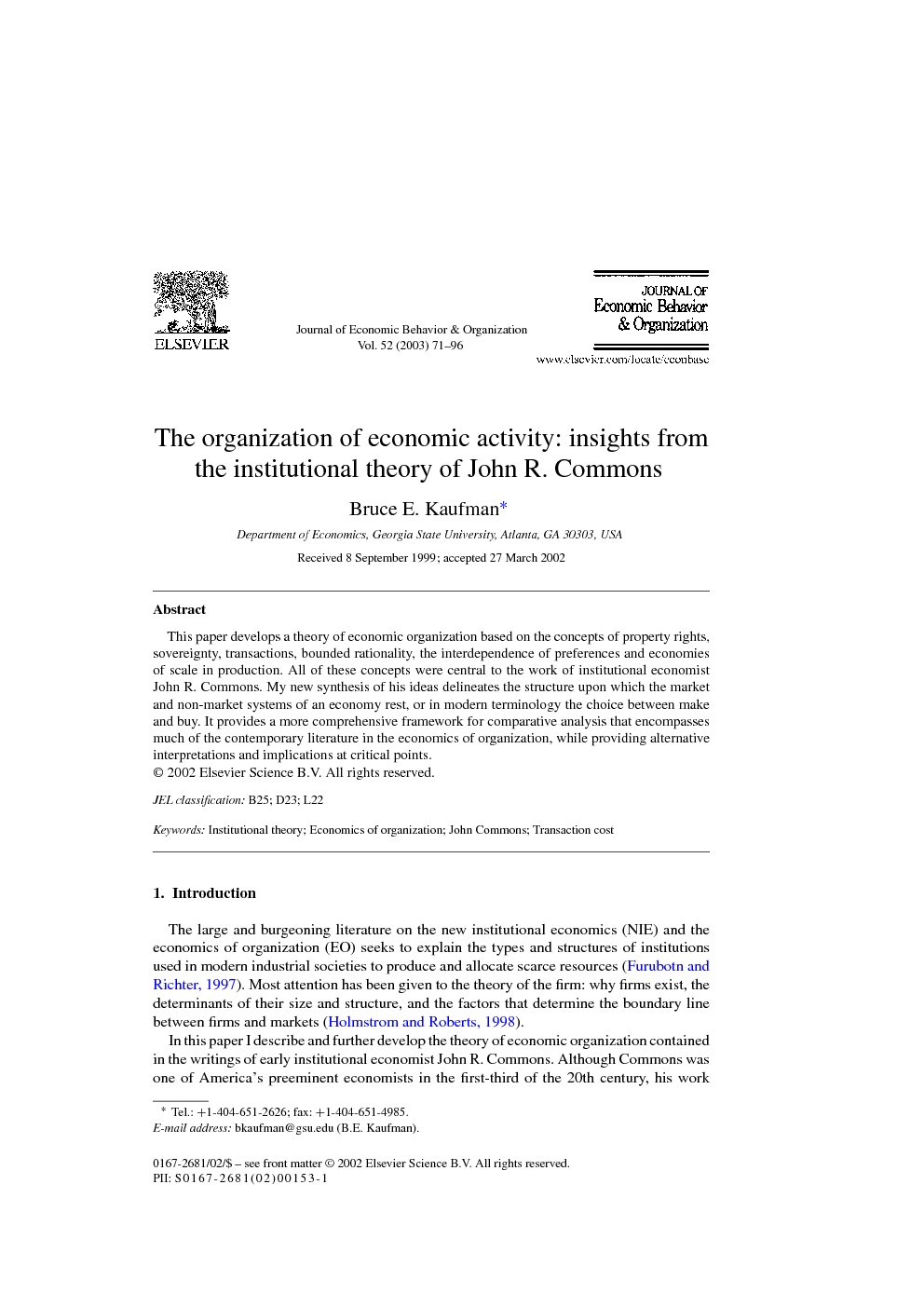 This paper develops a theory of economic organization based on the concepts of property rights, sovereignty, transactions, bounded rationality, the interdependence of preferences and economies of scale in production. All of these concepts were central to the work of institutional economist John R. Commons. My new synthesis of his ideas delineates the structure upon which the market and non-market systems of an economy rest, or in modern terminology the choice between make and buy. It provides a more comprehensive framework for comparative analysis that encompasses much of the contemporary literature in the economics of organization, while providing alternative interpretations and implications at critical points

The large and burgeoning literature on the new institutional economics (NIE) and the economics of organization (EO) seeks to explain the types and structures of institutions used in modern industrial societies to produce and allocate scarce resources (Furubotn and Richter, 1997). Most attention has been given to the theory of the firm: why firms exist, the determinants of their size and structure, and the factors that determine the boundary line between firms and markets (Holmstrom and Roberts, 1998). In this paper I describe and further develop the theory of economic organization contained in the writings of early institutional economist John R. Commons. Although Commons was one of America’s preeminent economists in the first-third of the 20th century, his work on economic organization has not had much impact on the contemporary literature, with the exception of the “transaction” concept utilized by Williamson (1985). In what follows I provide a brief overview of Common’s institutional approach to economic organization, identify and elaborate the five key constructs in his theory that influence whether production and exchange take place across markets or within firms and other organizations, and then demonstrate how permutations in these five constructs lead to different patterns of economic organization—ranging from an economic system of perfect decentralization at one end-point to a system of perfect centralization at the other. Key features of alternative theories of economic organization, such as by Coase, Williamson, and Hart and Moore, are also compared and critiqued at several places in order to further highlight the relevance and insight of Commons’s ideas.

In this paper I have developed a theory of economic organization from the work of institutional economist John R. Commons. Although Commons was a major figure in American economics in the first-third of the 20th century, his theoretical work is now largely neglected and/or dismissed by most contemporary writers on the subject of economic organization. This reflects both the lowstatus of the “old institutional” tradition in modern economics, and Commons’s exceedingly complex writing style and holistic approach to theorizing.12 Thus, two objectives of this paper are to translate and synthesize his theory into “plain English” so other economists can understand and appreciate his ideas, and to give to Commons his rightful place in the history of thought as a founding father of the economic analysis of institutions and property rights. Using the concept of a transaction, Commons distinguishes between the two major institutions modern societies use to produce and allocate good and services: markets and the price mechanism and organizations and the mechanism of command. I have then synthesized and extended his work to identify the conditions that determine when price or command are used in an economy. The five key variables are: human decision-making, utility functions, production functions, property rights and sovereignty. Of these variables, ownership, property rights, and political sovereignty are of particular importance. The system of property rights in a nation determines whether markets exist, their structure and function, and the opportunity sets, constraints, and incentives that face individual agents (Schmid, 1987; Bromley, 1989). Likewise, in theworld of economic theory the specification of property rights is fundamental to all else, since basic constructs such as utility functions, production functions, demand and supply functions, and equilibrium price are not otherwise well-defined (Samuels and Schmid, 1997). Unlike neoclassical theory, Commons does not take property rights as a “given;” rather, he shows that property rights are the product of collective action operating through the sovereignty of political and economic governments and thus reflect power relations and ethical belief systems in society. In addition to contributing to a positive theory of economic organization, Commons’s work is relevant to the work of other economists in this field, such as Coase andWilliamson. Commons’s theory calls into question assertions of Coase and Williamson that markets can coordinate production or completely substitute for firms; that firms (production units) disappear in a world of zero transaction costs; or that economic efficiency increases as economic activity shifts from firms to markets. Likewise, Commons’s point of viewsuggests that many NIE economists exaggerate the role played by transaction costs, contracting, and hold-up problems in matters of economic organization and the extent to which efficiency considerations underlie observed patterns of economic organization. Correspondingly, they slight the important role of technological factors, monopoly elements, rent-seeking, and political power. I highlight these differences in part to draw attention to the implications and power of Commons’s way of thinking, but macroscopically viewed there is far more that unites economists such as Commons, Coase, andWilliamson than divides them (Medema, 1996). Whether “old institutionalist” or “new institutionalist”, we are all engaged in a common endeavor to push the boundaries of knowledge forward on the role and structure of economic institutions.