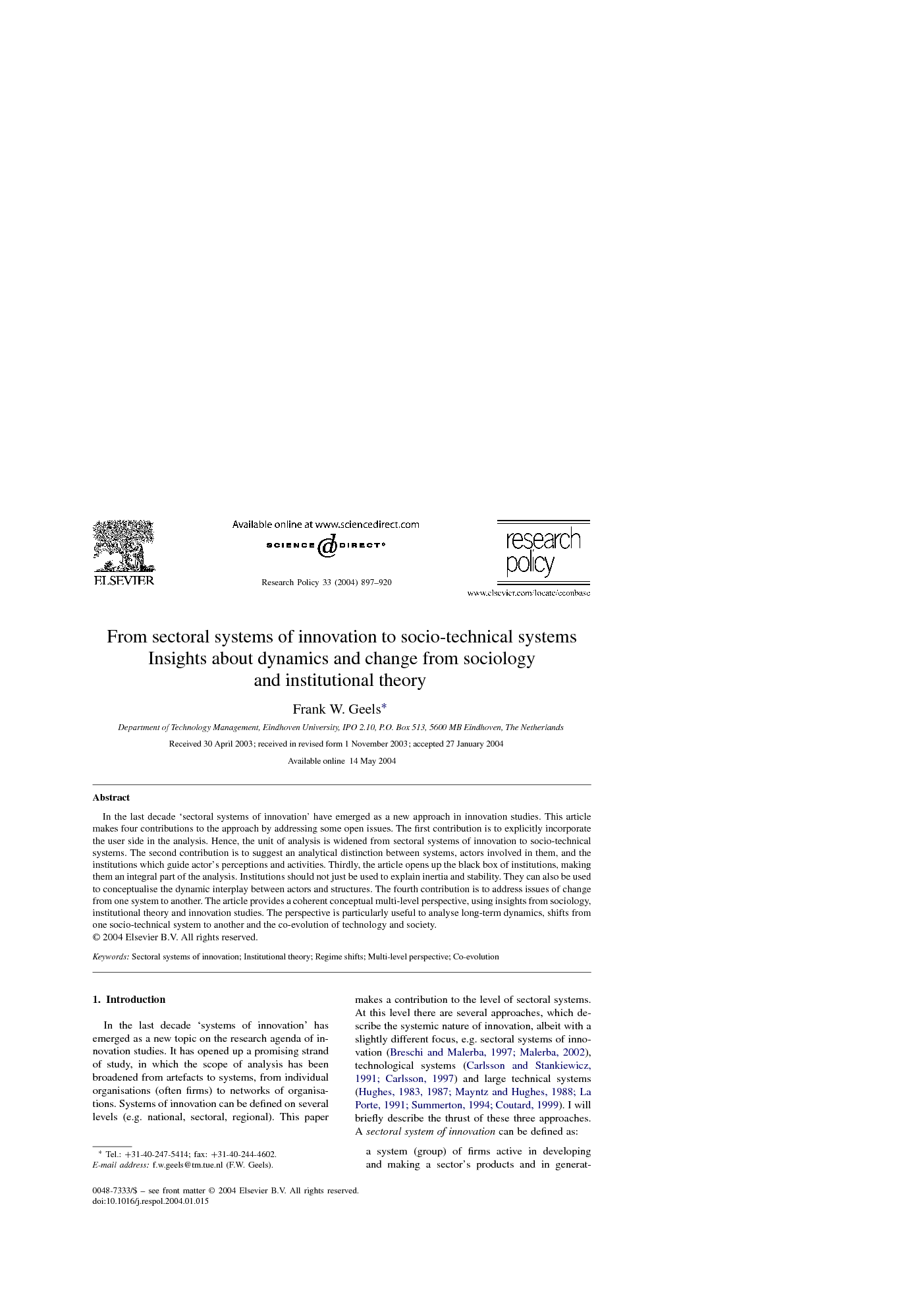 In the last decade ‘sectoral systems of innovation’ have emerged as a new approach in innovation studies. This article makes four contributions to the approach by addressing some open issues. The first contribution is to explicitly incorporate the user side in the analysis. Hence, the unit of analysis is widened from sectoral systems of innovation to socio-technical systems. The second contribution is to suggest an analytical distinction between systems, actors involved in them, and the institutions which guide actor’s perceptions and activities. Thirdly, the article opens up the black box of institutions, making them an integral part of the analysis. Institutions should not just be used to explain inertia and stability. They can also be used to conceptualise the dynamic interplay between actors and structures. The fourth contribution is to address issues of change from one system to another. The article provides a coherent conceptual multi-level perspective, using insights from sociology, institutional theory and innovation studies. The perspective is particularly useful to analyse long-term dynamics, shifts from one socio-technical system to another and the co-evolution of technology and society.

This article has made four contributions to the sectoral systems of innovation approach. The first contribution was to explicitly incorporate the user side in the analysis. Hence, it was suggested to widen the unit of analysis from sectoral systems of innovation to socio-technical systems, encompassing the production, distribution and use of technology. A second contribution was to make an analytical distinction between ST-systems, actors and institutions/rules. Making such analytical distinctions somewhat goes against usual practice in science and technology studies, which tends to emphasise ‘seamless webs’, boundary work and messy empirical reality. Although reality is complex, it is useful to make analytical distinctions, because it allows exploration of interactions between categories. This article explicitly conceptualised dynamic interactions between actors, rules and socio-technical systems in 4 and 5. This way the article went beyond notions that everything is complex and inextricably linked up. A third contribution was to open up the black box of institutions and provide a dynamic sociological conceptualisation which understands human action as structured, but leaves much room for intelligent perception and strategic action. This perspective is particularly useful to analyse long-term dynamics (years, decades), e.g. the co-evolution of technology and society (emergence of new technologies, articulation of new user practices, changes in symbolic meanings). The fourth contribution was to address the issue of change from one system to another. To that end the article described a multi-level perspective, addressing socio-technical change at three different levels. Transitions come about when dynamics at these three levels link up and reinforce each other. This understanding of transitions is not only academically interesting, but also has societal relevance. Modern societies face several structural problems. Examples of these problems can be found in many sectors. The transport sector suffers from problems such as congestion, CO2 emissions, air-pollution (small particles: NOx). The energy sector suffers from problems such as CO2 and NOx emissions and reliability issues (oil). The agricultural and food sectors suffer from problems such as infectious disease (e.g. BSE, chicken plague, foot and mouth), too much manure, too much subsidies. These problems are deeply rooted in societal structures and activities. In order to solve such deep societal problems changes from one system to another may be necessary (Berkhout, 2002). An understanding of the dynamics of transitions may assist policy makers to help bring about these changes. The conceptual perspective in this article is fairly complex. Can it be made operational for empirical research? The proof of the pudding is in the eating, i.e. use the perspective for empirical analyses of dynamics of socio-technical systems. In recent years, the multi-level perspective has been used in several empirical studies. It has been applied to the analysis of the transition from sailing ships to steamships (Geels, 2002a) and the transition from horse-and-carriage to automobiles and from propeller-aircraft to turbojets (Geels, 2002b). Belz (2004) used the perspective to study the ongoing transition in Switzerland (1970–2000) from industrialised agriculture to organic farming and integrated production. Raven and Verbong (2004) used it to analyse the failure of two niches in the Netherlands, manure digestion and heat pumps, because of mis-matches with regime-rules of electricity and agriculture. Van den Ende and Kemp (1999) applied the niche-regime-landscape concepts to analyse the shift from computing regimes (based on punched-cards machines) to computer regimes. Van Driel and Schot (2004) used the multi-level perspective to study a transition in the transshipment of grain in the port of Rotterdam (1880–1910), where elevators replaced manual (un)loading of ships. And Raven (2004) used the perspective to study the niches of manure digestion and co-combustion in the electricity regime. Although the multi-level perspective is complex, these studies show its usefulness for empirical analyses. But these studies also increasingly point to a need to differentiate the multi-level perspective, to accommodate differences between sectors and industries. One way forward is to allow for different routes in systems innovations and transitions ( Geels, 2002b and Berkhout et al., 2004). These routes may consist of different kinds of interaction between the three levels. One route could be rapid breakthrough. Sudden changes in the landscape level (e.g. war) create major changes in the selection environment of the regime. This creates windows of opportunity for an innovation to break out of its niche and surprise incumbent firms ( Christensen, 1997). An example is the breakthrough of jet engines in and after World War II. Another route could be gradual transformation, involving multiple innovations. This route starts with increasing problems in the existing regime. This leads to a search for alternative technologies. The search does not immediately yield a winner, resulting in a prolonged period of uncertainty, experimentation, and co-existence of multiple technical options. Only after some time one option becomes dominant, stabilising into a new socio-technical regime. Yet another route could be a gradual reconfiguration in large technical systems. The new innovation first links up with the old system as an add-on, and gradually becomes more dominant as external circumstance change. An example is the gradual shift in the relationship between steam turbines and gas turbines in electricity production ( Islas, 1997). At this stage these routes are merely an indication of a possible way forward. They indicate that the systems of innovation approaches have a fruitful life ahead of them.