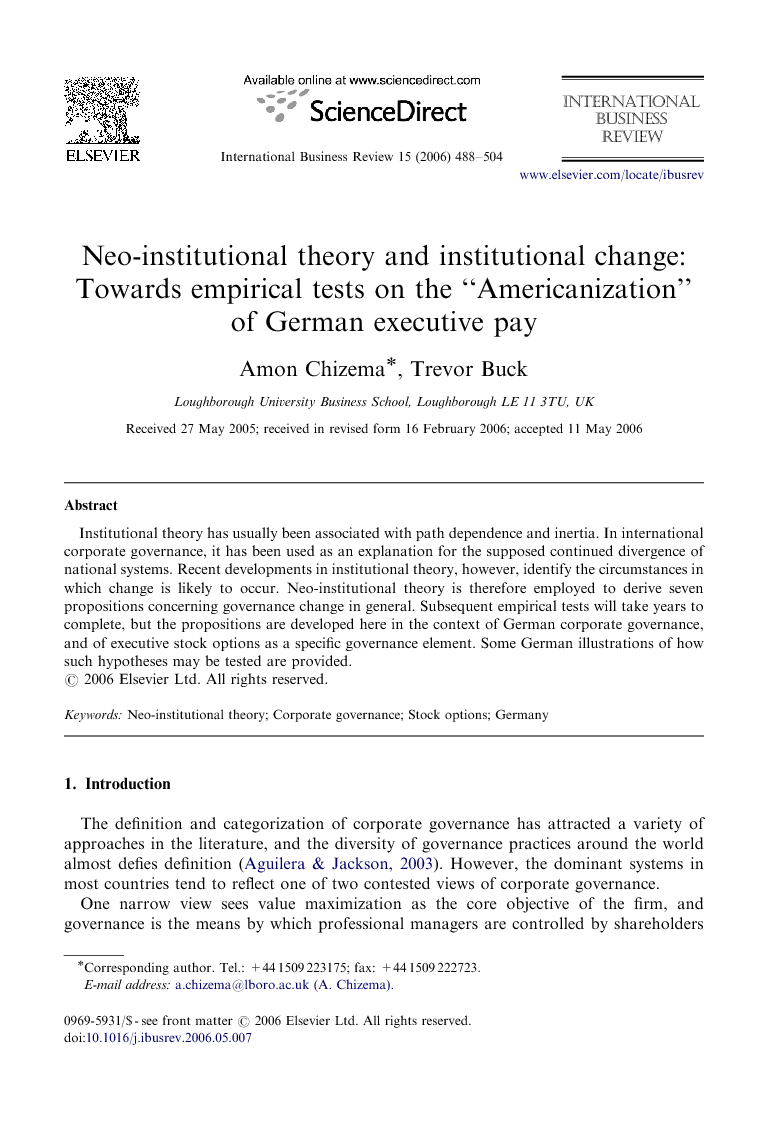 Institutional theory has usually been associated with path dependence and inertia. In international corporate governance, it has been used as an explanation for the supposed continued divergence of national systems. Recent developments in institutional theory, however, identify the circumstances in which change is likely to occur. Neo-institutional theory is therefore employed to derive seven propositions concerning governance change in general. Subsequent empirical tests will take years to complete, but the propositions are developed here in the context of German corporate governance, and of executive stock options as a specific governance element. Some German illustrations of how such hypotheses may be tested are provided.

The definition and categorization of corporate governance has attracted a variety of approaches in the literature, and the diversity of governance practices around the world almost defies definition (Aguilera & Jackson, 2003). However, the dominant systems in most countries tend to reflect one of two contested views of corporate governance. One narrow view sees value maximization as the core objective of the firm, and governance is the means by which professional managers are controlled by shareholders under “stock market capitalism” (Dore, 2000; Shleifer & Vishny, 1997). A wider definition addresses the interests of stakeholders as a whole (with shareholders only a subset), and under “welfare capitalism” stakeholders such as employees, banks and the state (as well as shareholders) contribute to the control of important decisions (Dore, 2000). This paper starts with a consideration of these two fairly distinct “worlds” of market-based and relational corporate governance, or competitive or cooperative capitalism (Sattler, Schrader, & Lüthje, 2003). Two broad areas of theory have been applied to these two worlds. First, theories of convergence, based on traditional institutional theory and the speed of internationalization (Wagner, 2004), and divergence have been developed to forecast the direction of governance change in very general terms (Perotti & Von Thadden, 2003; Wojcik, 2004; Denis and McConnell, 2003). Of course, systems can converge on some hybrid (Vitols, 2004) or on some extreme case, as in the case of so-called “Americanization” (Djelic, 1998). Indeed, some commentators have predicted that all national governance systems are converging on the American version of stock market capitalism (Hansmann & Kraakman, 2001). In stark contrast to such general theorizing, however, agency theory (Gomez-Mejia, Wiseman, & Johnson, 2005) and rent extraction theory (Bebchuk & Fried, 2004) has provided a basis for judging quantitatively at a national level whether a particular system is driven by the maximization of shareholder value or not. For example, executive pay/firm performance tests of these two theories have been applied to executive pay (Tosi, Werner, Katz, & Gomez-Mejia, 2000) In contrast, this paper is directed at a firm level rather than at national corporate governance systems and macro-level pay/performance studies. It is argued here, that the modern firm, thanks to globalization, does not have to choose one governance system or another but may pick different elements from any system that suits its needs. The paper proposes that what makes organizations different within the same national environment are not national socio-political pressures (as these are common to all organizations) but rather their internal organizational dynamics. While national institutions are path dependent according to traditional institutional theory (North, 1990), and firms tend to behave in the same way (i.e. display isomorphism), the intra-organizational dynamics of neo-institutional theory (Greenwood & Hinings, 1996) precipitate and facilitate organizational change, and the adoption of governance elements that the organization finds efficient and/or legitimate. In this sense, the pure agency or economics-derived views of shareholder-based corporate governance are seen to be “under-socialised” (Aguilera & Jackson, 2003). One particular component of German executive pay, the executive share option (ESO) is chosen here as an appropriate empirical focus for the application of neo-institutional theory. Germany lies along a clear fault-line between stock market and welfare state capitalism (Vitols, 2004), discussed below. The depth of the chasm between them in terms of executive pay can be judged by the fact that, according to Towers (2002), in 2000/2001 CEOs in large US firms on average received total pay of $1,932,000 (mainly ESOs, with salary only 27% of the total), and $669,000 in UK firms. In Germany, the Vorstandssprecher or Vorstandsvorsitzender (equivalents of the CEO) earned only $445,000 (salary 52%, most of the rest in annual bonus). Share price-based executive pay is a key component of stock market capitalism and ESOs are an American pay innovation, a crucial means by which executives are forced to pay attention to share price movements, to which their pay is automatically linked. However, critics claim that ESOs reward executives for factors beyond their control, ESO gains are only weakly related to executives’ own performance (Bertrand & Mullainathan, 2001; Froud, 2005). With these potential costs and benefits, it is argued that the ESO in Germany represent an important litmus test in relation to the Americanization of relational governance. Section 2, therefore, analyses both stock market and welfare capitalism in relation to traditional institutional theory and the associated varieties-of-capitalism view (Hall & Gingerich, 2001) that governance systems are coherent entities not subject to piecemeal change, with individual firms embedded in national institutions (Granovetter, 1985). However, the alleged “Americanization” of corporate governance around the world (Djelic, 1998) raises the general question of the circumstances in which institutional change, in this case governance reform, may occur. In Section 3, therefore, recent developments in neo-institutional theory are considered and seven general propositions are derived which address the possibility of governance changes. From all the distinguishing governance characteristics of stock market and welfare capitalism, executive pay is one of the most important distinctive, as a governance tool available to stakeholders, including shareholders. Section 4 therefore takes these seven propositions and demonstrates how they can be extended to derive testable hypotheses for Germany, a country where the Americanization of executive pay has faced resistance ( Buck & Shahrim, 2005). Illustrations and counter-illustrations are presented to explain how full empirical tests may be performed at a later date. Section 5 concludes the analysis and makes suggestions for future developments of this work.