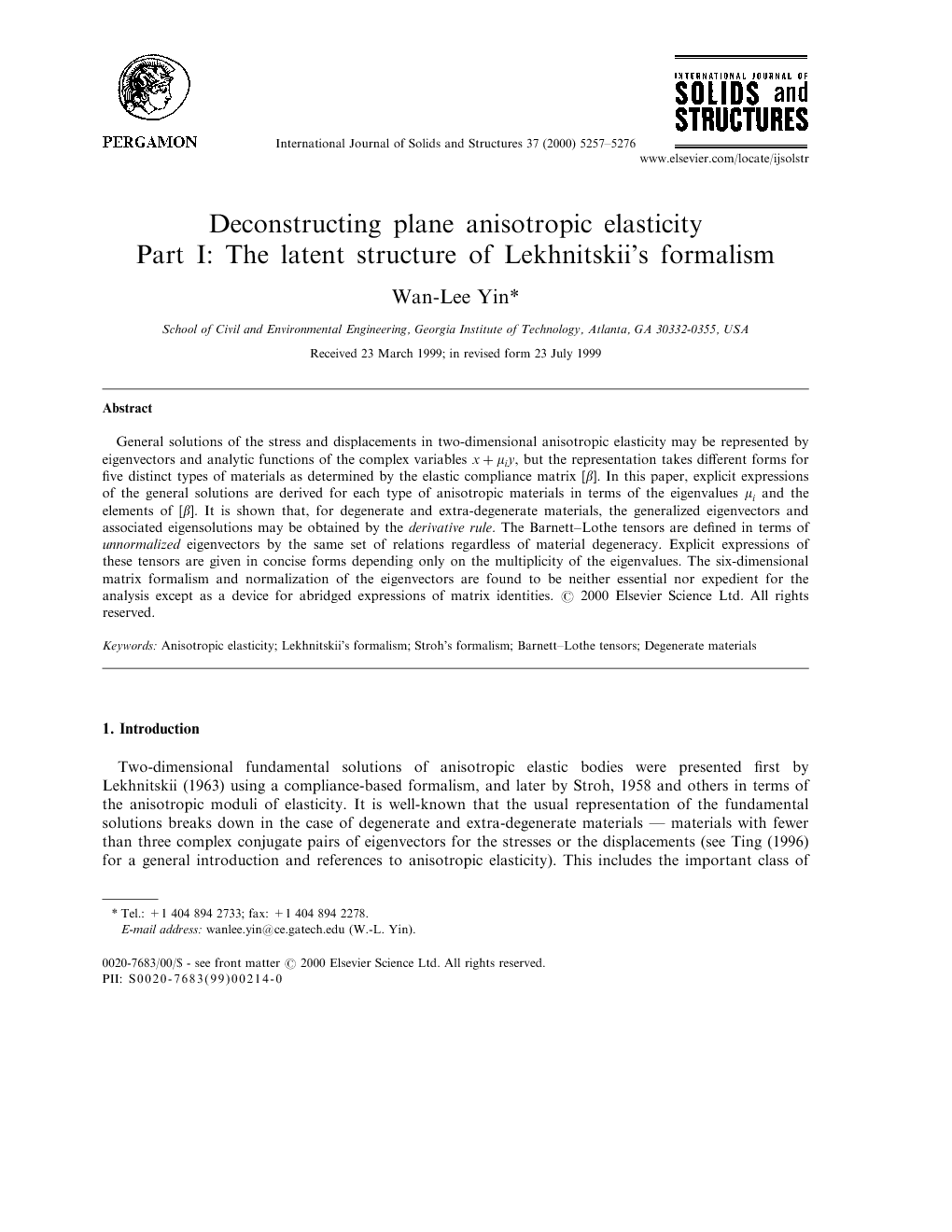 General solutions of the stress and displacements in two-dimensional anisotropic elasticity may be represented by eigenvectors and analytic functions of the complex variables x+μiy, but the representation takes different forms for five distinct types of materials as determined by the elastic compliance matrix [β]. In this paper, explicit expressions of the general solutions are derived for each type of anisotropic materials in terms of the eigenvalues μi and the elements of [β]. It is shown that, for degenerate and extra-degenerate materials, the generalized eigenvectors and associated eigensolutions may be obtained by the derivative rule. The Barnett–Lothe tensors are defined in terms of unnormalized eigenvectors by the same set of relations regardless of material degeneracy. Explicit expressions of these tensors are given in concise forms depending only on the multiplicity of the eigenvalues. The six-dimensional matrix formalism and normalization of the eigenvectors are found to be neither essential nor expedient for the analysis except as a device for abridged expressions of matrix identities.

Two-dimensional fundamental solutions of anisotropic elastic bodies were presented first by Lekhnitskii (1963) using a compliance-based formalism, and later by Stroh, 1958 and others in terms of the anisotropic moduli of elasticity. It is well-known that the usual representation of the fundamental solutions breaks down in the case of degenerate and extra-degenerate materials — materials with fewer than three complex conjugate pairs of eigenvectors for the stresses or the displacements (see Ting (1996) for a general introduction and references to anisotropic elasticity). This includes the important class of isotropic materials. More recently, Ting and Hwu (1988) showed the eigensolutions of materials that are degenerate but not extra-degenerate. The case of extra-degenerate materials (with a triple eigenvalue that has only one independent eigenvector) has been scarcely explored (Wang and Ting, 1997), and even the existence of such materials had been questioned until quite recently. In the present paper, explicit expressions of fundamental solutions are given for all types of anisotropic materials, whether nondegenerate, degenerate or extra-degenerate. For each type of material, the eigenvectors and generalized eigenvectors form a linearly independent system and satisfy modified orthogonality and closure relations. By using these relations, explicit expressions are obtained for the Barnett–Lothe tensors in terms of the eigenvalues and the anisotropic compliancies. The Barnett–Lothe tensors are here defined by the same expressions ( and of this paper) regardless of material degeneracy, in terms of unnormalized eigenvectors. A crucial relation that makes the structure of plane anisotropic elastostatic solutions so tangible is that the first two components of the b-vector (the eigenvector of the stress potentials) corresponding to an eigenvalue μ have the ratio −μ. This relation, resulting from the existence of the Airy stress function, introduces an asymmetry in the dual formalism, since the a-vector associated with the displacement field has no comparable property. Consequently, the expressions of the eigenvectors and eigensolutions of various material types are generally simpler and more explicit in a compliance-based (Lekhnitskii) formalism than in a stiffness-based (Stroh) formalism. In the degenerate and extra-degenerate cases, the generalized eigenvectors may be obtained by the derivative rule. First, analytical expressions of the eigenvectors a and b are obtained as polynomial functions of μbefore evaluatingμ at the repeated root μ0. Differentiation of the expressions with respect to μ and subsequent evaluation at μ=μ0 then yields the generalized eigenvectors. For extra-degenerate materials, repeated differentiation and subsequent evaluation at μ=μ0 gives a second set of generalized eigenvectors. Generalized eigensolutions for the displacements, stress potentials, stress and strain may also be obtained by using the same rule. Our investigation leads naturally to five distinctive types of anisotropic materials, each having different representations of the displacement and stress solutions. These material types are determined by the multiplicity of eigenvalues and, in the case of a multiple root μ0, whether or not the eigenmatrix or has a vanishing adjoint matrix (see and in the next section for the definitions of and ). If and, therefore, its adjoint matrix does not vanish for any real or complex number μ, then each eigenvalue, whether a simple or multiple root, is associated with only one independent eigenvector. Such materials will be called normal (as will be shown in Part II of this paper, their 6 × 6 eigenmatrix N are either simple or non-semisimple). If for some μ0, then there are exactly two independent eigenvectors associated with the double or triple root μ0, and the material will be called abnormal. This characterization implies, in particular, that there is no need to give a separate analysis and classification for the “M3 materials” (materials such that the matrix function M(μ) is always diagonal). Although abnormal materials are pathological in a mathematical sense, they are more familiar in the common sense because isotropic materials and materials transversely isotropic in the x–y plane are both abnormal. A parallel investigation based on the Stroh formalism leads to the same classification of materials, but the eigensolutions and the Barnett–Lothe tensors are all expressed in terms of the eigenvalues and the anisotropic elastic moduli. The latter set of expressions are derived in Part II of this paper. The dualism and asymmetry of the two formalisms are made transparent in this study.