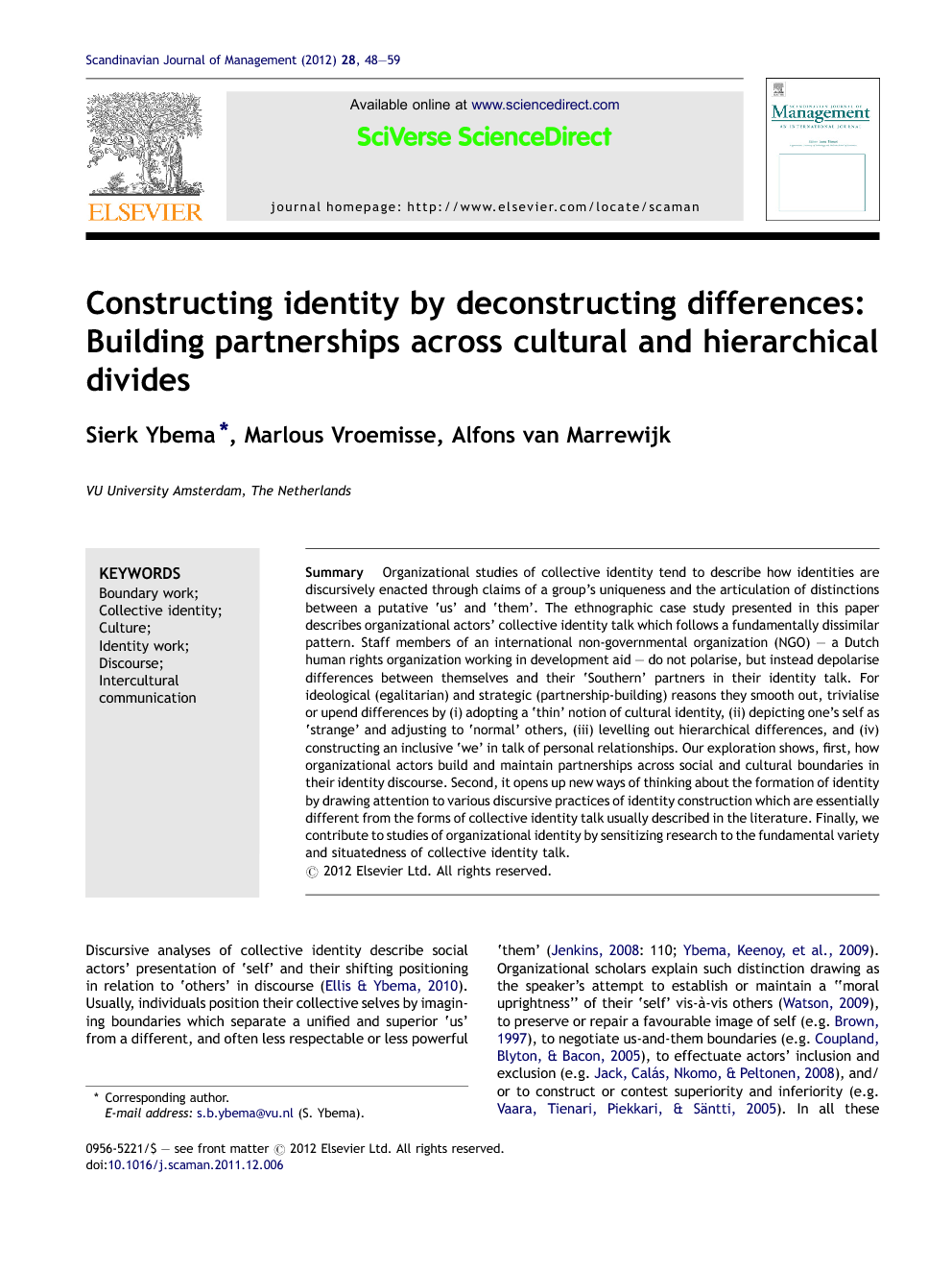 Organizational studies of collective identity tend to describe how identities are discursively enacted through claims of a group's uniqueness and the articulation of distinctions between a putative ‘us’ and ‘them’. The ethnographic case study presented in this paper describes organizational actors’ collective identity talk which follows a fundamentally dissimilar pattern. Staff members of an international non-governmental organization (NGO) – a Dutch human rights organization working in development aid – do not polarise, but instead depolarise differences between themselves and their ‘Southern’ partners in their identity talk. For ideological (egalitarian) and strategic (partnership-building) reasons they smooth out, trivialise or upend differences by (i) adopting a ‘thin’ notion of cultural identity, (ii) depicting one's self as ‘strange’ and adjusting to ‘normal’ others, (iii) levelling out hierarchical differences, and (iv) constructing an inclusive ‘we’ in talk of personal relationships. Our exploration shows, first, how organizational actors build and maintain partnerships across social and cultural boundaries in their identity discourse. Second, it opens up new ways of thinking about the formation of identity by drawing attention to various discursive practices of identity construction which are essentially different from the forms of collective identity talk usually described in the literature. Finally, we contribute to studies of organizational identity by sensitizing research to the fundamental variety and situatedness of collective identity talk.

Discursive analyses of collective identity describe social actors’ presentation of ‘self’ and their shifting positioning in relation to ‘others’ in discourse (Ellis & Ybema, 2010). Usually, individuals position their collective selves by imagining boundaries which separate a unified and superior ‘us’ from a different, and often less respectable or less powerful ‘them’ (Jenkins, 2008: 110; Ybema, Keenoy, et al., 2009). Organizational scholars explain such distinction drawing as the speaker's attempt to establish or maintain a “moral uprightness” of their ‘self’ vis-à-vis others (Watson, 2009), to preserve or repair a favourable image of self (e.g. Brown, 1997), to negotiate us-and-them boundaries (e.g. Coupland, Blyton, & Bacon, 2005), to effectuate actors’ inclusion and exclusion (e.g. Jack, Calás, Nkomo, & Peltonen, 2008), and/or to construct or contest superiority and inferiority (e.g. Vaara, Tienari, Piekkari, & Säntti, 2005). In all these accounts, collective identity is theorized as a discourse of differences and disparity between ‘self’ and ‘other’. However, if identity is essentially about distinction drawing and boundary setting, how then do organizational actors position their collective identities when they are responsible for establishing and maintaining relationships across established boundaries? When organizational actors ‘reach out’ to ‘others’, how does their identity talk break down or bridge social and cultural divides which separate ‘us’ from ‘them’? Organizational analyses of collective identity hardly address such questions. Only few studies describe identity talk which adopts and promotes a more inclusive identity and seeks to cut across us-and-them divides (e.g. Coupland et al., 2005 and Ellis and Ybema, 2010), which suggests that organizational research into collective identity might still have some relatively uncharted territories to explore. Apparently, the focus on members’ sense of ‘groupness’ and distinctiveness has deflected attention away from boundary-effacing or ‘bridge-building’ identity discourse. In a more general vein, this points to the need to sensitize research to ‘the varied ways in which identity might be shaped within organizational talk’ ( McInnes & Corlett, 2012: 22) and within various social settings. We aim to develop such a sensitivity to different, context-specific types of identity talk by analysing one somewhat unusual type of collective identity talk. In this paper, we do not describe boundary-setting us–them talk. Instead, we explore identity talk which attempts to ignore, reframe or smooth away differences and, ultimately, to upend rather than uphold relations of superiority and inferiority. Members of a Dutch human rights NGO involved in building and maintaining global partnerships called Aim for human rights deconstruct or downplay cultural and hierarchical differences. So, we ask, what discursive strategies do staff members of Aim for human rights adopt when positioning themselves vis-à-vis their international counterparts? Our case analysis shows how organizational actors build and maintain partnerships across social and cultural boundaries in their everyday discourse. Second, it opens up new ways of thinking about the formation of collective identity in organization studies by drawing attention to identity talk which disrupts established us-them distinctions and builds cross-boundary relationships. Third, we contribute to studies of organizational identity in a more general vein by developing analytical sensitivity towards the variety of ways in which organizational actors talk identities into being and the situatedness of these different types of collective identity talk. The argument proceeds as follows. First, we outline our theoretical argument in more detail, illustrating our claims by discussing interpretive studies of cross-cultural communication. Second, we explain the ethnographic research methodology used in the case and our discursive ‘take’ on analysing cultural identity. After briefly introducing the empirical setting, we then turn to the empirical findings that illustrate what discursive strategies members adopted to deconstruct or downplay cultural differences and hierarchical disparity between themselves and their international counterparts. We conclude with some thoughts on the contribution of our study to the understanding of discursively constructed identity of organizational actors involved in building boundary-transcending relationships.