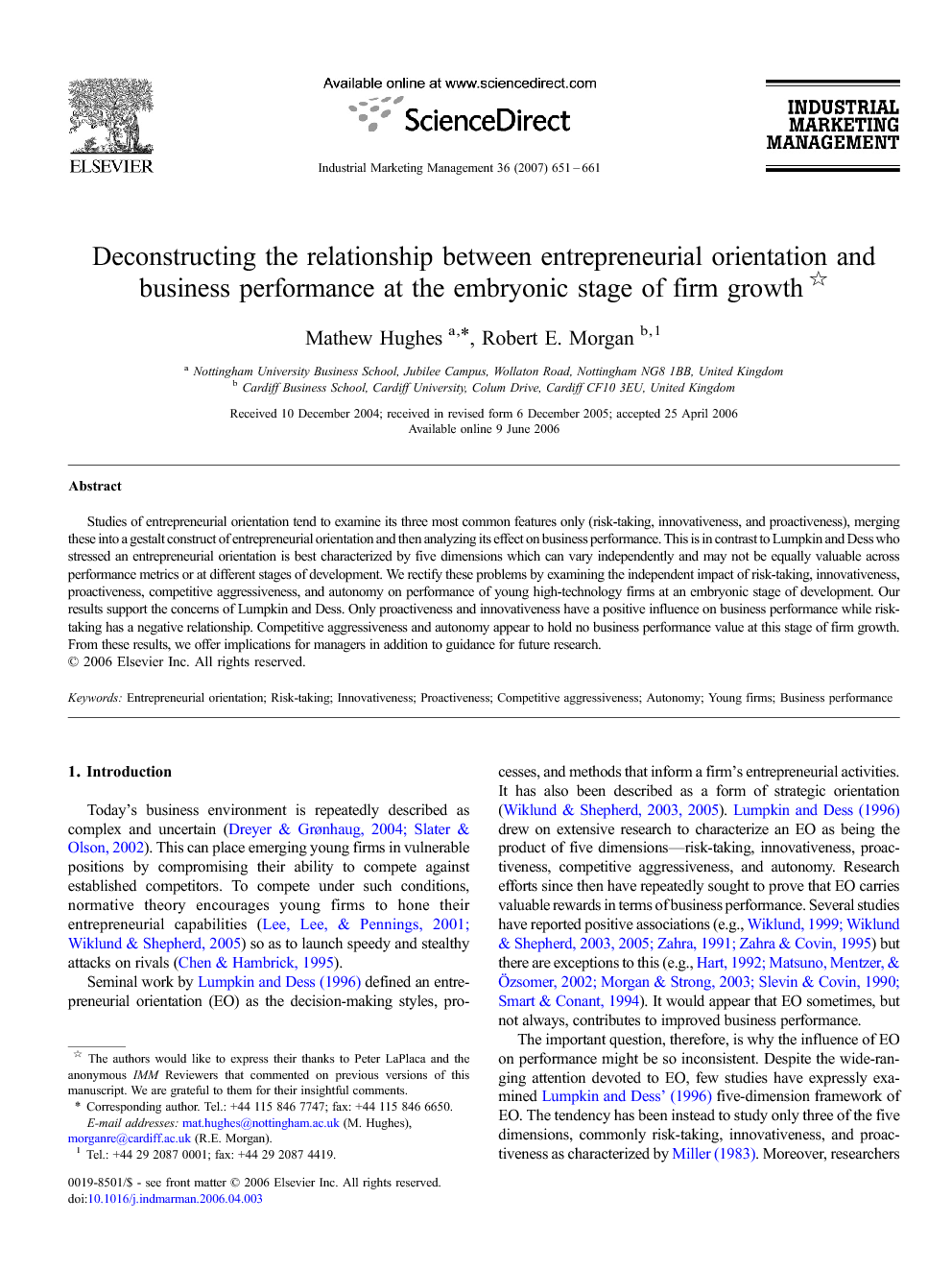 Studies of entrepreneurial orientation tend to examine its three most common features only (risk-taking, innovativeness, and proactiveness), merging these into a gestalt construct of entrepreneurial orientation and then analyzing its effect on business performance. This is in contrast to Lumpkin and Dess who stressed an entrepreneurial orientation is best characterized by five dimensions which can vary independently and may not be equally valuable across performance metrics or at different stages of development. We rectify these problems by examining the independent impact of risk-taking, innovativeness, proactiveness, competitive aggressiveness, and autonomy on performance of young high-technology firms at an embryonic stage of development. Our results support the concerns of Lumpkin and Dess. Only proactiveness and innovativeness have a positive influence on business performance while risk-taking has a negative relationship. Competitive aggressiveness and autonomy appear to hold no business performance value at this stage of firm growth. From these results, we offer implications for managers in addition to guidance for future research.

Today's business environment is repeatedly described as complex and uncertain (Dreyer & Grønhaug, 2004 and Slater & Olson, 2002). This can place emerging young firms in vulnerable positions by compromising their ability to compete against established competitors. To compete under such conditions, normative theory encourages young firms to hone their entrepreneurial capabilities (Lee et al., 2001 and Wiklund & Shepherd, 2005) so as to launch speedy and stealthy attacks on rivals (Chen & Hambrick, 1995). Seminal work by Lumpkin and Dess (1996) defined an entrepreneurial orientation (EO) as the decision-making styles, processes, and methods that inform a firm's entrepreneurial activities. It has also been described as a form of strategic orientation (Wiklund & Shepherd, 2003 and Wiklund & Shepherd, 2005). Lumpkin and Dess (1996) drew on extensive research to characterize an EO as being the product of five dimensions—risk-taking, innovativeness, proactiveness, competitive aggressiveness, and autonomy. Research efforts since then have repeatedly sought to prove that EO carries valuable rewards in terms of business performance. Several studies have reported positive associations (e.g., Wiklund, 1999, Wiklund & Shepherd, 2003, Wiklund & Shepherd, 2005, Zahra, 1991 and Zahra & Covin, 1995) but there are exceptions to this (e.g., Hart, 1992, Matsuno et al., 2002, Morgan & Strong, 2003, Slevin & Covin, 1990 and Smart & Conant, 1994). It would appear that EO sometimes, but not always, contributes to improved business performance. The important question, therefore, is why the influence of EO on performance might be so inconsistent. Despite the wide-ranging attention devoted to EO, few studies have expressly examined Lumpkin and Dess' (1996) five-dimension framework of EO. The tendency has been instead to study only three of the five dimensions, commonly risk-taking, innovativeness, and proactiveness as characterized by Miller (1983). Moreover, researchers have almost exclusively adopted an aggregate (or higher-order) approach to the assessment of EO. That is, risk-taking, innovativeness, and proactiveness are measured as independent dimensions and then a composite EO scale is created into a combined gestalt construct for further analysis. The problems with this approach are that it neglects the individual influence of each dimension and assumes a universal and uniform influence by each dimension. In contrast, Lumpkin and Dess (1996) state that each dimension can vary independently and might not necessarily be beneficial or even desirable at different points in time. As a result, the coarse-grained conclusions from much of the extant EO empirical research require that this fundamental caveat be explored further. For emerging young firms with limited resource endowments, understanding which of the five EO dimensions are most valuable to securing improved performance at their potentially vulnerable stage of development is an important priority. It is conceivable that all five dimensions may be beneficial but it is equally plausible that only a sub-set of dimensions may be valuable. At present, research into EO has ignored these issues and instead has consistently only made only a partial analysis of the Lumpkin and Dess (1996) framework and has adopted a summative approach to their examination of EO, which renders individual uniqueness obsolete. We seek to contribute to our understanding of the EO construct by rectifying these omissions and responding to the following research question: Are all five dimensions of the Lumpkin and Dess (1996) EO framework equally valuable to firms at an embryonic stage of development?