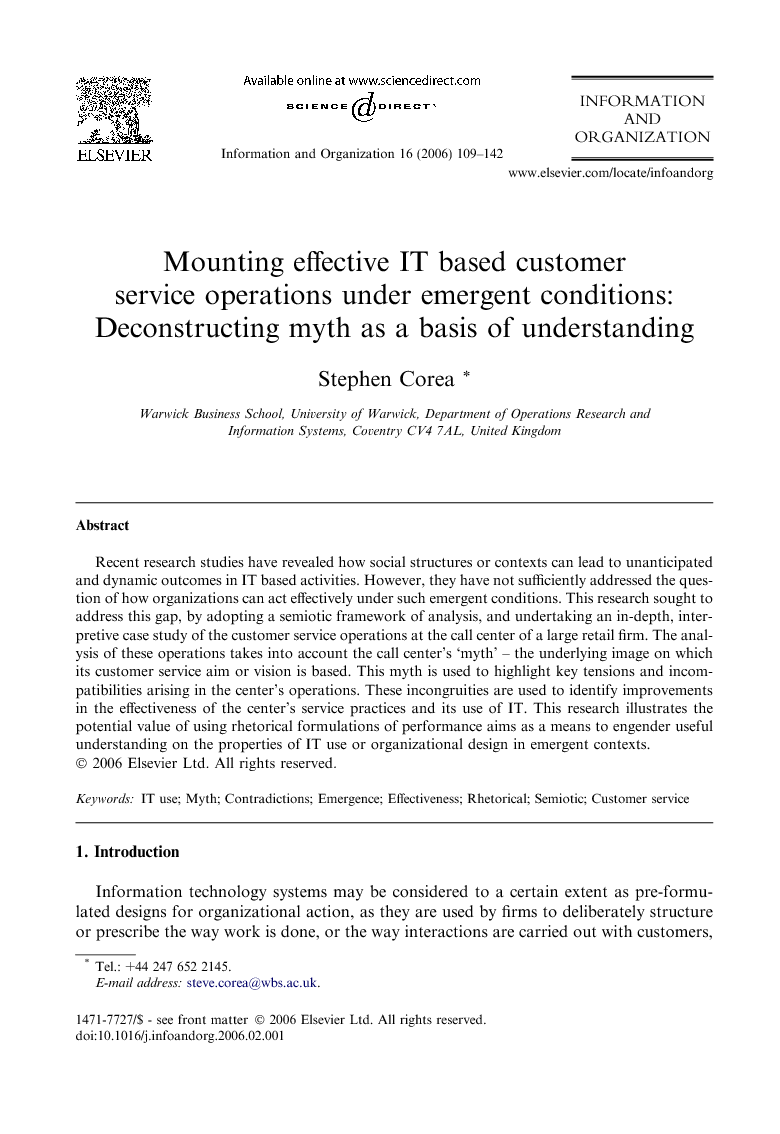 Recent research studies have revealed how social structures or contexts can lead to unanticipated and dynamic outcomes in IT based activities. However, they have not sufficiently addressed the question of how organizations can act effectively under such emergent conditions. This research sought to address this gap, by adopting a semiotic framework of analysis, and undertaking an in-depth, interpretive case study of the customer service operations at the call center of a large retail firm. The analysis of these operations takes into account the call center’s ‘myth’ – the underlying image on which its customer service aim or vision is based. This myth is used to highlight key tensions and incompatibilities arising in the center’s operations. These incongruities are used to identify improvements in the effectiveness of the center’s service practices and its use of IT. This research illustrates the potential value of using rhetorical formulations of performance aims as a means to engender useful understanding on the properties of IT use or organizational design in emergent contexts.

Information technology systems may be considered to a certain extent as pre-formulated designs for organizational action, as they are used by firms to deliberately structure or prescribe the way work is done, or the way interactions are carried out with customers, suppliers and other parties. On the other hand however, numerous studies have shown that the use of IT systems in organizations is also significantly characterized by emergent forms and consequences – dynamic patterns of organizing or unanticipated outcomes of action which cannot be explained by a priori plans or intensions ( Lee, 1999 and Orlikowski, 1996). There is thus a key requirement for theoretical approaches that can capture the complex, emergent nature of organizations (Lin and Cornford, 2000 and Truex, 1991). Understanding emergent outcomes in IT based work activity is particularly important at present, given the frenetic pace of change and turbulent environments that many organizations now operate in (Orlikowski, 1996). The use of IT has amplified the unpredictability of emergent effects in organizational practices (Galliers and Baets, 1998 and Lee, 1999). Using such perspectives as structuration theory (Orlikowski, 2000), actor-network theory (Walsham, 1997) or situated action theory (Suchman, 1987), recent IS studies have revealed the emergent nature of IT based activities in terms of being a process, shaped by social and cognitive structures of human agency and the context in which they occur. Central to this stream of work is the different meanings or implications that social actors ascribe to the properties and use of IT (Markus and Robey, 1988 and Truex et al., 1999). These differences are seen to engender the complex, unexpected outcomes characterizing emergent contexts of IT use. However, this prevailing focus within the IS ‘emergence paradigm’ (Klein, 1996) may be seen to have left one area relatively unaddressed. Shulman (1999) asserts that while such studies have produced key insights on the structuring of organizational action, they offer little guidance on understanding how effective organizational performance is enabled or inhibited by the use of IT. This suggested the need for a different approach to extend current IS understanding in this area. It appeared necessary to study emergent IT based action from a standpoint of organizational effectiveness, rather than process or social structure. This requires taking primary account of the functional role an organization is envisioned to fulfill, as expressed by its principle aim or vision. The empirical context of call center-based service operations seemed a fruitful arena in which to apply this fresh stance in the investigation of emergent IT based action. Call centers are a modern IT based organizational form, that is at the forefront of a current trend of technological intensification of service activity (Taylor & Bain, 2000). They have had limited attention in past IS research, despite wide, dramatic rates of adoption (Boddy, 2000). A handful of IS studies have made quantitative assessments of the impact of IT on their work environment. Staff are seen to experience greater performance in service tasks, higher mental stress, diminished quality of staff relationships, and lower job satisfaction (Irving et al., 1986, Kraut et al., 1989, Knights and McCabe, 1998, Subramanyam and Krishnan, 2001 and Turner, 1984). Few IS studies of call centers have been qualitative, however. Orlikowski (1996), studying the use of a Lotus Notes system at an ‘IT help-desk’ call center, found that work practices altered significantly in emergent ways, in terms of quality of knowledge, patterns of collaboration, and coordination and control features. Boddy (2000) also found that the implementation process of a new call center emerged, in unanticipated ways, from interactions between users, IT tools and structural properties. Thus, while call centers have been seen to exhibit emergent features in their operations, there has been little qualitative research on the nature of their effectiveness as service worksites. Moreover, work conditions at these ubiquitous sites are often rife with tension and contradictions (Richardson & Howcroft, 2006), which are inadequately studied aspects of IT use in IS research on emergence (Truex, 1991). The study reported here thus undertook to investigate the nature of effective IT based organizational action within the emergent conditions of call center operations. In making an exploratory effort to study emergent IT based action from the standpoint of organizational effectiveness, this research was geared towards a particular focus. A central need was seen for addressing the rhetorical way by which primary functions or performance aims are often envisioned and expressed in companies. While many researchers tend to disregard the stylized, symbolic language that is used to communicate corporate goals or visions, others have urged the importance of this dimension (Gouldner, 1976). This research thus sought to take into account the rhetorical formulation of aims/visions as a means for understanding the effectiveness of IT based action, in an emergent organizational cont

Rather than treating as trivial or insignificant the rhetorical basis by which organizational aims may be formulated, this paper had developed its value for illuminating the emergent nature of IT based activities, through the concept of myth. A heightened appreciation may be gained of the way in which organizational performance and IT use is dynamically embedded in a network of dependencies and inconsistencies, as exemplified by this study of customer service operations. Efforts to improve work activity and IT can be informed by the awareness or insights generated. This study’s contribution lies in extending current understanding of IS emergence. While previous studies had focused on the way social structures breed emergent outcomes, this research addressed the relatively uncharted area of the functional effectiveness of IT based organizational action in emergent conditions. Its case study highlights key challenges in achieving high-quality customer service operations. This study also improves the fledging qualitative research treatment of call centers in the IS field. Last but not least it precipitates new ground by applying ideas from semiotic theory to the study of IT use and organizational design. Many organizations develop distinctive forms of rhetorical ‘languaging’ that frame the significance of technology use and set up the conditions for performance (Von Krogh & Roos, 1995). This study has illustrated how the use of a semiotic framework, to analyze emergent IT based activity against a rhetorical profile, can provoke fresh understanding of organizational effectiveness. References Argyris, C., & Schon, D. (1978). Organizational learning: a theory of action perspective