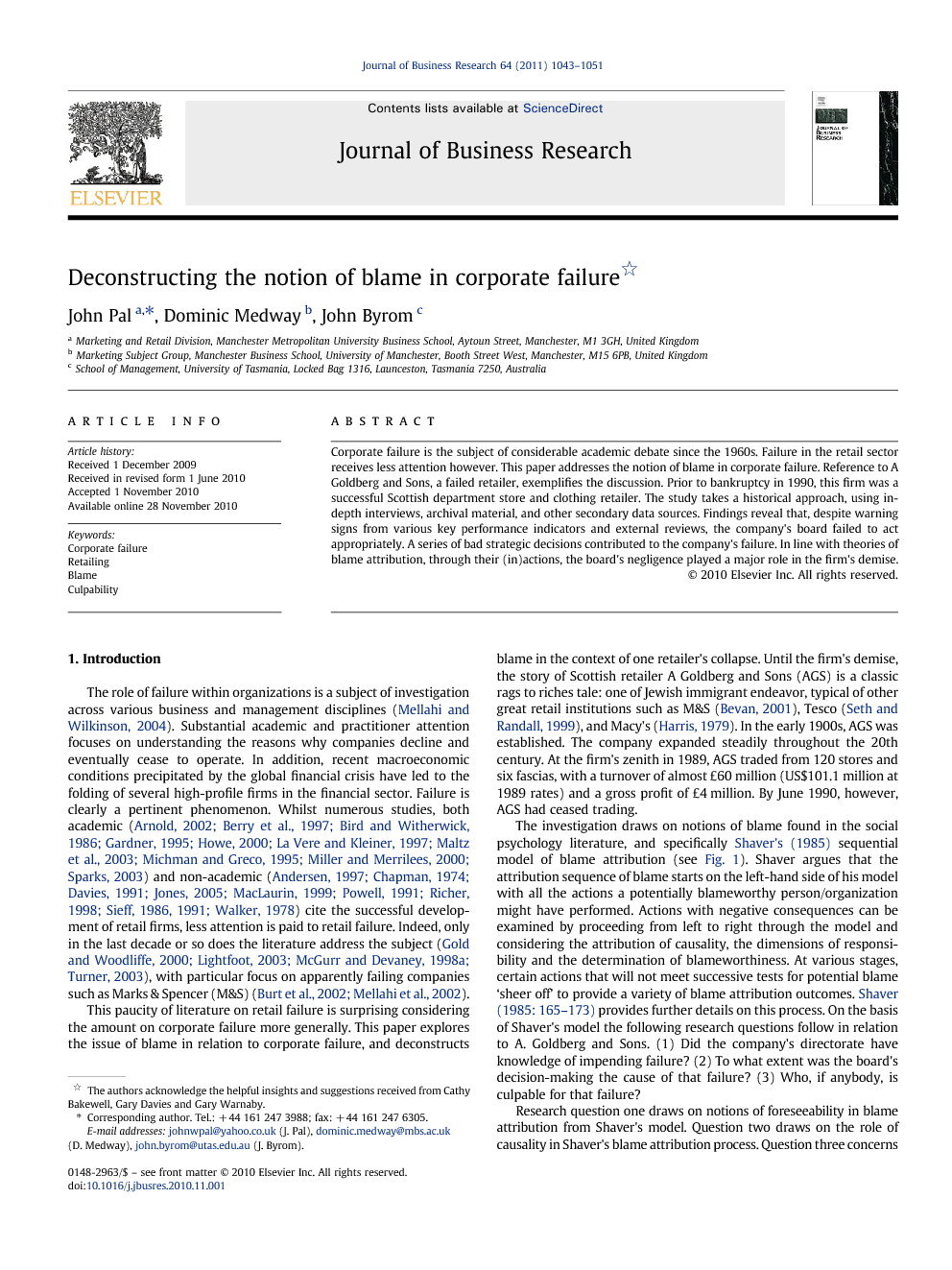 Corporate failure is the subject of considerable academic debate since the 1960s. Failure in the retail sector receives less attention however. This paper addresses the notion of blame in corporate failure. Reference to A Goldberg and Sons, a failed retailer, exemplifies the discussion. Prior to bankruptcy in 1990, this firm was a successful Scottish department store and clothing retailer. The study takes a historical approach, using in-depth interviews, archival material, and other secondary data sources. Findings reveal that, despite warning signs from various key performance indicators and external reviews, the company's board failed to act appropriately. A series of bad strategic decisions contributed to the company's failure. In line with theories of blame attribution, through their (in)actions, the board's negligence played a major role in the firm's demise.

The role of failure within organizations is a subject of investigation across various business and management disciplines (Mellahi and Wilkinson, 2004). Substantial academic and practitioner attention focuses on understanding the reasons why companies decline and eventually cease to operate. In addition, recent macroeconomic conditions precipitated by the global financial crisis have led to the folding of several high-profile firms in the financial sector. Failure is clearly a pertinent phenomenon. Whilst numerous studies, both academic (Arnold, 2002, Berry et al., 1997, Bird and Witherwick, 1986, Gardner, 1995, Howe, 2000, La Vere and Kleiner, 1997, Maltz et al., 2003, Michman and Greco, 1995, Miller and Merrilees, 2000 and Sparks, 2003) and non-academic (Andersen, 1997, Chapman, 1974, Davies, 1991, Jones, 2005, MacLaurin, 1999, Powell, 1991, Richer, 1998, Sieff, 1986, Sieff, 1991 and Walker, 1978) cite the successful development of retail firms, less attention is paid to retail failure. Indeed, only in the last decade or so does the literature address the subject (Gold and Woodliffe, 2000, Lightfoot, 2003, McGurr and DeVaney, 1998a and Turner, 2003), with particular focus on apparently failing companies such as Marks & Spencer (M&S) (Burt et al., 2002 and Mellahi et al., 2002). This paucity of literature on retail failure is surprising considering the amount on corporate failure more generally. This paper explores the issue of blame in relation to corporate failure, and deconstructs blame in the context of one retailer's collapse. Until the firm's demise, the story of Scottish retailer A Goldberg and Sons (AGS) is a classic rags to riches tale: one of Jewish immigrant endeavor, typical of other great retail institutions such as M&S (Bevan, 2001), Tesco (Seth and Randall, 1999), and Macy's (Harris, 1979). In the early 1900s, AGS was established. The company expanded steadily throughout the 20th century. At the firm's zenith in 1989, AGS traded from 120 stores and six fascias, with a turnover of almost £60 million (US$101.1 million at 1989 rates) and a gross profit of £4 million. By June 1990, however, AGS had ceased trading. The investigation draws on notions of blame found in the social psychology literature, and specifically Shaver's (1985) sequential model of blame attribution (see Fig. 1). Shaver argues that the attribution sequence of blame starts on the left-hand side of his model with all the actions a potentially blameworthy person/organization might have performed. Actions with negative consequences can be examined by proceeding from left to right through the model and considering the attribution of causality, the dimensions of responsibility and the determination of blameworthiness. At various stages, certain actions that will not meet successive tests for potential blame ‘sheer off’ to provide a variety of blame attribution outcomes. Shaver (1985: 165–173) provides further details on this process. On the basis of Shaver's model the following research questions follow in relation to A. Goldberg and Sons. (1) Did the company's directorate have knowledge of impending failure? (2) To what extent was the board's decision-making the cause of that failure? (3) Who, if anybody, is culpable for that failure? Shaver's (1985) sequential model of blame attribution. Figure options Research question one draws on notions of foreseeability in blame attribution from Shaver's model. Question two draws on the role of causality in Shaver's blame attribution process. Question three concerns the concept of the dimensions of responsibility and, in certain instances, blameworthiness. The concept of blame is under-researched in business and management, yet deserves closer attention. Specifically, focus on the above research questions, as well as providing insights into blame attribution at AGS, may also enrich understanding of other corporate failures.

This study makes two contributions. The first is a methodological point and concerns the way in which archival research combines and cross-references with present-day interviews to help in the deconstruction and subsequent understanding and attribution of blame in business failure. As well as having academic value, the ability to be able to deconstruct blame in corporate failure, most notably in terms of the dimensions of foreseeability, causality, and culpability, should further practitioner understanding of why that failure has occurred and provide lessons for the future. The other key contribution is theoretical. The above suggests that more work incorporating blame theories from social psychology with the existing body of work on corporate failure is required. This paper represents a first attempt at achieving that task. The study demonstrates how, with sufficient evidence and investigation, blame in cases of corporate failure can be conceptualized in terms of key dimensions and then mapped onto an existing model of blame attribution theory from social psychology. In academic terms, such a model provides a possible template for further comparative investigations of blame attribution outcomes in failing companies. In particular, is Shaver's (1985) notion of “lesser negligence”, attributable to AGS's directorate in relation to the company's demise, a typical or atypical blame outcome in cases of corporate failure? In summary, this paper places accountability for AGS's failure with the directorate. Their critical decisions surrounding the sale of Style in part brought this failure about; but so too did the subsequent application of these funds to rapid retail expansion at the height of the property market. The directorate also had an underlying duty for the composition of the board, and as such was liable for its apparent active inertia in decision-making. The failure of AGS was not the result of bad people. Indeed, the judge at the 1997 court case notes that the ex-directors were “men of unquestioned integrity … held in the highest esteem” with no questions arising “as to their credibility or reliability” (Scottish Civil Law Reports, 1997, p. 4). Minimal evidence of blame shifting or excuses exists amongst the directorate for the failure, as can sometimes be the case in other organizations (Bovens, 1998; Tsang, 2002). This acceptance corroborates with the admission of one former director that: … along with other colleagues, I shoulder my share of the blame. I made some poor recommendations and did not always stand my ground when I should have. It was not deliberate, just a reflection of my own relative inexperience at the time. (Director E) The antecedents of AGS's failure aremost evident in a collective lack of experience at board level. As serious problems became apparent, few of the directors seem to recognize the indicators and warning signs. Twenty years on, the continued success of Ted Baker and Schuh, both of which former AGS directors bought, indicates that in different circumstances the latent directorial skills were there to maintain a viable business. Such successes also suggest former directors may have learnt from the experience of being part of a corporate failure.