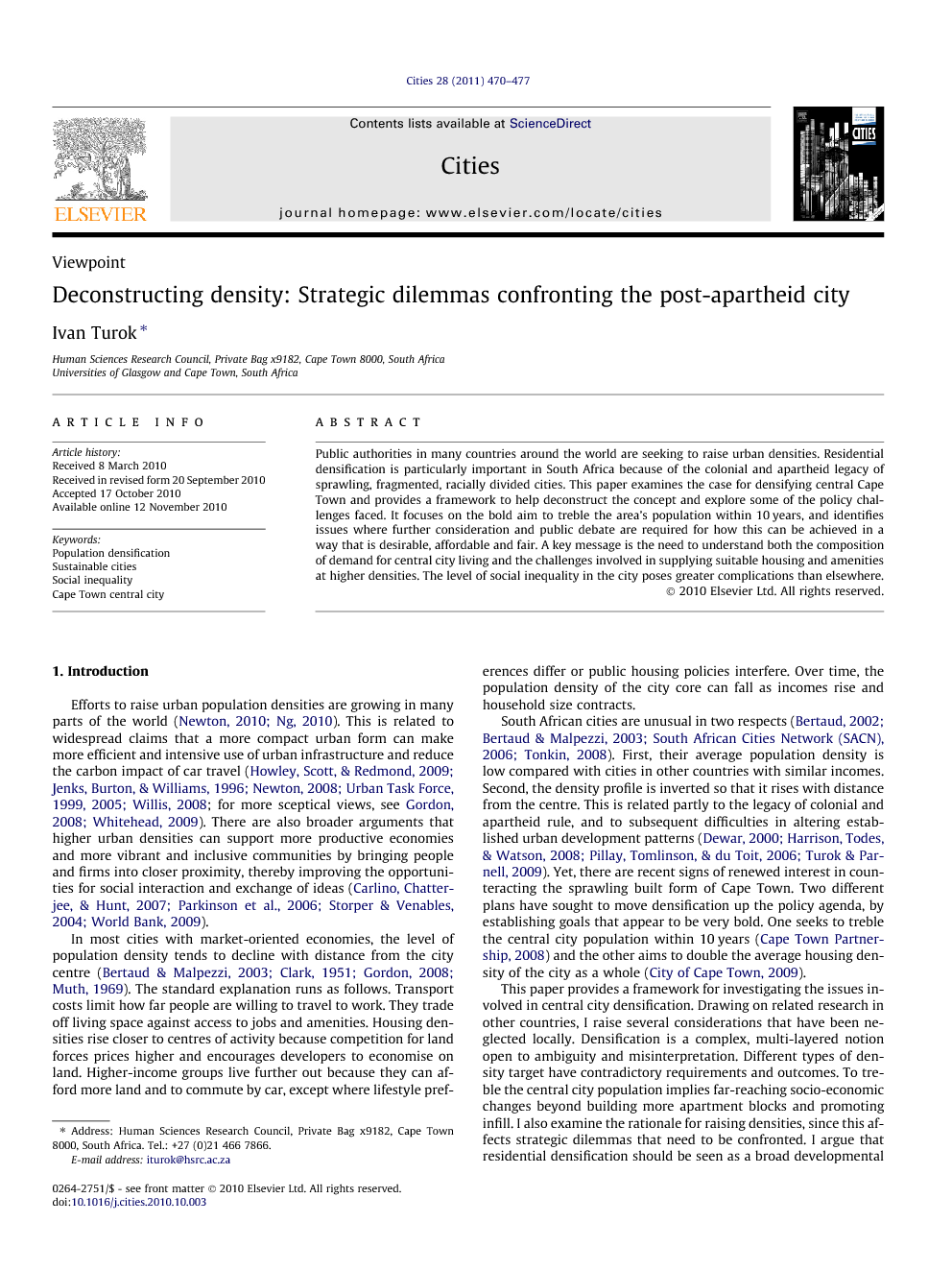 Public authorities in many countries around the world are seeking to raise urban densities. Residential densification is particularly important in South Africa because of the colonial and apartheid legacy of sprawling, fragmented, racially divided cities. This paper examines the case for densifying central Cape Town and provides a framework to help deconstruct the concept and explore some of the policy challenges faced. It focuses on the bold aim to treble the area’s population within 10 years, and identifies issues where further consideration and public debate are required for how this can be achieved in a way that is desirable, affordable and fair. A key message is the need to understand both the composition of demand for central city living and the challenges involved in supplying suitable housing and amenities at higher densities. The level of social inequality in the city poses greater complications than elsewhere

Efforts to raise urban population densities are growing in many parts of the world (Newton, 2010 and Ng, 2010). This is related to widespread claims that a more compact urban form can make more efficient and intensive use of urban infrastructure and reduce the carbon impact of car travel (Howley et al., 2009, Jenks et al., 1996, Newton, 2008, Urban Task Force, 1999, Urban Task Force, 2005 and Willis, 2008; for more sceptical views, see Gordon, 2008 and Whitehead, 2009). There are also broader arguments that higher urban densities can support more productive economies and more vibrant and inclusive communities by bringing people and firms into closer proximity, thereby improving the opportunities for social interaction and exchange of ideas (Carlino et al., 2007, Parkinson et al., 2006, Storper and Venables, 2004 and World Bank, 2009). In most cities with market-oriented economies, the level of population density tends to decline with distance from the city centre (Bertaud and Malpezzi, 2003, Clark, 1951, Gordon, 2008 and Muth, 1969). The standard explanation runs as follows. Transport costs limit how far people are willing to travel to work. They trade off living space against access to jobs and amenities. Housing densities rise closer to centres of activity because competition for land forces prices higher and encourages developers to economise on land. Higher-income groups live further out because they can afford more land and to commute by car, except where lifestyle preferences differ or public housing policies interfere. Over time, the population density of the city core can fall as incomes rise and household size contracts. South African cities are unusual in two respects (Bertaud, 2002, Bertaud and Malpezzi, 2003, SACN, 2006 and Tonkin, 2008). First, their average population density is low compared with cities in other countries with similar incomes. Second, the density profile is inverted so that it rises with distance from the centre. This is related partly to the legacy of colonial and apartheid rule, and to subsequent difficulties in altering established urban development patterns (Dewar, 2000, Harrison et al., 2008, Pillay et al., 2006 and Turok and Parnell, 2009). Yet, there are recent signs of renewed interest in counteracting the sprawling built form of Cape Town. Two different plans have sought to move densification up the policy agenda, by establishing goals that appear to be very bold. One seeks to treble the central city population within 10 years (Cape Town Partnership, 2008) and the other aims to double the average housing density of the city as a whole (City of Cape Town, 2009). This paper provides a framework for investigating the issues involved in central city densification. Drawing on related research in other countries, I raise several considerations that have been neglected locally. Densification is a complex, multi-layered notion open to ambiguity and misinterpretation. Different types of density target have contradictory requirements and outcomes. To treble the central city population implies far-reaching socio-economic changes beyond building more apartment blocks and promoting infill. I also examine the rationale for raising densities, since this affects strategic dilemmas that need to be confronted. I argue that residential densification should be seen as a broad developmental issue and located within a city-wide and national context, rather than essentially a matter of physical investment and neighbourhood alteration. A density strategy should provide the means to shift the growth trajectory of a city in a more efficient, equitable and/or sustainable direction. The concerns raised in the paper are of course relevant to contexts beyond South Africa, especially where density plans have not delivered the outcomes expected (e.g. Howley et al., 2009, Ng, 2010 and Unsworth, 2007).