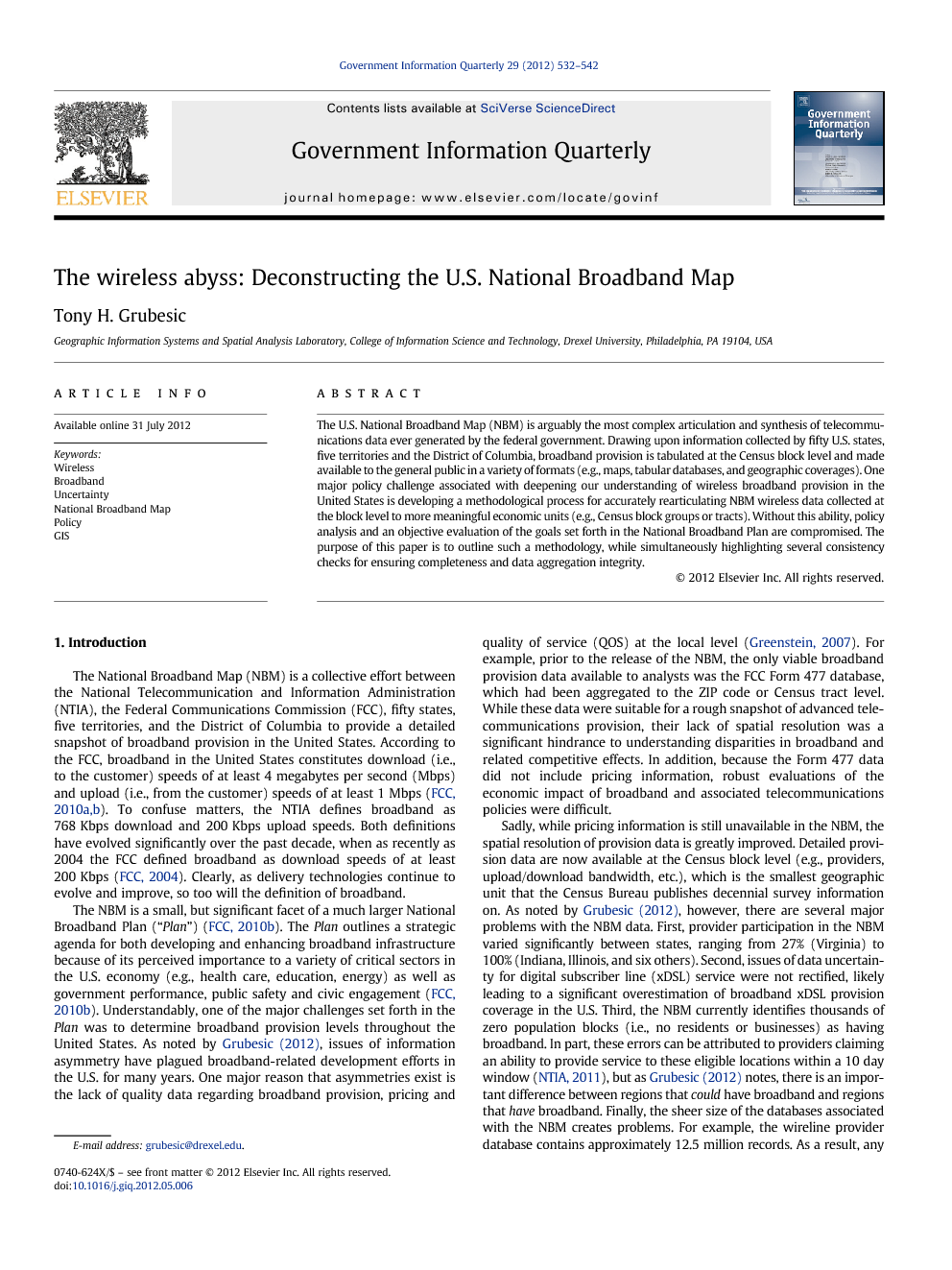 The U.S. National Broadband Map (NBM) is arguably the most complex articulation and synthesis of telecommunications data ever generated by the federal government. Drawing upon information collected by fifty U.S. states, five territories and the District of Columbia, broadband provision is tabulated at the Census block level and made available to the general public in a variety of formats (e.g., maps, tabular databases, and geographic coverages). One major policy challenge associated with deepening our understanding of wireless broadband provision in the United States is developing a methodological process for accurately rearticulating NBM wireless data collected at the block level to more meaningful economic units (e.g., Census block groups or tracts). Without this ability, policy analysis and an objective evaluation of the goals set forth in the National Broadband Plan are compromised. The purpose of this paper is to outline such a methodology, while simultaneously highlighting several consistency checks for ensuring completeness and data aggregation integrity

The National Broadband Map (NBM) is a collective effort between the National Telecommunication and Information Administration (NTIA), the Federal Communications Commission (FCC), fifty states, five territories, and the District of Columbia to provide a detailed snapshot of broadband provision in the United States. According to the FCC, broadband in the United States constitutes download (i.e., to the customer) speeds of at least 4 megabytes per second (Mbps) and upload (i.e., from the customer) speeds of at least 1 Mbps (FCC, 2010a and FCC, 2010b). To confuse matters, the NTIA defines broadband as 768 Kbps download and 200 Kbps upload speeds. Both definitions have evolved significantly over the past decade, when as recently as 2004 the FCC defined broadband as download speeds of at least 200 Kbps (FCC, 2004). Clearly, as delivery technologies continue to evolve and improve, so too will the definition of broadband. The NBM is a small, but significant facet of a much larger National Broadband Plan (“Plan”) ( FCC, 2010b). The Plan outlines a strategic agenda for both developing and enhancing broadband infrastructure because of its perceived importance to a variety of critical sectors in the U.S. economy (e.g., health care, education, energy) as well as government performance, public safety and civic engagement ( FCC, 2010b). Understandably, one of the major challenges set forth in the Plan was to determine broadband provision levels throughout the United States. As noted by Grubesic (2012), issues of information asymmetry have plagued broadband-related development efforts in the U.S. for many years. One major reason that asymmetries exist is the lack of quality data regarding broadband provision, pricing and quality of service (QOS) at the local level ( Greenstein, 2007). For example, prior to the release of the NBM, the only viable broadband provision data available to analysts was the FCC Form 477 database, which had been aggregated to the ZIP code or Census tract level. While these data were suitable for a rough snapshot of advanced telecommunications provision, their lack of spatial resolution was a significant hindrance to understanding disparities in broadband and related competitive effects. In addition, because the Form 477 data did not include pricing information, robust evaluations of the economic impact of broadband and associated telecommunications policies were difficult. Sadly, while pricing information is still unavailable in the NBM, the spatial resolution of provision data is greatly improved. Detailed provision data are now available at the Census block level (e.g., providers, upload/download bandwidth, etc.), which is the smallest geographic unit that the Census Bureau publishes decennial survey information on. As noted by Grubesic (2012), however, there are several major problems with the NBM data. First, provider participation in the NBM varied significantly between states, ranging from 27% (Virginia) to 100% (Indiana, Illinois, and six others). Second, issues of data uncertainty for digital subscriber line (xDSL) service were not rectified, likely leading to a significant overestimation of broadband xDSL provision coverage in the U.S. Third, the NBM currently identifies thousands of zero population blocks (i.e., no residents or businesses) as having broadband. In part, these errors can be attributed to providers claiming an ability to provide service to these eligible locations within a 10 day window (NTIA, 2011), but as Grubesic (2012) notes, there is an important difference between regions that could have broadband and regions that have broadband. Finally, the sheer size of the databases associated with the NBM creates problems. For example, the wireline provider database contains approximately 12.5 million records. As a result, any effort to aggregate these data to alternative units for analysis is computationally burdensome, time consuming and prone to error. Although the problems associated with wireline NBM data are fairly well understood, much less attention has been paid to the wireless NBM data. This is a notable gap because there is growing sentiment that wireless options may have a disruptive effect on the overall broadband market, making wireline options (e.g., fiber to the home) less attractive (Middleton & Given, 2011). This suggests, that now more than ever, developing an understanding of where wireless broadband options are available is critical to evaluating disparities in broadband and evaluating the relative success or failure of the National Broadband Plan over time. Unfortunately, in their current form, the NBM wireless provision data are both unwieldy and the antithesis of user-friendly. With over 50 million individual records for wireless provision, efforts to manipulate, analyze and visualize these data at a national scale are both time consuming and computationally intensive. Thus, the purpose of this paper is to provide a methodological framework for rearticulating the raw, wireless broadband provision data from the NBM to more meaningful economic units for policy evaluation, spatial econometric analysis and geographic visualization. Specifically, provision data are aggregated from Census blocks to block groups using a multistep process that leverages the data manipulation abilities of a geographic information system (GIS). A variety of data consistency checks for ensuring completeness and data aggregation integrity are also detailed

The purpose of this paper was to outline a methodological framework for rearticulating the raw, wireless broadband provision data from the NBM to more meaningful administrative units for policy evaluation, spatial econometric analysis and geographic visualization. Specifically, provision data were aggregated from Census blocks to block groups using a multistep process that leverages the data manipulation abilities of a geographic information system. However, the true utility of the outlined approach is the flexibility to rearticulate the wireless data to any administrative unit. A variety of data consistency checks for ensuring completeness and data aggregation integrity were also detailed. Results suggest that the National Broadband Map is fraught with data inconsistencies, but if tracked carefully, can be managed and mitigated to develop a more accurate representation of wireless broadband provision in the United States. It is hoped that the outlined strategy will make the NBM data more accessible to those interested in telecommunications policy evaluation, disparities in communications availability and the growing information economy. Further, although this paper is somewhat critical of the NBM, it is also important to note that these data, while imperfect, represent a major improvement when compared to previous efforts.