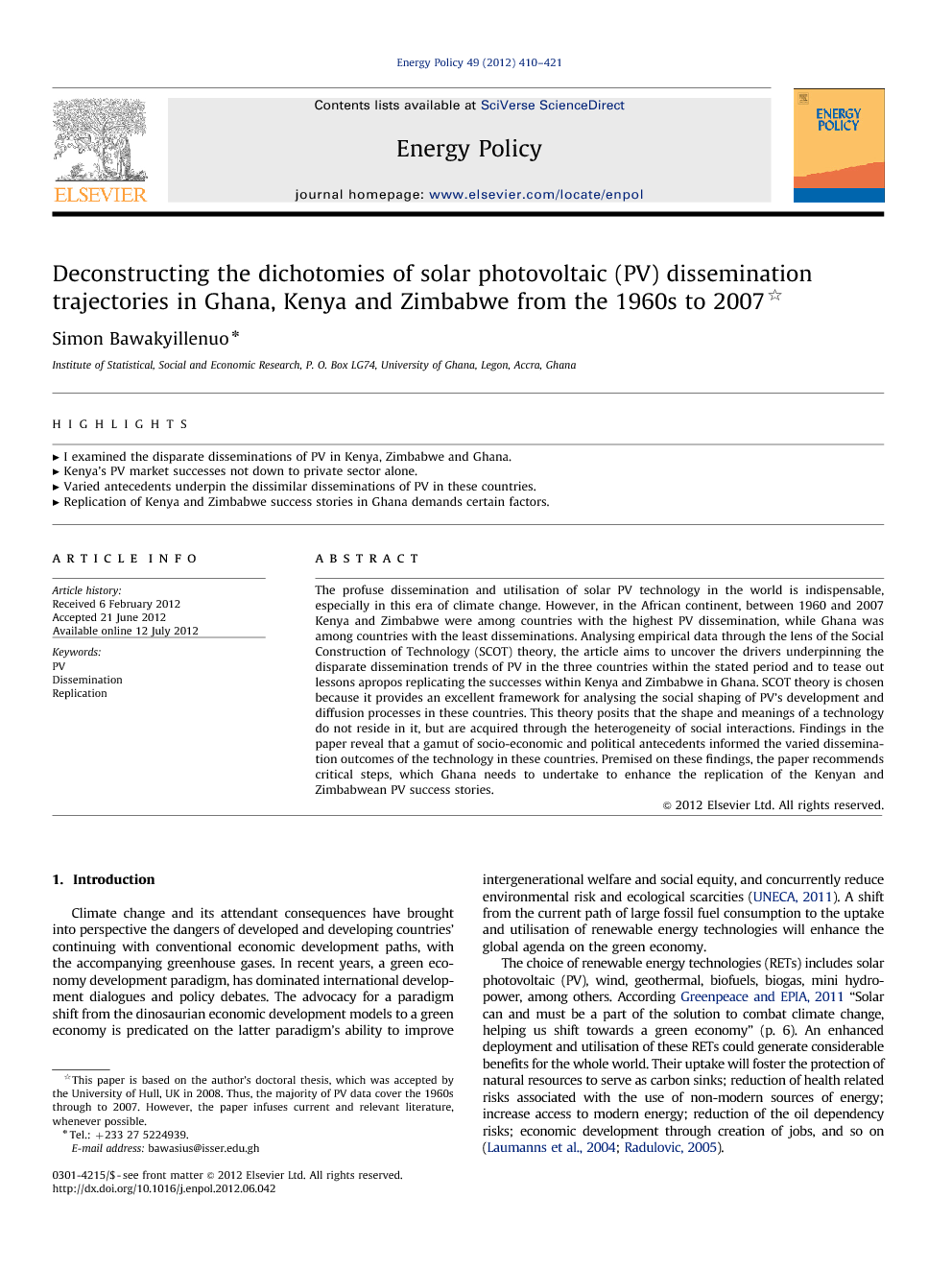 The profuse dissemination and utilisation of solar PV technology in the world is indispensable, especially in this era of climate change. However, in the African continent, between 1960 and 2007 Kenya and Zimbabwe were among countries with the highest PV dissemination, while Ghana was among countries with the least disseminations. Analysing empirical data through the lens of the Social Construction of Technology (SCOT) theory, the article aims to uncover the drivers underpinning the disparate dissemination trends of PV in the three countries within the stated period and to tease out lessons apropos replicating the successes within Kenya and Zimbabwe in Ghana. SCOT theory is chosen because it provides an excellent framework for analysing the social shaping of PV's development and diffusion processes in these countries. This theory posits that the shape and meanings of a technology do not reside in it, but are acquired through the heterogeneity of social interactions. Findings in the paper reveal that a gamut of socio-economic and political antecedents informed the varied dissemination outcomes of the technology in these countries. Premised on these findings, the paper recommends critical steps, which Ghana needs to undertake to enhance the replication of the Kenyan and Zimbabwean PV success stories.

Climate change and its attendant consequences have brought into perspective the dangers of developed and developing countries’ continuing with conventional economic development paths, with the accompanying greenhouse gases. In recent years, a green economy development paradigm, has dominated international development dialogues and policy debates. The advocacy for a paradigm shift from the dinosaurian economic development models to a green economy is predicated on the latter paradigm's ability to improve intergenerational welfare and social equity, and concurrently reduce environmental risk and ecological scarcities (UNECA, 2011). A shift from the current path of large fossil fuel consumption to the uptake and utilisation of renewable energy technologies will enhance the global agenda on the green economy. The choice of renewable energy technologies (RETs) includes solar photovoltaic (PV), wind, geothermal, biofuels, biogas, mini hydropower, among others. According Greenpeace and EPIA, 2011 “Solar can and must be a part of the solution to combat climate change, helping us shift towards a green economy” (p. 6). An enhanced deployment and utilisation of these RETs could generate considerable benefits for the whole world. Their uptake will foster the protection of natural resources to serve as carbon sinks; reduction of health related risks associated with the use of non-modern sources of energy; increase access to modern energy; reduction of the oil dependency risks; economic development through creation of jobs, and so on (Laumanns et al., 2004 and Radulovic, 2005). The natural resources for most of these RETs are ubiquitous. Solar energy, for example, is the most abundant energy resource on earth, and the reliability of PV technology has gained grounds over the years (IEA, 2010). The global PV market has been on the rise, particularly in this 21st Century. With a worldwide PV cumulative installed capacity of about 1.5 GW in 2000, it rose rapidly to roughly 40 GW in 2010, producing some 5 TW h of electricity annually (EPIA, 2011). Although very encouraging, the distribution of this cumulative installed capacity has been, however, very lopsided between continents and between countries. In Africa, for example, the dissemination of the technology has flourished in countries such as South Africa, Kenya and Zimbabwe, while many others including, Ghana, Uganda, Malawi among others, have lagged behind, and there is paucity of data giving understanding to such disparities. Examining empirical data and literature sources through the lens of the Social Construction of Technology (SCOT) theory, this article unlocks the varying antecedents that have underpinned the disparate dissemination trends of PV technology in Kenya, Zimbabwe and Ghana from 1960 to 2007. Kenya and Zimbabwe were chosen for this three-country analysis, because they are among the largest PV markets in Africa (Jacobson, 2004). In particular, the Kenyan PV market is viewed as an archetypal success story in the developing world (Duke et al., 2002 and Otieno, 2004). In contrast, Ghana appears to be one of the least developed PV markets in Africa. Based on the findings, the article draws lessons apropos the feasibility of Ghana replicating the high dissemination trends of PV in Kenya and Zimbabwe. Bryne (2009) study for example, revealed that initial attempts to replicate the success of the Kenyan SHS niche in Tanzania, failed. The primary reason for this failure is that the two countries have disparate institutional and political structures, which emanated from their dissimilar political and economic development paths in the past.