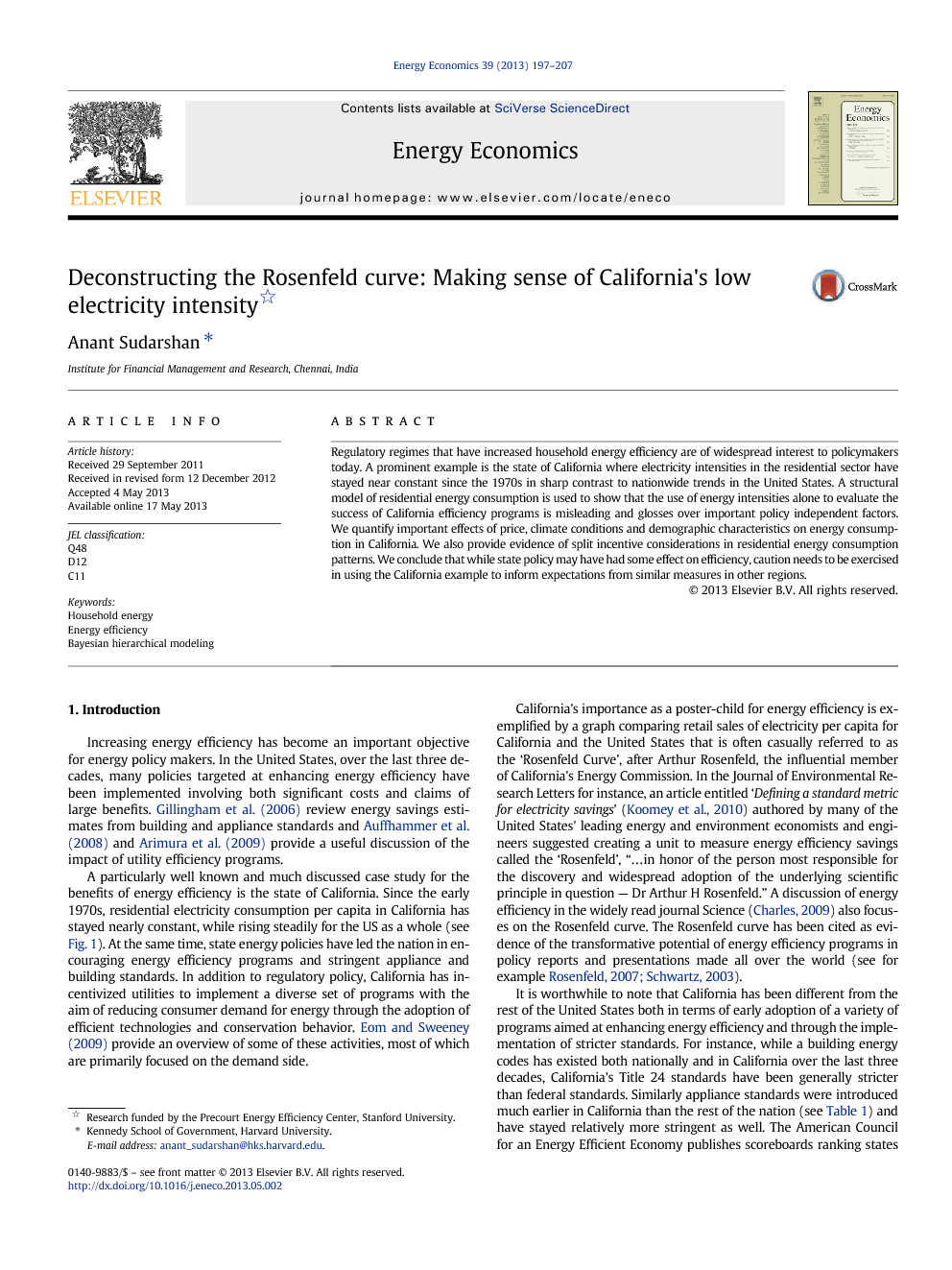 Regulatory regimes that have increased household energy efficiency are of widespread interest to policymakers today. A prominent example is the state of California where electricity intensities in the residential sector have stayed near constant since the 1970s in sharp contrast to nationwide trends in the United States. A structural model of residential energy consumption is used to show that the use of energy intensities alone to evaluate the success of California efficiency programs is misleading and glosses over important policy independent factors. We quantify important effects of price, climate conditions and demographic characteristics on energy consumption in California. We also provide evidence of split incentive considerations in residential energy consumption patterns. We conclude that while state policy may have had some effect on efficiency, caution needs to be exercised in using the California example to inform expectations from similar measures in other regions.

Increasing energy efficiency has become an important objective for energy policy makers. In the United States, over the last three decades, many policies targeted at enhancing energy efficiency have been implemented involving both significant costs and claims of large benefits. Gillingham et al. (2006) review energy savings estimates from building and appliance standards and Auffhammer et al. (2008) and Arimura et al. (2009) provide a useful discussion of the impact of utility efficiency programs. A particularly well known and much discussed case study for the benefits of energy efficiency is the state of California. Since the early 1970s, residential electricity consumption per capita in California has stayed nearly constant, while rising steadily for the US as a whole (see Fig. 1). At the same time, state energy policies have led the nation in encouraging energy efficiency programs and stringent appliance and building standards. In addition to regulatory policy, California has incentivized utilities to implement a diverse set of programs with the aim of reducing consumer demand for energy through the adoption of efficient technologies and conservation behavior. Eom and Sweeney (2009) provide an overview of some of these activities, most of which are primarily focused on the demand side. Sector-wise comparison of California and US electricity consumption. Source: EIA electricity sales figures. Figure options California's importance as a poster-child for energy efficiency is exemplified by a graph comparing retail sales of electricity per capita for California and the United States that is often casually referred to as the ‘Rosenfeld Curve’, after Arthur Rosenfeld, the influential member of California's Energy Commission. In the Journal of Environmental Research Letters for instance, an article entitled ‘Defining a standard metric for electricity savings’ ( Koomey et al., 2010) authored by many of the United States' leading energy and environment economists and engineers suggested creating a unit to measure energy efficiency savings called the ‘Rosenfeld’, “…in honor of the person most responsible for the discovery and widespread adoption of the underlying scientific principle in question — Dr Arthur H Rosenfeld.” A discussion of energy efficiency in the widely read journal Science ( Charles, 2009) also focuses on the Rosenfeld curve. The Rosenfeld curve has been cited as evidence of the transformative potential of energy efficiency programs in policy reports and presentations made all over the world (see for example Rosenfeld, 2007 and Schwartz, 2003). It is worthwhile to note that California has been different from the rest of the United States both in terms of early adoption of a variety of programs aimed at enhancing energy efficiency and through the implementation of stricter standards. For instance, while a building energy codes has existed both nationally and in California over the last three decades, California's Title 24 standards have been generally stricter than federal standards. Similarly appliance standards were introduced much earlier in California than the rest of the nation (see Table 1) and have stayed relatively more stringent as well. The American Council for an Energy Efficient Economy publishes scoreboards ranking states on their efforts to encourage energy efficiency. California has consistently ranked in the top few states in terms of program expenditures and other measures (see ACEEE, 2007, ACEEE, 2008 and ACEEE, 2009). Table 1. Date of setting of first appliance standards (Martin, 1997; via Gillingham et al., 2006). California National Refrigerators 1976 1990, 1992 Air conditioning 1976 1990 Heat pump 1977 1990 Clothes washers 1977 1988 Water heaters 1976 1990 Lamp ballasts 1983 1990 Table options Unfortunately, expenditures on efficiency programs have not been accompanied by equally rigorous evaluation of their effects. Aggregate statistics such as energy intensity (expressed per capita or otherwise) as well as other energy indices (including those obtained from index decomposition methods) are popular in the literature on applied energy policy literature. While useful for many purposes, caution should be exercised in drawing causal inferences from such statistics (see also Horowitz, 2008). While it is well understood that energy intensity is not the same as energy efficiency, this has not stopped energy intensity indices from being used as a metric of success or failure (with the Rosenfeld Curve being a good example). This paper seeks to use available household microdata to show that – for the residential sector at least – California's low energy intensities are a misleading measure to use to evaluate the success of failure of state run efficiency programs. Over 80% of the difference between California and United States per capita residential electricity consumption can be explained without recourse to any program interventions — in particular as a consequence of differences in climate, demographic differences, prices, appliance distributions, urbanization, fuel choices. We also suggest that specific efficiency policy measures such as building standards may have been most effective in modulating energy demand and find evidence of split incentive considerations influencing household energy consumption. In what follows, 2 and 3 set up the econometric model that we use to understand the nature of residential energy demand in California. Section 4 contains a description of the empirical data we use to estimate the parameters of the demand model and Section 5 describes the estimation methodology used. Section 6 introduces and discusses some of the results in detail. Section 7 synthesizes the effects of different factors and places them in the context of the Rosenfeld curve.

A fewfinal remarks are worth making here. Even though it appears that the influence of efficiency interventions may have been limited in scope, as Fig. 2 shows the impact on different household types is quite varied. Households with energy expenditures on heating and cooling end uses seem to be most clearly impacted. Yet with regard electricity demand these types are also only a relatively small fraction (especially in the case of air conditioning) of the California population. This would seem to suggest that the potential impact of similar policies – such as strong building standards and incentives to improve air-conditioner efficiency – might be much greater in regions that have more extreme climates. To make a broader methodological point, in the energy community, comparisons of energy intensity are very popular. This single metric (typically expressed per unit GDP instead of per capita) also remains fundamental to international climate change negotiations. Part of the motivation for this analysis has been to make the point that while indices such as energy intensities (andmore sophisticated versions derived from decomposition methods) can provide a great deal of insight, they also hide as much as they reveal. In particular, we need to be careful when we identify seemingly spectacular success stories screened on the basis of a single aggregate statistic. This paper attempts to show how even the limited data that exists can be used to obtain significant insight into consumer behavior and policy impact. Of course there remain important gaps in our knowledge of what works with regard efficiency policy, including in this paper. The only way to do a better job evaluating energy programs is to lay greater stress on collecting high quality micro-data and the use of more rigorous evaluation techniques such as randomized field trials.