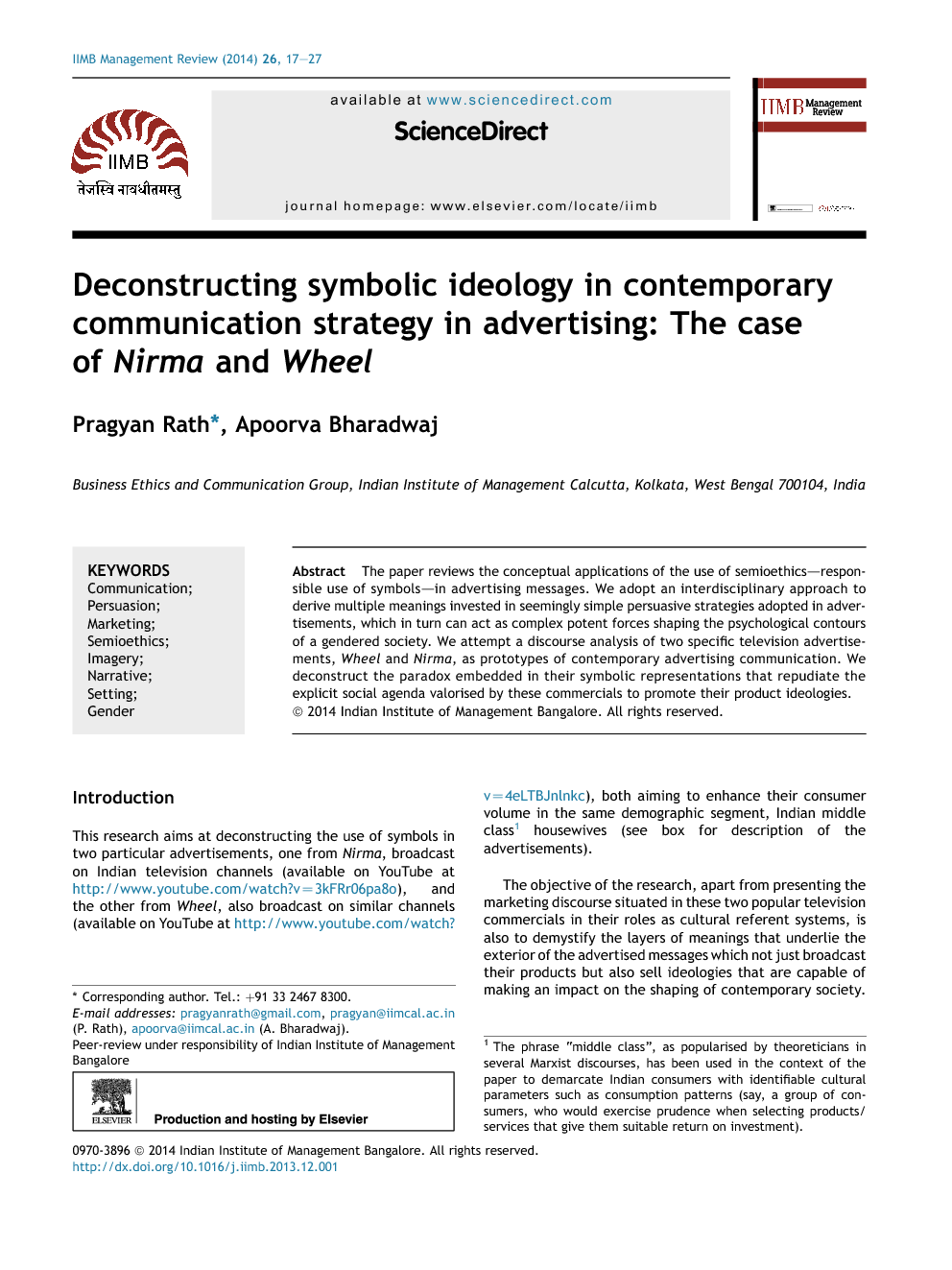 The paper reviews the conceptual applications of the use of semioethics—responsible use of symbols—in advertising messages. We adopt an interdisciplinary approach to derive multiple meanings invested in seemingly simple persuasive strategies adopted in advertisements, which in turn can act as complex potent forces shaping the psychological contours of a gendered society. We attempt a discourse analysis of two specific television advertisements, Wheel and Nirma, as prototypes of contemporary advertising communication. We deconstruct the paradox embedded in their symbolic representations that repudiate the explicit social agenda valorised by these commercials to promote their product ideologies.

This research aims at deconstructing the use of symbols in two particular advertisements, one from Nirma, broadcast on Indian television channels (available on YouTube at http://www.youtube.com/watch?v=3kFRr06pa8o), and the other from Wheel, also broadcast on similar channels (available on YouTube at http://www.youtube.com/watch?v=4eLTBJnlnkc), both aiming to enhance their consumer volume in the same demographic segment, Indian middle class 1 housewives (see box for description of the advertisements). The Nirma advertisement starts with four women driving a car and stopping at a point where they witness an ambulance stuck in a puddle with people (including men in corporate suits) looking on curiously. The men remain mute spectators without participating in the crisis situation as saviour-actors. It is at this stage that the women alight and applying their might, push the vehicle out of the puddle, with an expression of triumph defining their countenance, shaming the men standing around. The advertisement ends with the conventional Nirma refrain. On the other hand, the Wheel advertisement begins with a homemaker (well-known television actress, Prachi Desai) surprised to see that her old washing powder has been discarded by her husband (the reigning superstar of Hindi cinema, Salman Khan), who introduces a new washing powder (Wheel). The husband persuades his wife to accept the change of the product by delineating the qualities of Wheel as a washing powder with the power of lemon and the enticing fragrance of flowers. The advertisement ends with husband and wife playing around in the courtyard of their home, amidst clothes hanging out to dry, in a mood of romance, fun and frolic, celebrating marital felicity. The objective of the research, apart from presenting the marketing discourse situated in these two popular television commercials in their roles as cultural referent systems, is also to demystify the layers of meanings that underlie the exterior of the advertised messages which not just broadcast their products but also sell ideologies that are capable of making an impact on the shaping of contemporary society. According to Douglas B. Holt, in his work How Brands become Icons: The Principles of Cultural Branding: “…brands compete in myth markets, not product markets… [and] compete with other cultural products to perform myths that resolve cultural contradictions” ( Holt, 2004, p. 39; Schroeder, Buchanan-Oliver, & Cruz et al., 2010, p. 636). The researchers attempt to show the complex processes of resolving cultural contradictions through mythicisation, where myths themselves might be continuations of those very cultural contradictions that they are expected to demolish in their utopian depiction of cultures. Over the past few years, there has been substantial research on different strategies adopted for marketing communications and their impact on consumer perception. But little research is available on the application of symbol deconstruction in the imagery used in advertisements. According to Schroeder and Borgerson, “…outside of university courses in communication or cultural studies, there is relatively little education about marketing communication's social, cultural, and pedagogical roles, nor about the production, history, and theory of visual representation” (Schroeder & Borgerson, 2005, p. 581). Our research probes into the implications of the use of symbols as vehicles of social discourse. The intention is to examine the promotional vehicles of two popular products, Nirma and Wheel, found on the work shelf of Indian middle class women and demonstrate how the symbolic portrayal of a commercial can problematise its probable intended philosophy. Such studies can trigger new ways of critical thinking when planning communication strategies so that the aesthetic act of picking suitable symbols and imagery can be seen as an exercise in what Susan Petrilli calls semioethics or the responsible use of symbols ( Petrilli, 2010).

The methodology of this review rests on unearthing paradoxes or conflicting binaries that problematise the final revolutionary claim of the advertisements. The researchers willingly and humbly accept the limitation of choosing advertisements strategically that complement their review. These advertising messages have been culled to elucidate the content focus of the paper. There is no claim made over the epitome value of these commercial advertisements. Advertisements should not be treated as merely representational marketing campaigns but also as promotional vehicles that prod marketing communications researchers to focus on critical dimensions of marketing strategy that need thoughtful analysis; in other words, they are representational social campaigns as well. On a broader level, these marketing discourses can hint at interpretations of images and symbols embedded in advertisements and their social and cultural import. “The claim is not that some advertising, as well as other forms of marketing communications, might offend the concerned group and its members, but that certain forms of representation may limit their opportunities for the future by undermining or sabotaging their reputation” (Schroeder & Borgerson, 2005, p. 585).