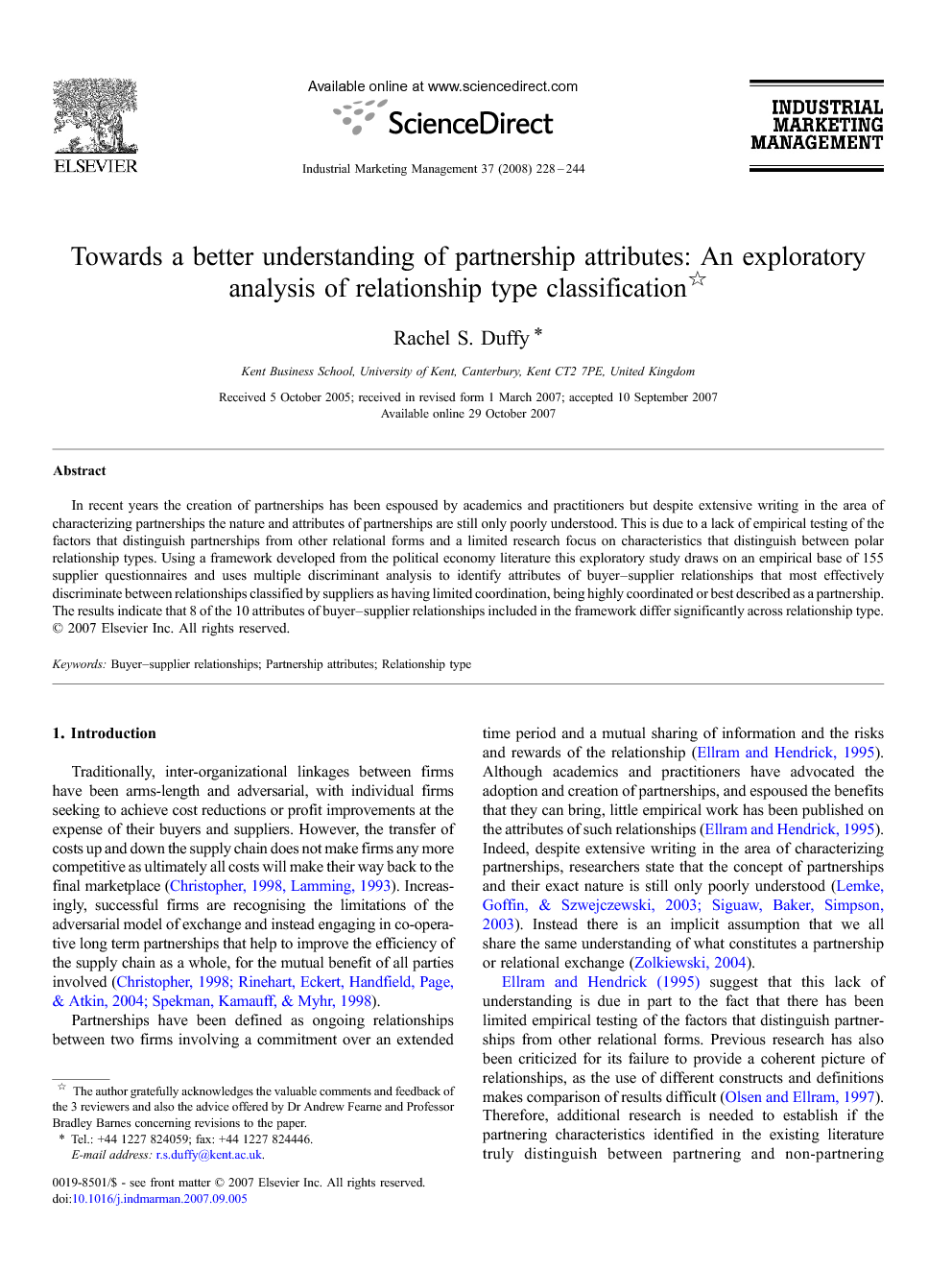 In recent years the creation of partnerships has been espoused by academics and practitioners but despite extensive writing in the area of characterizing partnerships the nature and attributes of partnerships are still only poorly understood. This is due to a lack of empirical testing of the factors that distinguish partnerships from other relational forms and a limited research focus on characteristics that distinguish between polar relationship types. Using a framework developed from the political economy literature this exploratory study draws on an empirical base of 155 supplier questionnaires and uses multiple discriminant analysis to identify attributes of buyer–supplier relationships that most effectively discriminate between relationships classified by suppliers as having limited coordination, being highly coordinated or best described as a partnership. The results indicate that 8 of the 10 attributes of buyer–supplier relationships included in the framework differ significantly across relationship type.

Traditionally, inter-organizational linkages between firms have been arms-length and adversarial, with individual firms seeking to achieve cost reductions or profit improvements at the expense of their buyers and suppliers. However, the transfer of costs up and down the supply chain does not make firms any more competitive as ultimately all costs will make their way back to the final marketplace (Christopher, 1998 and Lamming, 1993). Increasingly, successful firms are recognising the limitations of the adversarial model of exchange and instead engaging in co-operative long term partnerships that help to improve the efficiency of the supply chain as a whole, for the mutual benefit of all parties involved (Christopher, 1998, Rinehart et al., 2004 and Spekman et al., 1998). Partnerships have been defined as ongoing relationships between two firms involving a commitment over an extended time period and a mutual sharing of information and the risks and rewards of the relationship (Ellram and Hendrick, 1995). Although academics and practitioners have advocated the adoption and creation of partnerships, and espoused the benefits that they can bring, little empirical work has been published on the attributes of such relationships (Ellram and Hendrick, 1995). Indeed, despite extensive writing in the area of characterizing partnerships, researchers state that the concept of partnerships and their exact nature is still only poorly understood (Lemke et al., 2003 and Siguaw et al., 2003). Instead there is an implicit assumption that we all share the same understanding of what constitutes a partnership or relational exchange (Zolkiewski, 2004). Ellram and Hendrick (1995) suggest that this lack of understanding is due in part to the fact that there has been limited empirical testing of the factors that distinguish partnerships from other relational forms. Previous research has also been criticized for its failure to provide a coherent picture of relationships, as the use of different constructs and definitions makes comparison of results difficult (Olsen and Ellram, 1997). Therefore, additional research is needed to establish if the partnering characteristics identified in the existing literature truly distinguish between partnering and non-partnering relationships, and to better conceptualize what relational exchange and partnerships actually entail (Ellram and Hendrick, 1995, Frazier, 1999, Lemke et al., 2003 and Moberg and Speh, 2003). A poor understanding of how partnerships differ from other types of co-operative relationships results from a limited research focus on characteristics that distinguish between polar relationship types. Specifically, the focus of most research has been to compare partnerships and relational exchange to discrete, transactional or adversarial arms-length dealings (i.e. Dwyer et al., 1987, Frazier, 1999, Lambert et al., 1996, Lusch and Brown, 1996, Moberg and Speh, 2003 and Mohr and Nevin, 1990). However, it is widely acknowledged that most firms have already achieved cooperation and coordination with key segments of their suppliers and customers (Spekman et al., 1998). Therefore rather than a dichotomous focus on discrete market transactions at one end of a relationship continuum and partnerships at the other, it is important that future research focuses on identifying the critical differences between partnerships and other types of cooperative relationships, as researchers state that these differences have been largely ignored (Golicic and Mentzer, 2005, Hausman, 2001 and Laing and Lian, 2005). Therefore, the aim of this paper is to address this gap in the literature by comparing partnerships to relationships where some coordination of activities is specified to exist, rather than comparing partnerships to transactional relationships based on infrequent or ‘one off’ market exchanges. As firms' beliefs about others identify their behavioral predisposition towards them (Donaldson and O'Toole, 2000) the premise of the study is that firms that perceive a relationship as a partnership will be motivated to engage in different behaviors and actions from those that don't. Specifically, this study compares relationships perceived by suppliers to be a partnership, to those perceived by suppliers as being highly coordinated or as having limited coordination of activities (Fig. 1). These categories of relationship type are consistent with descriptions of buyer–supplier relationships and interaction intensity identified in previous research (i.e. Spekman et al., 1998 and Webster, 1992). In line with previous research, inter-organizational relationships are positioned in-between continuum anchors of market transactions and vertical integration (Golicic and Mentzer, 2005, Nevin, 1995, Rinehart et al., 2004 and Webster, 1992). As the end points of the continuum are not relationships they are not studied in the paper. In addition, relationships such as strategic alliances, joint ventures, franchising and licensing are not identified as points on the continuum as the discussion in this paper is restricted to vertical market relationships between buyers and suppliers rather than horizontal non market relationships.