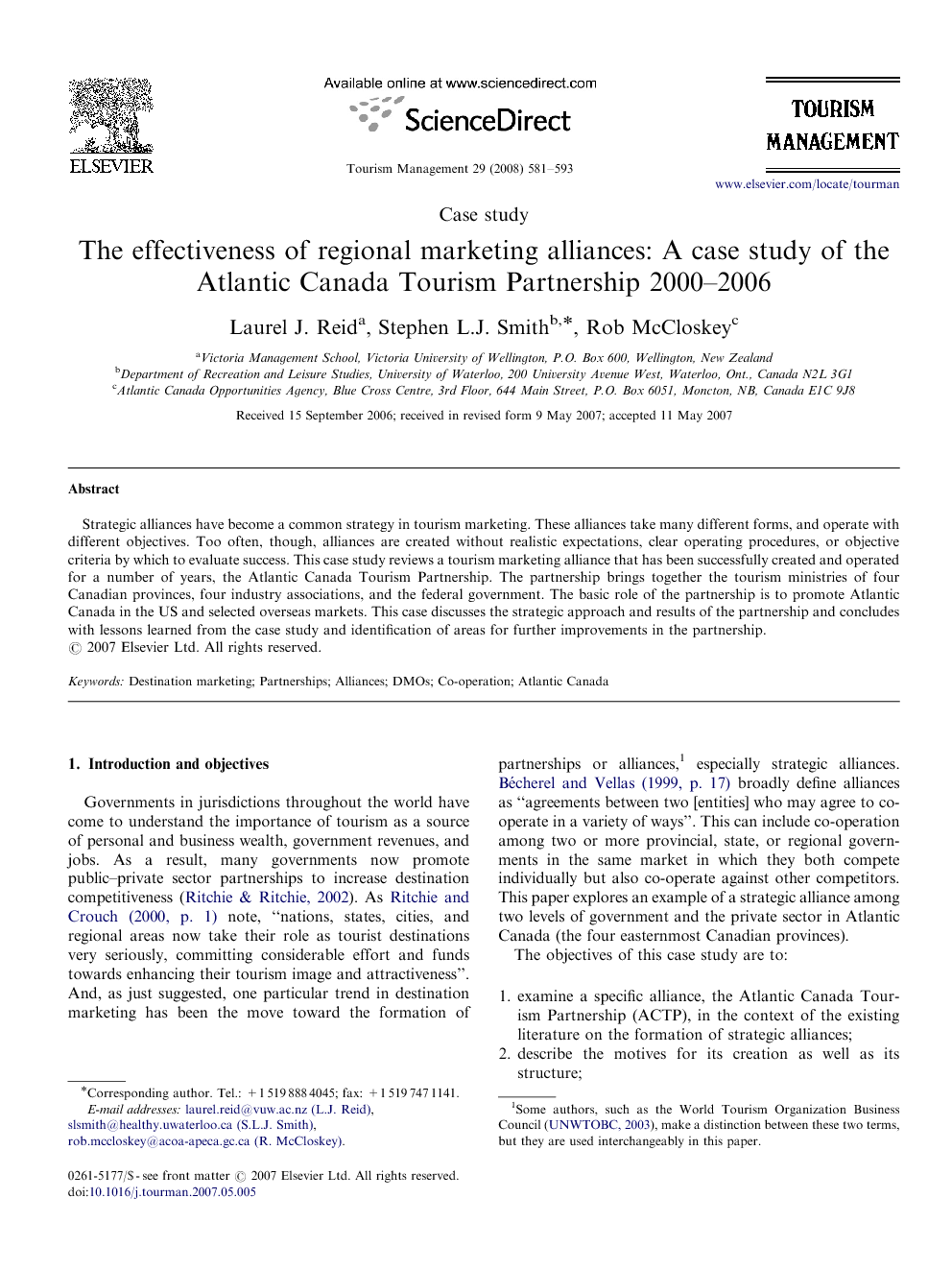 Strategic alliances have become a common strategy in tourism marketing. These alliances take many different forms, and operate with different objectives. Too often, though, alliances are created without realistic expectations, clear operating procedures, or objective criteria by which to evaluate success. This case study reviews a tourism marketing alliance that has been successfully created and operated for a number of years, the Atlantic Canada Tourism Partnership. The partnership brings together the tourism ministries of four Canadian provinces, four industry associations, and the federal government. The basic role of the partnership is to promote Atlantic Canada in the US and selected overseas markets. This case discusses the strategic approach and results of the partnership and concludes with lessons learned from the case study and identification of areas for further improvements in the partnership

Governments in jurisdictions throughout the world have come to understand the importance of tourism as a source of personal and business wealth, government revenues, and jobs. As a result, many governments now promote public–private sector partnerships to increase destination competitiveness (Ritchie & Ritchie, 2002). As Ritchie and Crouch (2000, p. 1) note, “nations, states, cities, and regional areas now take their role as tourist destinations very seriously, committing considerable effort and funds towards enhancing their tourism image and attractiveness”. And, as just suggested, one particular trend in destination marketing has been the move toward the formation of partnerships or alliances,1 especially strategic alliances. Bécherel and Vellas (1999, p. 17) broadly define alliances as “agreements between two [entities] who may agree to co-operate in a variety of ways”. This can include co-operation among two or more provincial, state, or regional governments in the same market in which they both compete individually but also co-operate against other competitors. This paper explores an example of a strategic alliance among two levels of government and the private sector in Atlantic Canada (the four easternmost Canadian provinces). The objectives of this case study are to: 1. examine a specific alliance, the Atlantic Canada Tourism Partnership (ACTP), in the context of the existing literature on the formation of strategic alliances; 2. describe the motives for its creation as well as its structure; 3. summarize marketing strategies and tactics for the key international markets targeted by ACTP; 4. examine management, governance, and communication practices and issues; and 5. summarize results of ACTP's activities within the context of its objectives as well as that of the larger Canadian tourism market.