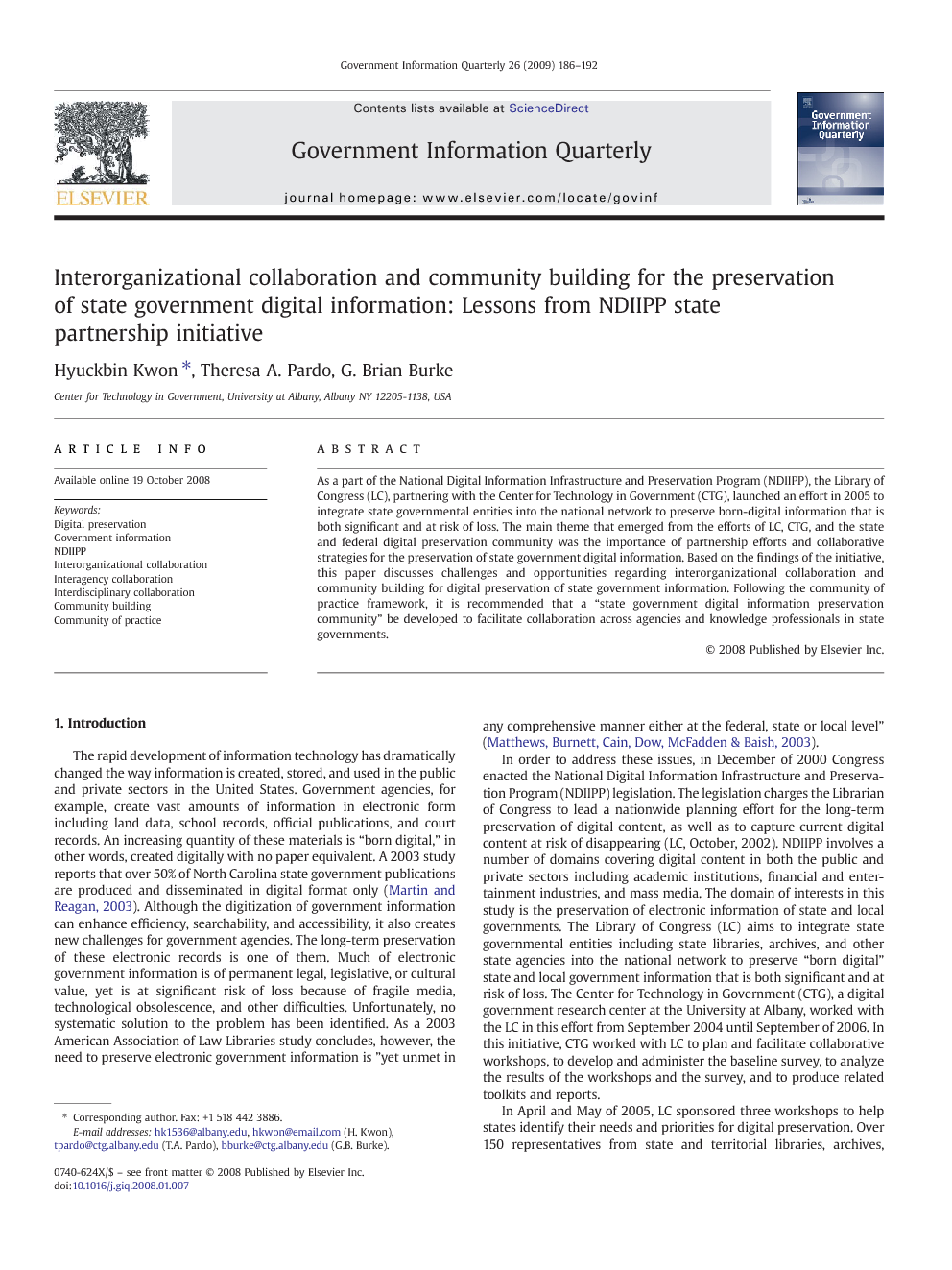 The rapid development of information technology has dramatically changed the way information is created, stored, and used in the public and private sectors in the United States. Government agencies, for example, create vast amounts of information in electronic form including land data, school records, official publications, and court records. An increasing quantity of these materials is “born digital,” in other words, created digitally with no paper equivalent. A 2003 study reports that over 50% of North Carolina state government publications are produced and disseminated in digital format only (Martin and Reagan, 2003). Although the digitization of government information can enhance efficiency, searchability, and accessibility, it also creates new challenges for government agencies. The long-term preservation of these electronic records is one of them. Much of electronic government information is of permanent legal, legislative, or cultural value, yet is at significant risk of loss because of fragile media, technological obsolescence, and other difficulties. Unfortunately, no systematic solution to the problem has been identified. As a 2003 American Association of Law Libraries study concludes, however, the need to preserve electronic government information is ”yet unmet in any comprehensive manner either at the federal, state or local level” (Matthews, Burnett, Cain, Dow, McFadden & Baish, 2003). In order to address these issues, in December of 2000 Congress enacted the National Digital Information Infrastructure and Preservation Program (NDIIPP) legislation. The legislation charges the Librarian of Congress to lead a nationwide planning effort for the long-term preservation of digital content, as well as to capture current digital content at risk of disappearing (LC, October, 2002). NDIIPP involves a number of domains covering digital content in both the public and private sectors including academic institutions, financial and entertainment industries, and mass media. The domain of interests in this study is the preservation of electronic information of state and local governments. The Library of Congress (LC) aims to integrate state governmental entities including state libraries, archives, and other state agencies into the national network to preserve “born digital” state and local government information that is both significant and at risk of loss. The Center for Technology in Government (CTG), a digital government research center at the University at Albany, worked with the LC in this effort from September 2004 until September of 2006. In this initiative, CTG worked with LC to plan and facilitate collaborative workshops, to develop and administer the baseline survey, to analyze the results of the workshops and the survey, and to produce related toolkits and reports. In April and May of 2005, LC sponsored three workshops to help states identify their needs and priorities for digital preservation. Over 150 representatives from state and territorial libraries, archives, records management units, and information technology departments participated in these workshops. One of the themes emerging from the workshops was the importance of partnerships within and across states for preservation of state government digital information. Workshop participants showed strong interest in baseline information regarding digital preservation activities of other state governments in order to identify and launch partnership development efforts. In response to this interest, between January and February of 2006, CTG administered a baseline survey of 125 individuals representing state and territorial librarians, archivists, and records managers in order to gather information about at-risk government digital information, the role of regulatory frameworks, and preservation activities underway in state governments. The main theme emerging from the workshops and the survey was the importance of partnership efforts and collaborative strategies for the preservation of state government digital information. This paper presents the challenges and opportunities regarding interorganizational collaboration and community building for digital preservation of state government information that emerged from the workshops and baseline survey and makes recommendations for digital preservation practitioners in state governments.

One of the basic themes emerging from the 2005 workshops and the 2006 survey was the need for collaboration between librarians, archivists, records managers, and IT staff to preserve the digital information of state governments. The findings show that these information professionals in state governments are willing to collaborate with one another, as partnerships present great opportunities for them, but that they face challenges including different interests and professional culture, a lack of common understanding of issues and values, and language barriers. In order to reconcile the different perspectives of information professionals, and to make full use of their expertise, a “state government digital information preservation community” can be established and incorporated into the national digital preservation network. The community, composed of librarians, archivists, records managers, CIOs and IT staff in state governments, and supported by LC, could promote collaboration for digital preservation within a state (as well as between states) by sharing best practices and information and conducting joint projects. As discussed above, various efforts by information professionals in state governments are already underway to build a foundation for such a community of practice. Some findings of the survey provide particularly useful insights for digital preservation partnerships within states. Survey results indicate that authority and responsibility for digital preservation-related standards-setting and digital preservation services are divided among a number of agencies/units within each state. This division of labor is one of the more challenging conditions in the environment. Its impact could be mitigated by building partnerships among state-level LARM units and those units located within legislative and judicial agencies. Building partnerships with those who share authority over the standards-setting processes and responsibility for providing digital preservation services appears well-advised. Also, other new intra-state partners should include the state IT department. Of note, ten states indicated in their survey responses that the equivalent of their state IT department (or a committee or commission formed by their state IT department) is a partner in the digital preservation activity they described. These and other efforts can serve as models for other states in building new relationships between and among state LARM units and state and agency level IT units. For partnerships across states, and between states and federal government, the following recommendations can be made: First: Establish more formal partnership structures between states in order to facilitate communication and protect collaboration and institutional legitimacy from political changes. Second: Adopt a centralized distributed model as the structural model for collaboration in order to benefit from economies-of-scale in infrastructure investments and diverse expertise. In this approach, LC could help states to identify and preserve their own records by providing funding, facilitated standards development, and coordination. Third: LC could function as a clearinghouse for standards, models, and best practices for digital preservation of state government information in order to facilitate communication and knowledge-sharing between states. The baseline data and the state profiles introduced above can provide a wealth of data to support a range of uses by the digital preservation community. The data will have most value to the community, however, if used and improved upon in the development of partnerships, in making a case to agency leaders or elected officials for investments in digital preservation, and for creating new synergies and new knowledge within and across states about digital preservation challenges and opportunities. As the findings from the workshops and survey suggest, interorganizational and interprofessional collaboration is only one of many important issues involved in the preservation of government digital information. Future research efforts will need to address other problems such as content appraisal and selection, the choice of metadata and preservation standards, sustainable funding, and long-term access to records as well.