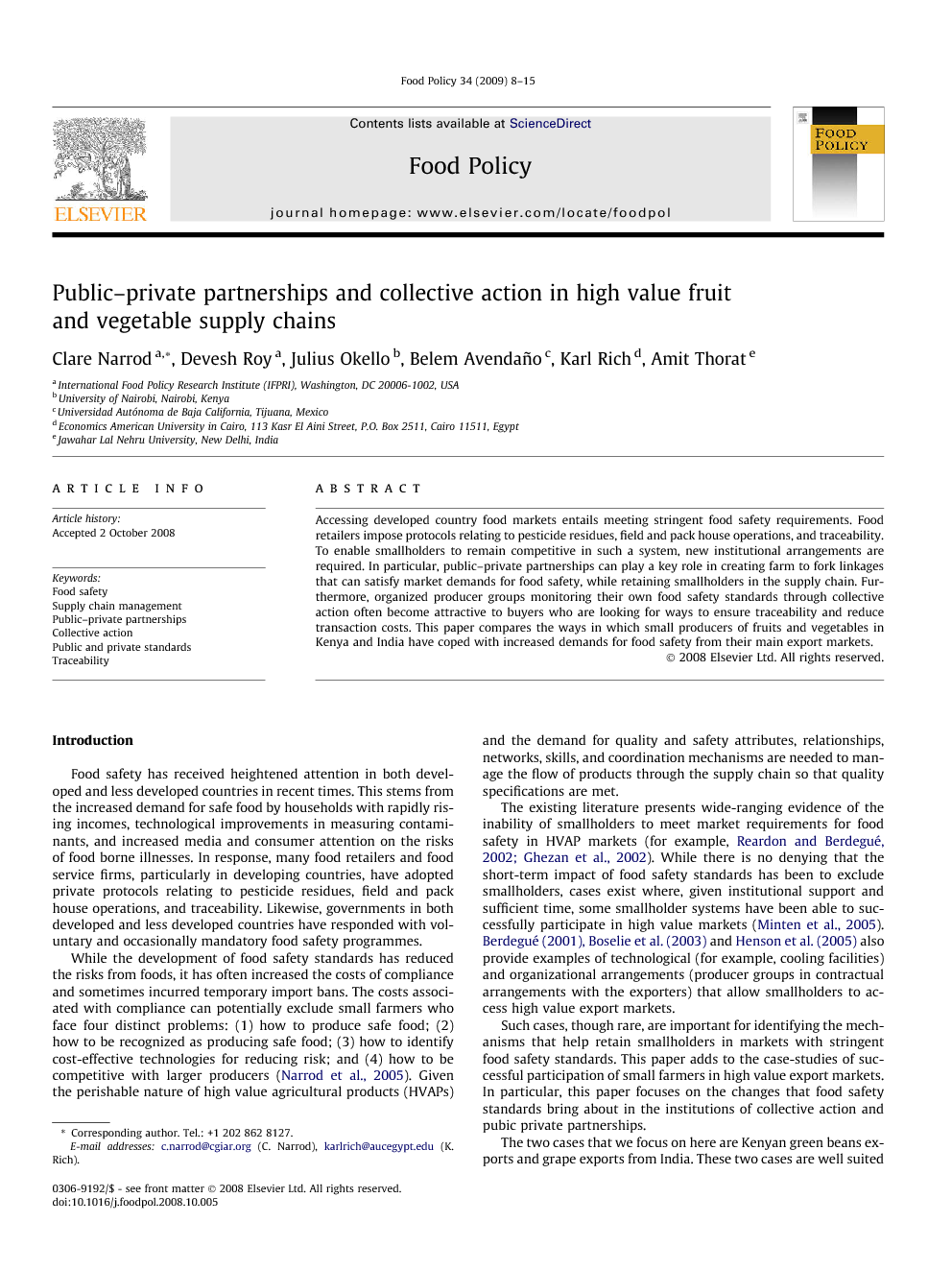 Accessing developed country food markets entails meeting stringent food safety requirements. Food retailers impose protocols relating to pesticide residues, field and pack house operations, and traceability. To enable smallholders to remain competitive in such a system, new institutional arrangements are required. In particular, public–private partnerships can play a key role in creating farm to fork linkages that can satisfy market demands for food safety, while retaining smallholders in the supply chain. Furthermore, organized producer groups monitoring their own food safety standards through collective action often become attractive to buyers who are looking for ways to ensure traceability and reduce transaction costs. This paper compares the ways in which small producers of fruits and vegetables in Kenya and India have coped with increased demands for food safety from their main export markets.

Food safety has received heightened attention in both developed and less developed countries in recent times. This stems from the increased demand for safe food by households with rapidly rising incomes, technological improvements in measuring contaminants, and increased media and consumer attention on the risks of food borne illnesses. In response, many food retailers and food service firms, particularly in developing countries, have adopted private protocols relating to pesticide residues, field and pack house operations, and traceability. Likewise, governments in both developed and less developed countries have responded with voluntary and occasionally mandatory food safety programmes. While the development of food safety standards has reduced the risks from foods, it has often increased the costs of compliance and sometimes incurred temporary import bans. The costs associated with compliance can potentially exclude small farmers who face four distinct problems: (1) how to produce safe food; (2) how to be recognized as producing safe food; (3) how to identify cost-effective technologies for reducing risk; and (4) how to be competitive with larger producers (Narrod et al., 2005). Given the perishable nature of high value agricultural products (HVAPs) and the demand for quality and safety attributes, relationships, networks, skills, and coordination mechanisms are needed to manage the flow of products through the supply chain so that quality specifications are met. The existing literature presents wide-ranging evidence of the inability of smallholders to meet market requirements for food safety in HVAP markets (for example, Reardon and Berdegué, 2002 and Ghezan et al., 2002). While there is no denying that the short-term impact of food safety standards has been to exclude smallholders, cases exist where, given institutional support and sufficient time, some smallholder systems have been able to successfully participate in high value markets (Minten et al., 2005). Berdegué, 2001 and Boselie et al., 2003 and Henson et al. (2005) also provide examples of technological (for example, cooling facilities) and organizational arrangements (producer groups in contractual arrangements with the exporters) that allow smallholders to access high value export markets. Such cases, though rare, are important for identifying the mechanisms that help retain smallholders in markets with stringent food safety standards. This paper adds to the case-studies of successful participation of small farmers in high value export markets. In particular, this paper focuses on the changes that food safety standards bring about in the institutions of collective action and pubic private partnerships. The two cases that we focus on here are Kenyan green beans exports and grape exports from India. These two cases are well suited to identify the organizational changes following the tightening of the food safety standards. In both cases collective action in the form of producer groups existed prior to the food safety shocks. The imposition of tighter food safety standards—in levels of standards or in terms of high consignment rejections—led to significant organizational changes, resulting in new forms of collective action that try to minimize the asymmetries in information across principal (exporter) and agent (the farmers). The role of collective action (in terms of producer groups) and public–private partnerships in enabling smallholders to access high value markets is well established in the literature (see the papers on successful cases above). Food safety standards alter collective action in two principal ways that we capture in the cases-studied in this paper. First, beyond the organization into producer groups to achieve scale economies, collective action in the presence of food safety standards gets increasingly driven by differences in comparative advantages; an example of this would be collective action between a group of farmers and agents with expertise in marketing. Berdegué (2001) refers to it as a multiple agent framework. Second, food safety standards necessitate the role of collective action in solving information asymmetry problems; for example, group composition may be chosen to solve adverse selection problems, and group monitoring may be used to solve moral hazard problems. The conventional role of collective action, i.e. exploitation of scale economies, also applies with food safety standards: traceability, which is central to the system with food safety standards, is more economical to achieve collectively. Apart from highlighting the economic rationale behind the organizational changes in collective action and public–private partnerships, this paper emphasizes the complementarity between the two arrangements in determining the outcomes. There are independent roles as well for these arrangements, but there are crucial complementarities that food safety standards bring about. The best example is lumpy investments where pooling of resources by farmers can defray costs, but is often insufficient unless other parties extend funds through interlinked arrangements or through a loan subsidy. Similarly, as the Kenya example shows, government might play a role in organizing members to deal with the problem of free riding in the initial stages of formation. The paper is organized as follows. First, we look at the delivery of fruits and vegetables to markets with food safety standards and discuss the implications for smallholders. We then show how supply chains incorporate food safety requirements in the two cases. The role of various institutions in ensuring that smallholders meet food safety standards is described next. Finally, we conclude with a discussion of the policy messages from these cases.