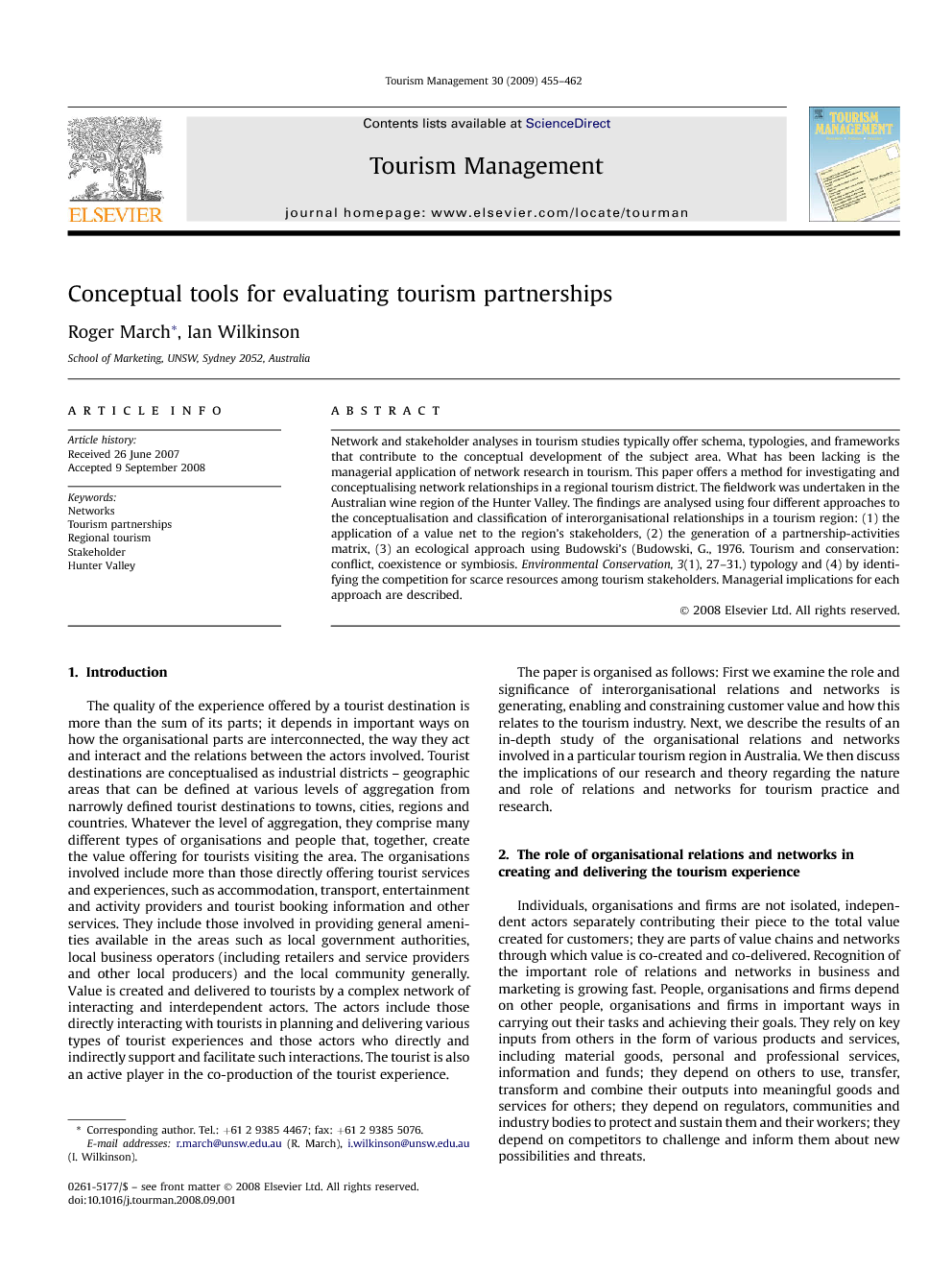 Network and stakeholder analyses in tourism studies typically offer schema, typologies, and frameworks that contribute to the conceptual development of the subject area. What has been lacking is the managerial application of network research in tourism. This paper offers a method for investigating and conceptualising network relationships in a regional tourism district. The fieldwork was undertaken in the Australian wine region of the Hunter Valley. The findings are analysed using four different approaches to the conceptualisation and classification of interorganisational relationships in a tourism region: (1) the application of a value net to the region's stakeholders, (2) the generation of a partnership-activities matrix, (3) an ecological approach using Budowski's (Budowski, G., 1976. Tourism and conservation: conflict, coexistence or symbiosis. Environmental Conservation, 3(1), 27–31.) typology and (4) by identifying the competition for scarce resources among tourism stakeholders. Managerial implications for each approach are described.

The quality of the experience offered by a tourist destination is more than the sum of its parts; it depends in important ways on how the organisational parts are interconnected, the way they act and interact and the relations between the actors involved. Tourist destinations are conceptualised as industrial districts – geographic areas that can be defined at various levels of aggregation from narrowly defined tourist destinations to towns, cities, regions and countries. Whatever the level of aggregation, they comprise many different types of organisations and people that, together, create the value offering for tourists visiting the area. The organisations involved include more than those directly offering tourist services and experiences, such as accommodation, transport, entertainment and activity providers and tourist booking information and other services. They include those involved in providing general amenities available in the areas such as local government authorities, local business operators (including retailers and service providers and other local producers) and the local community generally. Value is created and delivered to tourists by a complex network of interacting and interdependent actors. The actors include those directly interacting with tourists in planning and delivering various types of tourist experiences and those actors who directly and indirectly support and facilitate such interactions. The tourist is also an active player in the co-production of the tourist experience. The paper is organised as follows: First we examine the role and significance of interorganisational relations and networks is generating, enabling and constraining customer value and how this relates to the tourism industry. Next, we describe the results of an in-depth study of the organisational relations and networks involved in a particular tourism region in Australia. We then discuss the implications of our research and theory regarding the nature and role of relations and networks for tourism practice and research.

The need for regional tourism destinations to more effectively and efficiently organise and manage their tourism networks formed the genesis of this research. In the manner typical of network research in tourism, the researchers undertook an in-depth case study that produced a description of the connections and interactions between actors, as illustrated in Fig. 1 (see also, for example, Cooper and Scott, 2006, Pavlovich, 2003, Pforr, 2006 and Pforr and Thompson, 2006). As we have argued, however, tourism networks are discrete and organic entities, and the description of one, regardless of the complexity extracted and the nuanced taxonomy applied or created, does not necessarily generate easily generalizable lessons and insights for managers of other tourism destinations. For that reason, the authors proposed four analytical tools/approaches that destination managers could employ to render richer insights into the nature and utility of interorganisational relationships in their regions. Such managerial tools offer destination organisations the potential of increasing efficiencies and highlighting impediments in their current networks. This paper will, hopefully, stimulate further research into the monitoring and evaluation of tourism networks. The most obvious research question is how destination managers can and should effectively apply these suggested tools to monitor and enhance interorganisational effectiveness. Secondly, mapping the structural change and evolution of tourism industry clusters (such as accommodation, attractions, and transport) in mature tourist regions would provide indicators for the development of future clusters in emerging regions or in the reorganisation of existing clusters. Thirdly, a comparative study of the impact of strong and weak interorganisational ties on the behaviour and performance of tourism firms in regional destinations would lead to further conceptual development of network theory as well as provide insights for the effective management of destinations by tourism managers. Fourthly, while no exemplar of a tourism network is proposed here, fundamental principles of effective interorganisational relationships do exist. An audit of the structural integrity of existing regional tourism networks – in particular the top-down mechanisms for information sharing, funding and marketing cooperation – would generate further insights into their sustainability. The research reported here reaffirms that tourism networks are complex and mutable entities that develop and evolve over time in response to environmental and organisational developments and demands. They comprise a multitude of stakeholders that cross sectoral, administrative and geographical boundaries. A network can have goals which, at times, can be identified with difficulty and therefore can not be fully managed (Ritter et al., 2004). Fennell and Butler (2003) echo this perspective: “tourism in destination regions or communities is rarely managed, even when it has been planned” (p. 208). Kaltenborn (1996) adds another dimension to our understanding of the problems faced: “tourism management and the commercial tourism industry represent two very different systems that operate on very different assumptions and requirements, but that often lay claim to the same resources” (p. 26). The key challenge for managers of regional tourism destinations is the adroit management of the balance between the forces of competition for customers and resources on one hand and the cooperation required to stimulate visitor demand, ensure (to the extent possible) mutually supplied tourist experiences, effectively manage the relationship between themselves and tourism firms and enhance collaboration among tourism firms. As such, the development and management of productive relations and networks among the myriad of organisations involved in regional tourism should be an important focus of attention for researchers, practitioners and policy-makers alike.