عنوان انگلیسی
Being fair and being seen to be fair: Corporate reputation and CSR partnerships
دانلود فوری مقاله + سفارش ترجمه 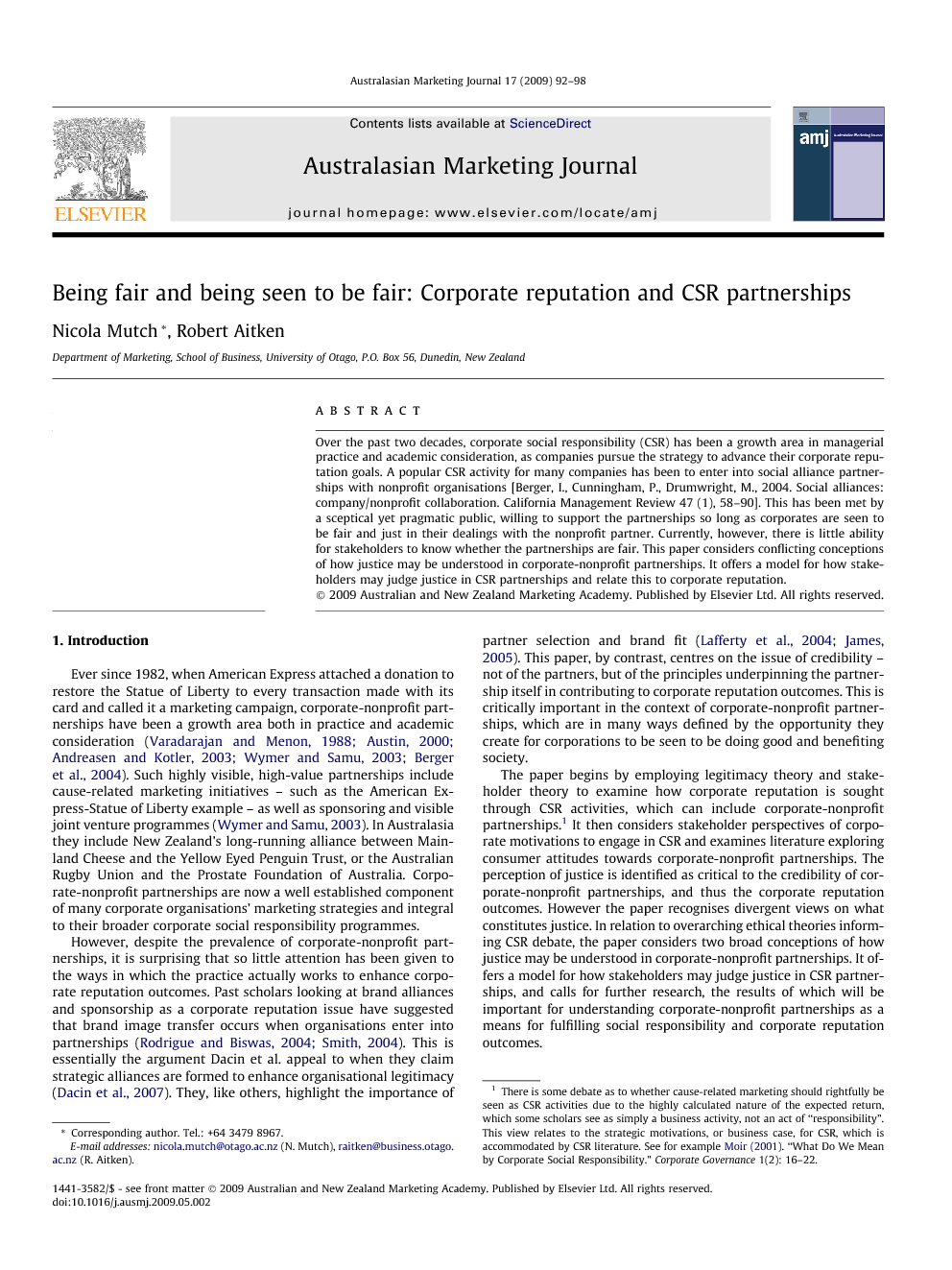 Over the past two decades, corporate social responsibility (CSR) has been a growth area in managerial practice and academic consideration, as companies pursue the strategy to advance their corporate reputation goals. A popular CSR activity for many companies has been to enter into social alliance partnerships with nonprofit organisations [Berger, I., Cunningham, P., Drumwright, M., 2004. Social alliances: company/nonprofit collaboration. California Management Review 47 (1), 58–90]. This has been met by a sceptical yet pragmatic public, willing to support the partnerships so long as corporates are seen to be fair and just in their dealings with the nonprofit partner. Currently, however, there is little ability for stakeholders to know whether the partnerships are fair. This paper considers conflicting conceptions of how justice may be understood in corporate-nonprofit partnerships. It offers a model for how stakeholders may judge justice in CSR partnerships and relate this to corporate reputation.

Currently a gap exists between the public face of corporate-nonprofit partnerships, trumpeted as joyous, win-win situations, and the decidedly more sceptical view held by some members of society. In Fig. 2, it is posited that the judgments individual stakeholders make about the fairness of the partnerships are informed by: (a) the social context in which individuals develop their understandings of power and justice, (b) the personal positions they have developed regarding power and justice, and, (c) the signals and information received regarding justice in the partnership which is informed by their interpretation of the reputation of the corporate partner. Where the signals and information conflict with perceived behaviour, as in scenarios 2 and 3, reputation is critically and negatively affected. The role of marketing in this situation is to ensure that internal communications and external promotion are consistent and reinforce both the nature and the spirit of the partnership. Where the reciprocal value of a partnership is clear and unambiguous, communication and promotion are relatively easy. Relationships are more robust and reputations more credible. Thus developing a reputation based on strong ethical principles increases the likelihood of partnerships being understood as well-founded on principles of justice. If corporate-nonprofit partnerships are established as one of the means for enhancing corporate reputation, then it is critical this goal is not undermined by behaving in a way that could be construed as unjust or exploitative. Equally, it is important that the goodwill intended to be generated by such a partnership is not compromised at the outset by entrenched cynicism about corporate motives. Marketing has a significant role to play in this process of clarification and representation. However, it is surprising that despite justice being critical to how stakeholders perceive the credibility of corporate and nonprofit partnerships, CSR, the reputations of the partners and the reputation of the corporate sector in general, very little evidence is offered to stakeholders to help them make such judgments. Partnerships are negotiated behind closed doors, and few if any terms and conditions are disclosed. A more proactive and communication-based approach in terms of corporate reputation management might enable corporations and their stakeholders to develop more open and potentially more trusting relationships.