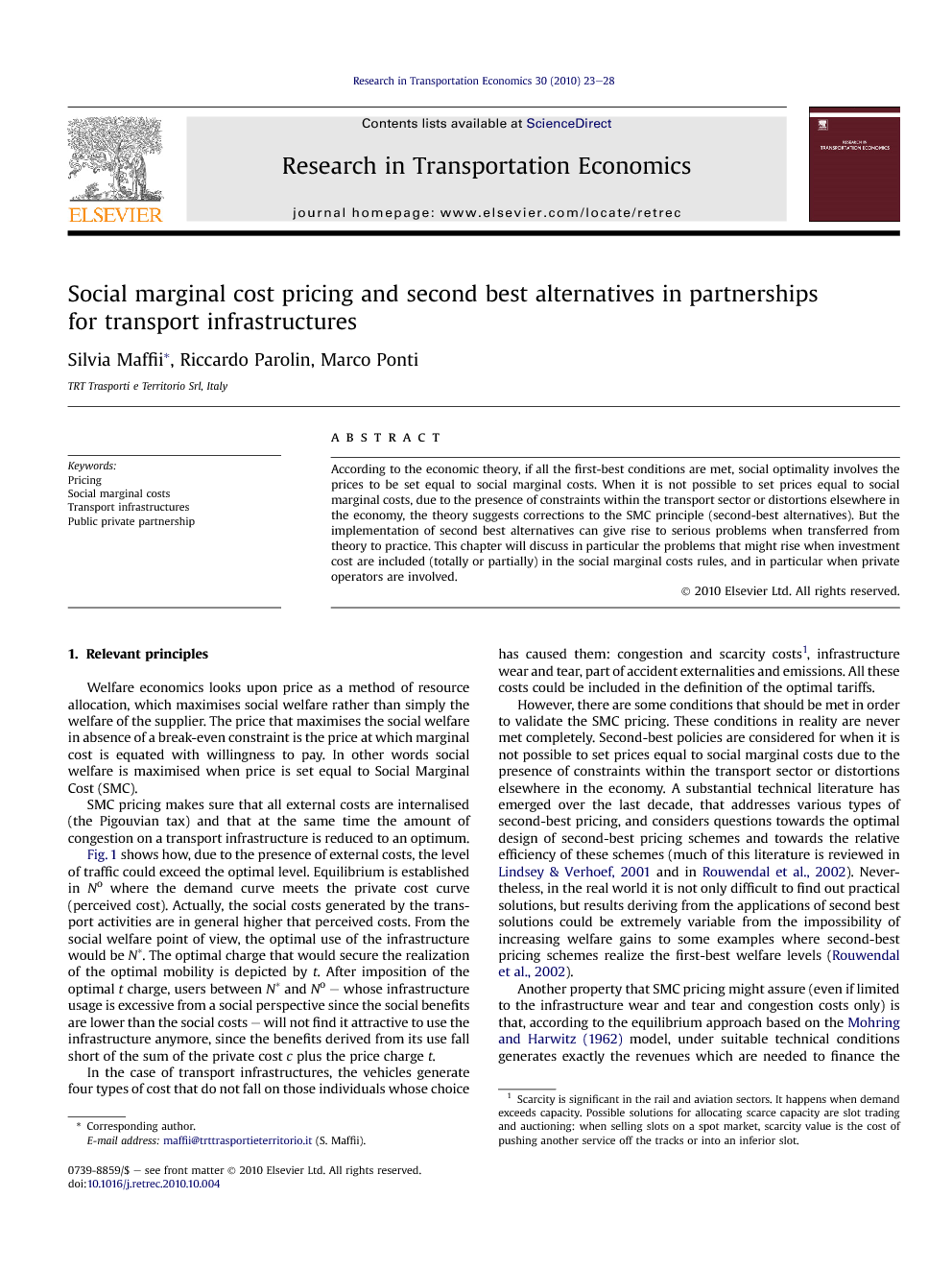 According to the economic theory, if all the first-best conditions are met, social optimality involves the prices to be set equal to social marginal costs. When it is not possible to set prices equal to social marginal costs, due to the presence of constraints within the transport sector or distortions elsewhere in the economy, the theory suggests corrections to the SMC principle (second-best alternatives). But the implementation of second best alternatives can give rise to serious problems when transferred from theory to practice. This chapter will discuss in particular the problems that might rise when investment cost are included (totally or partially) in the social marginal costs rules, and in particular when private operators are involved.

Welfare economics looks upon price as a method of resource allocation, which maximises social welfare rather than simply the welfare of the supplier. The price that maximises the social welfare in absence of a break-even constraint is the price at which marginal cost is equated with willingness to pay. In other words social welfare is maximised when price is set equal to Social Marginal Cost (SMC). SMC pricing makes sure that all external costs are internalised (the Pigouvian tax) and that at the same time the amount of congestion on a transport infrastructure is reduced to an optimum. Fig. 1 shows how, due to the presence of external costs, the level of traffic could exceed the optimal level. Equilibrium is established in No where the demand curve meets the private cost curve (perceived cost). Actually, the social costs generated by the transport activities are in general higher that perceived costs. From the social welfare point of view, the optimal use of the infrastructure would be N∗. The optimal charge that would secure the realization of the optimal mobility is depicted by t. After imposition of the optimal t charge, users between N∗ and No – whose infrastructure usage is excessive from a social perspective since the social benefits are lower than the social costs – will not find it attractive to use the infrastructure anymore, since the benefits derived from its use fall short of the sum of the private cost c plus the price charge t. In the case of transport infrastructures, the vehicles generate four types of cost that do not fall on those individuals whose choice has caused them: congestion and scarcity costs1, infrastructure wear and tear, part of accident externalities and emissions. All these costs could be included in the definition of the optimal tariffs. However, there are some conditions that should be met in order to validate the SMC pricing. These conditions in reality are never met completely. Second-best policies are considered for when it is not possible to set prices equal to social marginal costs due to the presence of constraints within the transport sector or distortions elsewhere in the economy. A substantial technical literature has emerged over the last decade, that addresses various types of second-best pricing, and considers questions towards the optimal design of second-best pricing schemes and towards the relative efficiency of these schemes (much of this literature is reviewed in Lindsey & Verhoef, 2001 and in Rouwendal et al., 2002). Nevertheless, in the real world it is not only difficult to find out practical solutions, but results deriving from the applications of second best solutions could be extremely variable from the impossibility of increasing welfare gains to some examples where second-best pricing schemes realize the first-best welfare levels (Rouwendal et al., 2002). Another property that SMC pricing might assure (even if limited to the infrastructure wear and tear and congestion costs only) is that, according to the equilibrium approach based on the Mohring and Harwitz (1962) model, under suitable technical conditions generates exactly the revenues which are needed to finance the network (Cost Recovery Theorem – CRT). The most important conditions are that 1) capacity is perfectly divisible and can be expanded at constant marginal cost, and that 2) user costs are homogeneous of degree zero in capacity and usage2. Mohring concludes “setting marginal cost prices for highway trips and, more generally, transportation services is not necessarily incompatible with having a self-supporting system” (Mohring, 1976). This theoretical conclusion opens up a set of empirical questions about economies of scale in transport, and about continuous capacity. Many studies have tried to verify the applicability of the CRT. Empirical evidence on economies of scale in infrastructure varies by transport mode. As far as roads are concerned, the issue is still controversial, but there is a wide agreement in transport engineering that infrastructure yields increasing returns to scale, not only in the construction costs, but also because with increased capacity disturbances stemming from the mix of vehicles can be treated more efficiently (Kraus, 1981 and Rothengatter, 2005), and because of substantial scale economies in durability with respect to pavement thickness. Railways exhibit economies of density and the average cost curve is U-shaped with respect to network size (Preston, 1996). There is evidence of scale economies for traffic volumes up to 3–4 million passengers/year in airports (Doganis, 1992). Furthermore, due to investment indivisibility (road capacity is discrete because of traffic lanes, indivisibilities are important for runway capacity, for seaports and railways), capacity could never reach the optimum level. It is possible to conclude that while the CRT represents a useful theoretical instrument, it cannot be considered as a rule to be universally applied (de Palma & Lindsey, 2005): under second-best conditions (inability to toll a whole network, competing modes priced above or below SMC, impossibility to readjust capacity according to traffic volumes because of indivisibilities, past investment sub-optimal, etc.) the implications of SMC pricing for cost recovery are not clear-cut (Laird et al., 2003). If social marginal cost pricing will lead to deficit, it can be funded by taxes; otherwise, a constraint must be imposed on the infrastructure manager in order to finance part of the construction costs. Both these situations require second-best prices.

There is a well grounded risk for PPP to be highly inefficient, for various reasons the main ones seem to be the following: they often end up in an inefficient allocation of traffic flows both within different routes of the same mode and among different modes; there are rather large “capture” risks, particularly in the renegotiation phases; the allocation of demand risks is in many cases fictitious, the infrastructure operators are not in the position to control future traffic demand, as many variables (economic growth, oil prices, pricing policies, new infrastructures) are outside their control, as a consequence this might end up in an unjustified increase of costs (the private operator is charging for some risk that it is not really taking) In order to deal with this flexible solutions and accurate case by case cost-benefit of PPP, are required, comparing potential advantages and risks of PPP schemes with more transparent and traditional separation of construction activities from operations, awarded periodically in competitive terms (knowing that most likely in many cases the answer will be “no”, even against political favour for this solution, due to the circumvention of fiscal constraints that it allows for). Given the problems highlighted it is recommended a gradual shift toward second best solutions for MSC pricing, to be achieved through a process of trials and errors with the aim to improve specific circumstances (rely congestion, reduce emissions etc.). The MSC pricing policies should remain totally in the public hand, all the revenues should be collected by the State and will flow into a “Transport Fund” to be used, among other scopes also to compensate for the private operators that are loosing money. In the long term Investment decisions should be dealt with by strategic transport plans, and at least for simple infrastructure PPP should be limited to the construction phase combined with recurrent bids for management, while complex PPP schemes should be limited to high-tech infrastructure.