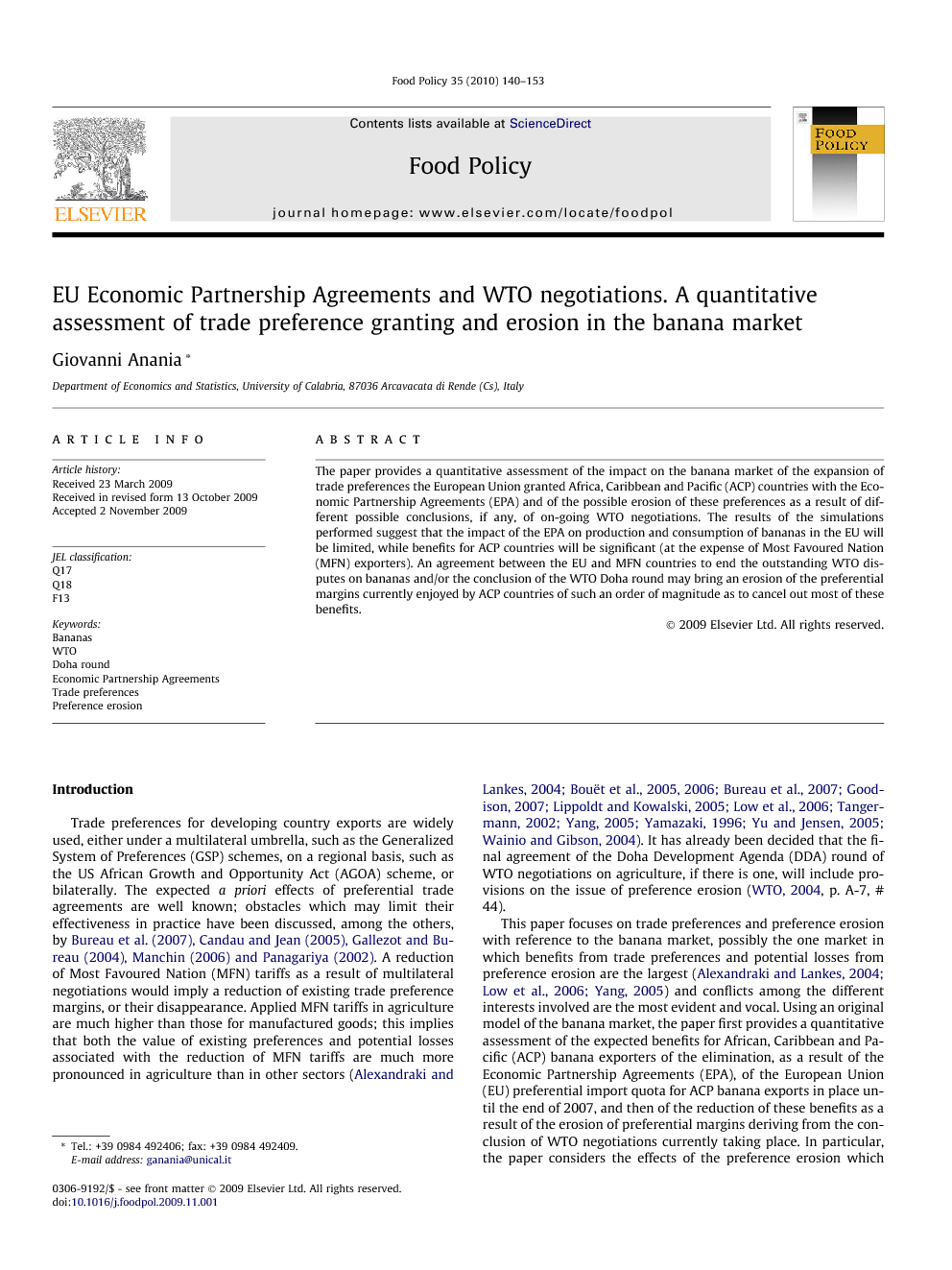 The paper provides a quantitative assessment of the impact on the banana market of the expansion of trade preferences the European Union granted Africa, Caribbean and Pacific (ACP) countries with the Economic Partnership Agreements (EPA) and of the possible erosion of these preferences as a result of different possible conclusions, if any, of on-going WTO negotiations. The results of the simulations performed suggest that the impact of the EPA on production and consumption of bananas in the EU will be limited, while benefits for ACP countries will be significant (at the expense of Most Favoured Nation (MFN) exporters). An agreement between the EU and MFN countries to end the outstanding WTO disputes on bananas and/or the conclusion of the WTO Doha round may bring an erosion of the preferential margins currently enjoyed by ACP countries of such an order of magnitude as to cancel out most of these benefits.

Trade preferences for developing country exports are widely used, either under a multilateral umbrella, such as the Generalized System of Preferences (GSP) schemes, on a regional basis, such as the US African Growth and Opportunity Act (AGOA) scheme, or bilaterally. The expected a priori effects of preferential trade agreements are well known; obstacles which may limit their effectiveness in practice have been discussed, among the others, by Bureau et al., 2007, Candau and Jean, 2005, Gallezot and Bureau, 2004, Manchin, 2006 and Panagariya, 2002. A reduction of Most Favoured Nation (MFN) tariffs as a result of multilateral negotiations would imply a reduction of existing trade preference margins, or their disappearance. Applied MFN tariffs in agriculture are much higher than those for manufactured goods; this implies that both the value of existing preferences and potential losses associated with the reduction of MFN tariffs are much more pronounced in agriculture than in other sectors ( Alexandraki and Lankes, 2004, Bouët et al., 2005, Bouët et al., 2006, Bureau et al., 2007, Goodison, 2007, Lippoldt and Kowalski, 2005, Low et al., 2006, Tangermann, 2002, Yang, 2005, Yamazaki, 1996, Yu and Jensen, 2005 and Wainio and Gibson, 2004). It has already been decided that the final agreement of the Doha Development Agenda (DDA) round of WTO negotiations on agriculture, if there is one, will include provisions on the issue of preference erosion (WTO, 2004, p. A-7, # 44). This paper focuses on trade preferences and preference erosion with reference to the banana market, possibly the one market in which benefits from trade preferences and potential losses from preference erosion are the largest (Alexandraki and Lankes, 2004, Low et al., 2006 and Yang, 2005) and conflicts among the different interests involved are the most evident and vocal. Using an original model of the banana market, the paper first provides a quantitative assessment of the expected benefits for African, Caribbean and Pacific (ACP) banana exporters of the elimination, as a result of the Economic Partnership Agreements (EPA), of the European Union (EU) preferential import quota for ACP banana exports in place until the end of 2007, and then of the reduction of these benefits as a result of the erosion of preferential margins deriving from the conclusion of WTO negotiations currently taking place. In particular, the paper considers the effects of the preference erosion which would derive from the lowering of the EU MFN tariff as a result either of the conclusion of the DDA round in accordance with the general consensus on agricultural market access reached in Geneva in July 2008 or, if the DDA round should not end, of the successful conclusion of the bilateral negotiations on bananas involving the EU, on one side, and several MFN exporters and the US, on the other. The results obtained suggest that the impact of the EPA on production and consumption of bananas in the EU will be limited, while benefits for ACP countries are definitely expected to be significant. However, the final agreement of the WTO DDA round (if any), or a conclusion of the negotiations between the EU and MFN exporters to put an end to the banana dispute, may bring an erosion of the preferential margins currently enjoyed by ACP countries of such an order of magnitude as, in the worse case, to wipe out most of these benefits.

The goal of this paper was twofold: to provide a quantitative assessment of the impact on the banana market (a) of the expansion in trade preferences the EU granted to ACP countries with the EPA and (b) of the erosion of these preferences implied by different possible endings, if any, of the DDA round or by the positive conclusion of bilateral negotiations between the EU, on one side, and MFN exporters and the US, on the other, to find a solution to the seemingly never ending WTO dispute on bananas. The results presented confirm the importance of the benefits the implementation of the EPA generates for ACP countries on the banana market, at the expense of MFN exporters. The simulations performed suggest the EPA will have only minor implications for the EU domestic market for bananas, while the impact on the composition of EU imports by origin will be significant. The MFN tariff would have to be reduced to 60 €/t, everything else held constant, to leave MFN exports unchanged with respect to the scenario in which the EPA are not implemented (while ACP exports would remain well above their level with no EPA). A successful conclusion of the DDA round could have a limited or a very significant impact on the erosion of the preferences the EU grants to ACP countries, depending on what is eventually agreed. At one extreme, if bananas are included among the tropical products and the EU bound tariff to be reduced is assumed to be 680 €/t, then preference erosion for ACP countries would be limited. At the other extreme, if a final agreement of the DDA round is reached and it calls for the elimination of all import restrictions for bananas, then most of the benefits to ACP countries from the EPA would vanish; ACP exports are now forecasted to be higher than in the no-EPA scenario only by 17%, rather than by 84% when the EPA are in place and no agreement whatsoever is reached at the WTO. If the tentative bilateral agreement reached in July 2008 in Geneva by the EU and MFN countries is implemented, it would imply the erosion of one third of the benefits resulting from the preferences granted by the EU to ACP countries with the EPA. While these conclusions appear robust to changes in a number of the assumptions made, they are relatively sensitive to the hypotheses on expected changes in yields. Because ACP exporters are less efficient in producing and marketing bananas than MFN ones, this suggests that aid targeted at improving efficiency in banana production in ACP and LDC countries may be as beneficial as granting them preferential market access, and that the negative effects of preference erosion can be offset by providing developing countries which are granted trade preferences with the financial and in-kind resources needed to improve the logistic infrastructures and technical efficiency of their banana industry. This result is consistent with ACP countries’ request for additional technical and financial aid from the EU aimed at improving the market competitiveness of their bananas as a condition for their acceptance of the tentative agreement reached by the EU and MFN exporters in Geneva in July 2008.