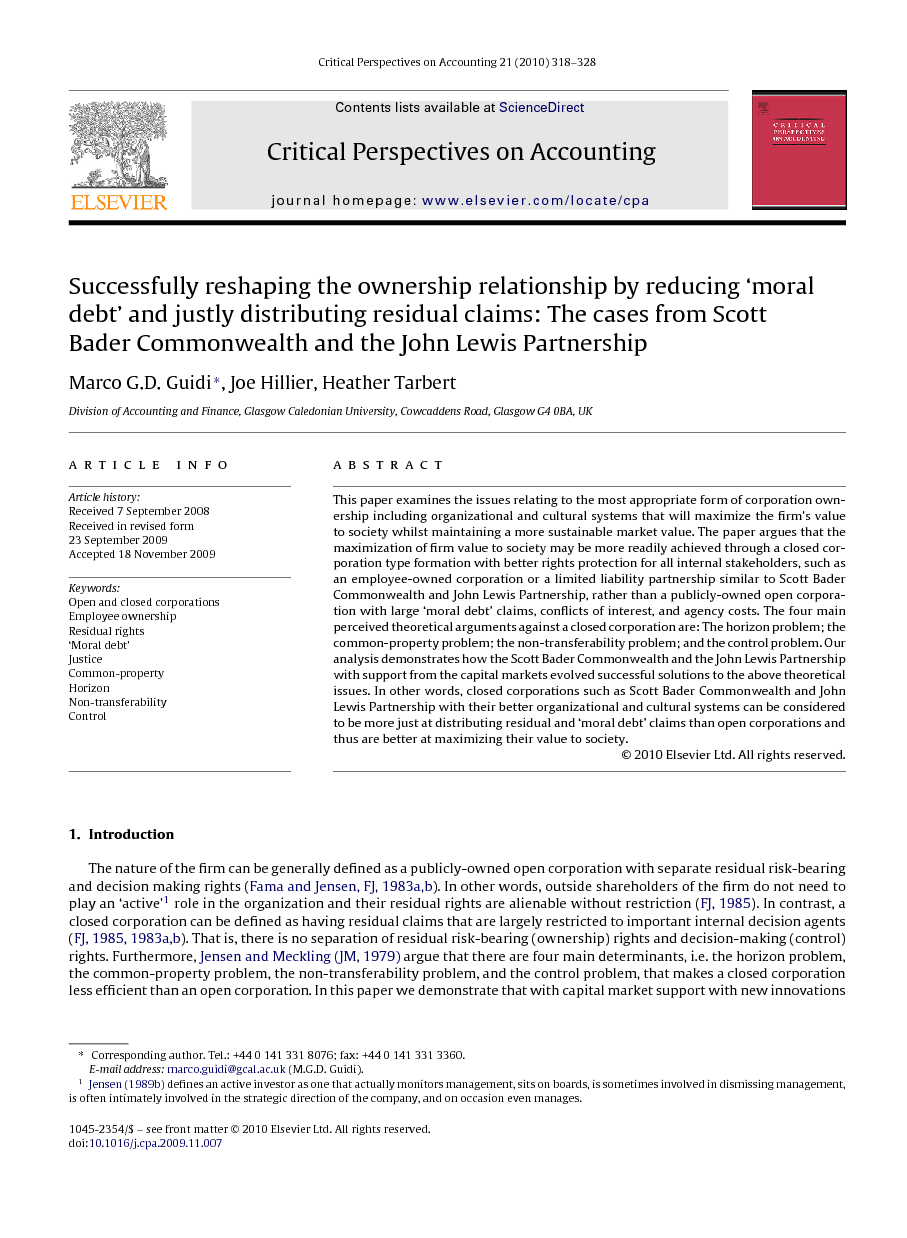 This paper examines the issues relating to the most appropriate form of corporation ownership including organizational and cultural systems that will maximize the firm's value to society whilst maintaining a more sustainable market value. The paper argues that the maximization of firm value to society may be more readily achieved through a closed corporation type formation with better rights protection for all internal stakeholders, such as an employee-owned corporation or a limited liability partnership similar to Scott Bader Commonwealth and John Lewis Partnership, rather than a publicly-owned open corporation with large ‘moral debt’ claims, conflicts of interest, and agency costs. The four main perceived theoretical arguments against a closed corporation are: The horizon problem; the common-property problem; the non-transferability problem; and the control problem. Our analysis demonstrates how the Scott Bader Commonwealth and the John Lewis Partnership with support from the capital markets evolved successful solutions to the above theoretical issues. In other words, closed corporations such as Scott Bader Commonwealth and John Lewis Partnership with their better organizational and cultural systems can be considered to be more just at distributing residual and ‘moral debt’ claims than open corporations and thus are better at maximizing their value to society.

The nature of the firm can be generally defined as a publicly-owned open corporation with separate residual risk-bearing and decision making rights (Fama and Jensen, 1983a and Fama and Jensen, 1983b). In other words, outside shareholders of the firm do not need to play an ‘active’1 role in the organization and their residual rights are alienable without restriction (FJ, 1985). In contrast, a closed corporation can be defined as having residual claims that are largely restricted to important internal decision agents (Fama and Jensen, 1985, Fama and Jensen, 1983a and Fama and Jensen, 1983b). That is, there is no separation of residual risk-bearing (ownership) rights and decision-making (control) rights. Furthermore, Jensen and Meckling (JM, 1979) argue that there are four main determinants, i.e. the horizon problem, the common-property problem, the non-transferability problem, and the control problem, that makes a closed corporation less efficient than an open corporation. In this paper we demonstrate that with capital market support with new innovations the closed corporation may be more efficient than the open corporation and through more ethical organizational structure2 and culture3 can more easily satisfy residual and ‘moral debt’4 claims. In more recent times, it is argued that increasing equity ownership for executives with appropriate incentives and corporate governance schemes ultimately increases shareholders’ wealth and the firm's performance through what represents a new organizational form (Jensen and Warner, 1988 and Jensen, 1986). However, the separation of ownership and control in open corporations also requires senior management to delegate decision rights to employees but “employees, however, are not owners: they cannot sell company property and keep the proceeds. Therefore, employees have fewer incentives to worry about the efficient use of company resources than do owners” (Brickley et al., 2002, p. 1825). Thus, there is an argument to allow all inside stakeholders to have equity ownership, which will help to justly distribute residual (financial) claims by reducing ‘moral debt’ and conflicts of interest, i.e. agency costs5, due to the common sharing of risk-bearing and decision-making rights. For instance, Core and Larcker (2002) find evidence that an increase in equity ownership for executives in conjunction with appropriate incentives and corporate governance schemes ultimately increases a firm's performance. Furthermore, Chaplinsky et al. (1998) U.S. evidence for the 1980's on LBO's (leveraged buy-outs) showed that there was no statistical difference in post buyout performance, i.e. long-term outcomes and employment growth, between MBO's (management buy-outs) and EBO (employee buy-outs). Employee ownership is a growing phenomenon in business, however, it is not yet well known or understood by the public, business communities, or the academic community (typically, textbooks either do not refer to such entities or provide a sentence or two). In the UK alone wholly employee-owned closed corporations6 account for around £20bn worth of turnover and one of the largest is John Lewis Partnership (JLP, employing around 65,000 people with a turnover of £5.1bn in 2006). The ultimate purpose of the John Lewis Partnership is defined in its constitution—“the happiness of all its members through their worthwhile and satisfying employment in a successful business” (John Lewis Partnership, 2006). In the US there is around 11,000 firms that have ESOPs and around “23 million Americans own stock in their employer, and perhaps 10 million own options” (Rosen et al., 2005, p. 9). Furthermore, from the late 1910s onwards Americans such as Kelso, Adler, Eliot (Harvard President), Brookings (Brooking Institute), John D. Rockefeller Jr., and Stanford (Stanford University) supported and advocated employee ownership (Rosen et al., 2005 and Blair et al., 2000). Rowlinson et al. (2006, p. 682) cite that Adam Smith and John Stuart Mill “opposed the separation of ownership from control and were highly critical of joint stock companies” (see also Arnold and De Lange, 2004 and Reiter, 1997). The remainder of this paper is organized as follows. In Section 2, we discuss the various issues facing both open and closed corporations in relation to residual (risk-bearing) and ‘moral debt’ claims. In Section 3, we discuss the main theoretical determinants against closed corporations as argued by JM (1979) and the real practical solutions that evolved to overcome these determinants against closed corporations. Section 4, concludes.

It is generally agreed in academic finance literature that the open corporation with its separate ownership (residual risk-bearing) and control (decision-making) rights survives because it delivers product and services demanded by consumers at the lowest price Fama and Jensen, 1983a and Fama and Jensen, 1983b. This point of view is becoming less acceptable to society and is evidenced by the disappearance of open corporations because they may have outlived their usefulness in many sectors, e.g. in the U.S. economy (Jensen, 2001, Jensen, 1989a, Jensen, 1989b and Jensen and Chew, 2003). It can be argued that closed corporations such as SBC and JLP will maximize their value to society more than open corporations has their written constitutions, organizational and cultural systems as well as flexible corporate form ensures that they have lower social and transaction costs. That is, SBC and JLP have substantial lower ‘moral debt’ and agency costs because they justly assign, protect, enforce and distribute residual and ‘moral debt’ claims to all insider stakeholders. Whereas, an open corporation by its nature has major ‘moral debt’ and agency costs in this regard (Guidi et al., 2008, Jensen, 2001, Jensen, 1989a, Jensen and Chew, 2003 and Jensen and Meckling, 1976). In other words, the lower ‘moral debt’ costs associated with SBC and JLP, is due to these corporations being more likely to justly assign, protect, enforce and distribute both alienable and inalienable rights as well as obligations in the form of residual and ‘moral debt’ claims to all insider stakeholders. Furthermore, the lower inherent internal conflict of interests in SBC and JLP is due to these corporations’ better organizational and cultural systems in dealing with common-sharing of risk bearing and of decision-making rights. Many open corporations endeavor to simulate employee-owned closed corporations so that they too can diminish their conflicts of interests and associated agency costs by providing equity ownership in the form of ESOPs or other similar schemes to inside stakeholders (Chang and Mayers, 1992, Rooney, 1991, Morck et al., 1988 and Demsetz and Lehn, 1985). However, to fully reduce the residual and ‘moral debt’ problems an open corporation would require to be fully employee-owned similar in constitution and corporate form to either SBC or JLP. In other words, an open corporation can only maximize its value to society when it becomes an employee-owned closed corporation with an internal control (decision-making) mechanism, i.e. organizational and cultural systems, that sets rules and incentives to assign, define, protect and distribute internal partners rights and obligations which facilitates internal decision makers to have goal congruence whilst rewarding them with a non-contributory pension scheme as well as year-end bonus, whilst flexible in corporate form when it is required. Finally, all corporations including closed corporations need external support from the capital markets, e.g. by allowing partners to access partial-employment insurance contracts to spread residual (financial) risk more efficiently. Under these circumstances, a closed corporation can deliver greater value to society through the minimization of ‘moral debt’ claims and just distribution of residual rights, i.e. through the just distribution of alienable and inalienable rights.