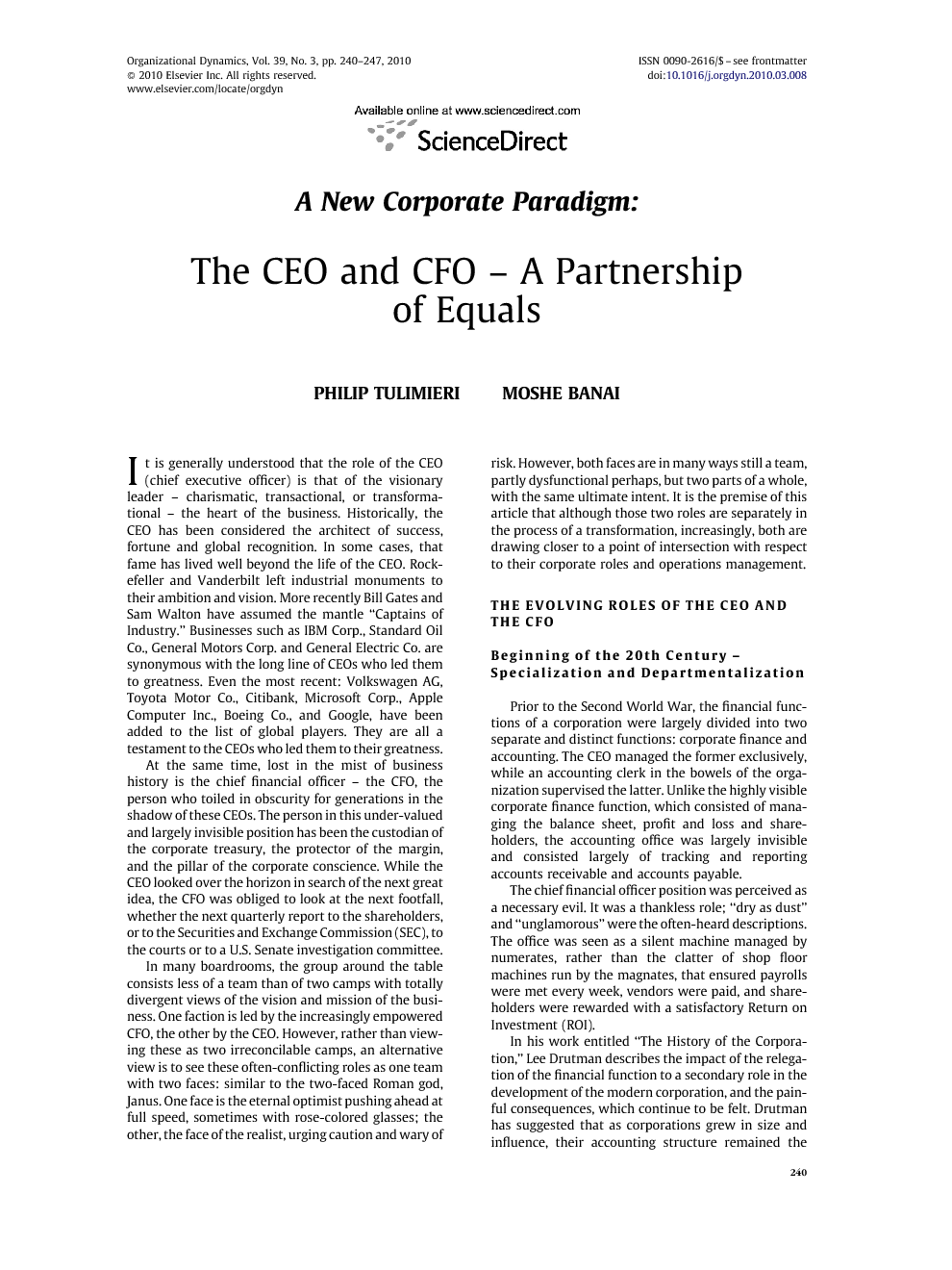 It is generally understood that the role of the CEO (chief executive officer) is that of the visionary leader – charismatic, transactional, or transformational – the heart of the business. Historically, the CEO has been considered the architect of success, fortune and global recognition. In some cases, that fame has lived well beyond the life of the CEO. Rockefeller and Vanderbilt left industrial monuments to their ambition and vision. More recently Bill Gates and Sam Walton have assumed the mantle “Captains of Industry.” Businesses such as IBM Corp., Standard Oil Co., General Motors Corp. and General Electric Co. are synonymous with the long line of CEOs who led them to greatness. Even the most recent: Volkswagen AG, Toyota Motor Co., Citibank, Microsoft Corp., Apple Computer Inc., Boeing Co., and Google, have been added to the list of global players. They are all a testament to the CEOs who led them to their greatness. At the same time, lost in the mist of business history is the chief financial officer – the CFO, the person who toiled in obscurity for generations in the shadow of these CEOs. The person in this under-valued and largely invisible position has been the custodian of the corporate treasury, the protector of the margin, and the pillar of the corporate conscience. While the CEO looked over the horizon in search of the next great idea, the CFO was obliged to look at the next footfall, whether the next quarterly report to the shareholders, or to the Securities and Exchange Commission (SEC), to the courts or to a U.S. Senate investigation committee. In many boardrooms, the group around the table consists less of a team than of two camps with totally divergent views of the vision and mission of the business. One faction is led by the increasingly empowered CFO, the other by the CEO. However, rather than viewing these as two irreconcilable camps, an alternative view is to see these often-conflicting roles as one team with two faces: similar to the two-faced Roman god, Janus. One face is the eternal optimist pushing ahead at full speed, sometimes with rose-colored glasses; the other, the face of the realist, urging caution and wary of risk. However, both faces are in many ways still a team, partly dysfunctional perhaps, but two parts of a whole, with the same ultimate intent. It is the premise of this article that although those two roles are separately in the process of a transformation, increasingly, both are drawing closer to a point of intersection with respect to their corporate roles and operations management.

Scandals earlier this decade have brought to light the inadequacy of the current management model, with one person – the CEO – as architect, judge and ultimate decision-maker. These abuses underscored the problem with the classic hierarchical form of management. The solution – if it can be called a “solution” – was the enactment of external controls by government on corporations. However, these controls do not go to the root of the issue: one person with entirely too much control and influence over decision-making and the careers of subordinates. The paradigm presented in this article – joint management of a corporation by the CEO–CFO – proposes a solution that acknowledges the reality of a society that is demanding a new and far-reaching approach to corporate management, as well as a new generation of young managers who are ready to adopt this approach. At the same time, this dynamic must be one that protects stakeholders, promotes the environment and continues to advance the competitive edge of a company by creating a climate of teaming, collaboration and creativity. Is the CEO–CFO paradigm workable in every business? The simple answer is no. However, as was observed earlier, there are examples of jointly managed companies by joint CEOs. This model brings together two entirely different skills and marries them into a unified, complementary whole. Admittedly, there is neither empirical nor anecdotal evidence to support the proposal. This essay is more an apologia for a test by a company willing to be a first mover in organization design and to make a profound change in how we view companies and their role in society. Rather than treating a company as a separate, atomized entity, companies are increasingly being seen as another form of a social networking, similar to a family unit or a tribe subject to more humanistic rules of behavior and organization. With that mindset, the rules of management expand geometrically. The format and processes for leading such groups admit of new and revolutionary forms. The CEO–CFO paradigm is just one of those, and it may be the beginning of more changes to come.