عنوان انگلیسی
Partnerships and governance: Struggle, cooperation, and the role of NGOs in welfare delivery for the homeless in Hong Kong
دانلود فوری مقاله + سفارش ترجمه 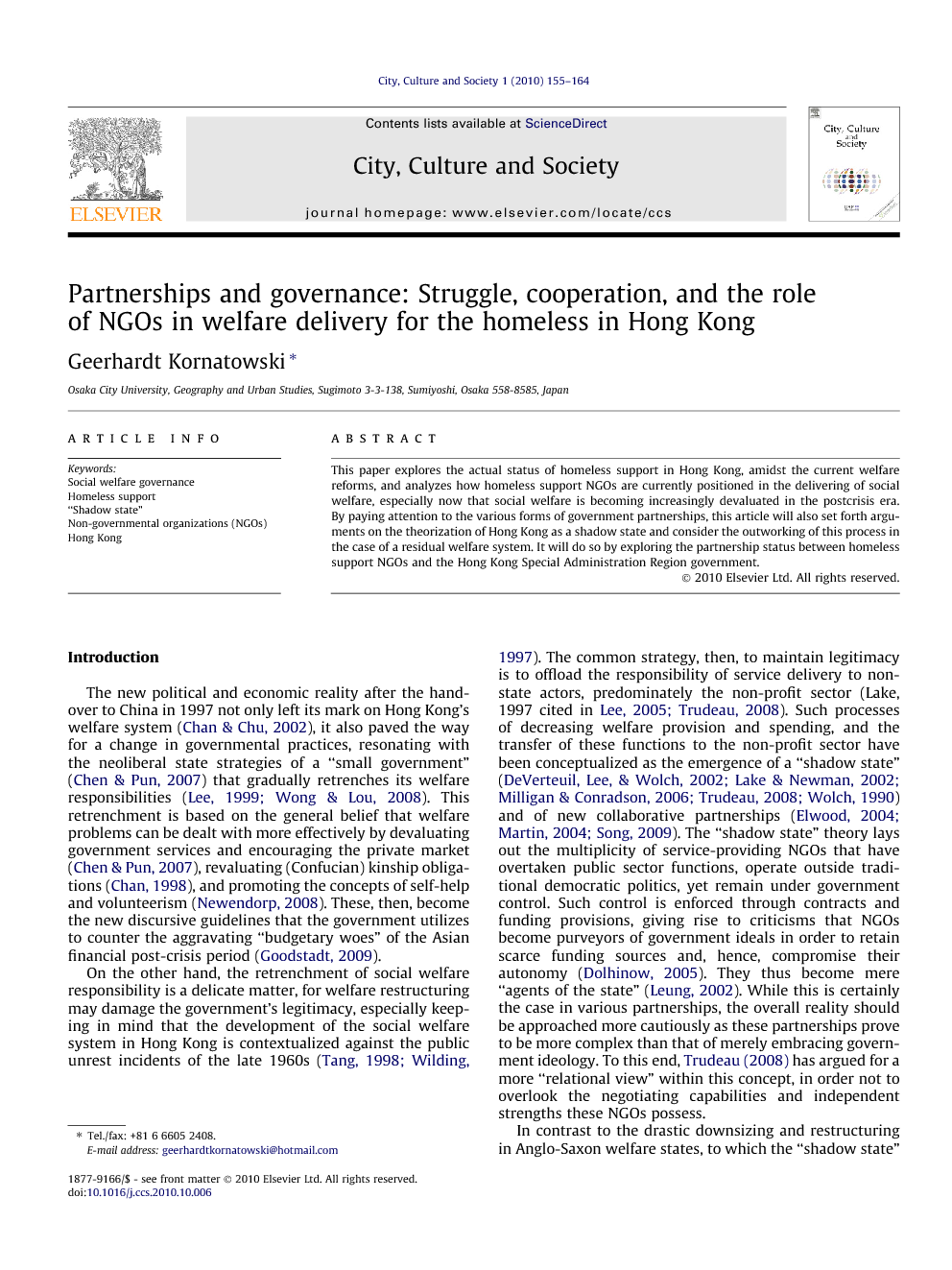 This paper explores the actual status of homeless support in Hong Kong, amidst the current welfare reforms, and analyzes how homeless support NGOs are currently positioned in the delivering of social welfare, especially now that social welfare is becoming increasingly devaluated in the postcrisis era. By paying attention to the various forms of government partnerships, this article will also set forth arguments on the theorization of Hong Kong as a shadow state and consider the outworking of this process in the case of a residual welfare system. It will do so by exploring the partnership status between homeless support NGOs and the Hong Kong Special Administration Region government.

The new political and economic reality after the handover to China in 1997 not only left its mark on Hong Kong’s welfare system (Chan & Chu, 2002), it also paved the way for a change in governmental practices, resonating with the neoliberal state strategies of a “small government” (Chen & Pun, 2007) that gradually retrenches its welfare responsibilities (Lee, 1999 and Wong and Lou, 2008). This retrenchment is based on the general belief that welfare problems can be dealt with more effectively by devaluating government services and encouraging the private market (Chen & Pun, 2007), revaluating (Confucian) kinship obligations (Chan, 1998), and promoting the concepts of self-help and volunteerism (Newendorp, 2008). These, then, become the new discursive guidelines that the government utilizes to counter the aggravating “budgetary woes” of the Asian financial post-crisis period (Goodstadt, 2009). On the other hand, the retrenchment of social welfare responsibility is a delicate matter, for welfare restructuring may damage the government’s legitimacy, especially keeping in mind that the development of the social welfare system in Hong Kong is contextualized against the public unrest incidents of the late 1960s (Tang, 1998 and Wilding, 1997). The common strategy, then, to maintain legitimacy is to offload the responsibility of service delivery to non-state actors, predominately the non-profit sector (Lake, 1997 cited in Lee, 2005 and Trudeau, 2008). Such processes of decreasing welfare provision and spending, and the transfer of these functions to the non-profit sector have been conceptualized as the emergence of a “shadow state” (DeVerteuil et al., 2002, Lake and Newman, 2002, Milligan and Conradson, 2006, Trudeau, 2008 and Wolch, 1990) and of new collaborative partnerships (Elwood, 2004, Martin, 2004 and Song, 2009). The “shadow state” theory lays out the multiplicity of service-providing NGOs that have overtaken public sector functions, operate outside traditional democratic politics, yet remain under government control. Such control is enforced through contracts and funding provisions, giving rise to criticisms that NGOs become purveyors of government ideals in order to retain scarce funding sources and, hence, compromise their autonomy (Dolhinow, 2005). They thus become mere “agents of the state” (Leung, 2002). While this is certainly the case in various partnerships, the overall reality should be approached more cautiously as these partnerships prove to be more complex than that of merely embracing government ideology. To this end, Trudeau (2008) has argued for a more “relational view” within this concept, in order not to overlook the negotiating capabilities and independent strengths these NGOs possess. In contrast to the drastic downsizing and restructuring in Anglo-Saxon welfare states, to which the “shadow state” concept has been generally applied, Hong Kong has been adopting a residual welfare policy ever since the creation of its social welfare system, which means that it has maintained a small social security budget and strongly sticks to the ideologies of self-reliance and family dependency. Nonetheless, and despite its relatively small budget, the Hong Kong Special Administrative Region government (HKSAR) has undertaken several efforts to save on social security expenditures, such as reducing benefits and introducing workfare. In line with these efforts, it has also delegated some of its previous responsibilities by means of outsourcing to NGOs (Chan, 2009). Against this background, the purpose of this paper is to explore the nature of NGO–government partnerships in Hong Kong and how these can be situated in the “shadow state” theory, now that the HKSAR’s residual social welfare system and expenditures have constantly been subjected to budget cuts. In order to do so, it will focus on how the delivery of welfare services for the homeless over time has been conceptualized and how the dynamic relationships between the government and related NGOs have influenced the actual landscape of homeless support. By doing so, it will seek to raise some arguments on how this interplay constitutes particular forms of social governance in the era of social welfare retrenchment.

The shadow state theory proposes that the government devolves its welfare functions as the prime provider of welfare but still governs by a polarization of service delivery contracted out to non-governmental agents. As this concept was developed in the Western context of states that previously possessed strong welfare systems (=Fordist-Keynesian era), such devolution during welfare retrenchment transitions and the concurring rise of civil society or a “pluralized social economy” (Milligan and Conradson, 2006, p. 1) have prompted wide research on the increasing importance of the voluntary sector. Furthermore, more attention is now being paid to the complexities that arise from government-NGO partnerships (Trudeau, 2008, p. 670). However, as outlined above, Hong Kong has been a residual welfare state ever since its social welfare system was implemented, and voluntary organizations have from the very start fulfilled an important role in the delivery field. Even the initiation of homeless support was almost completely due to the engagement of non-governmental agents, proving that they already were “active subjects who can shape and influence the exercise of government” (Taylor, 2007, p. 298). So does this mean that Hong Kong has been a “shadow state” from the very beginning? With the ethical welfare beliefs in Hong Kong based on family dependency (Lee, 2005 and Wilding, 1997), self-help (Newendorp, 2008), and self-reliance (Tsoi, 2002), it seems responsibility for social welfare delivery has always been avoided and deflected to other agencies. More importantly, the government has always maintained strong control over who qualifies for service and who does not. Indeed, the development of welfare in Hong Kong, in its broad sense, has taken place against the background of socio-political events, whether it is to enhance legitimacy in the colonial era (Lee, 2005, Smart, 2006 and Wilding, 1997) or to secure a stable economic environment (Chen & Pun, 2007). Whereas the homeless problem has been of relatively less concern within the broad welfare context, it did require effective governance, especially with international events such as the International Year of Shelter in 1987 and the negative effects of the Asian Financial Crisis and handover to China. Nevertheless, the complete contracting-out after the Three-year Action Plan and increased devolution of welfare responsibilities to NGOs do enhance the shadow state position taken on the by the HKSAR. Street sleepers not enrolled in the Street Sleepers Register do not qualify for homeless support, meaning the government still determines the beneficiaries, who are now being taken care of by the NGOs, increasingly in an “accountable way.” This “accountable way” has to facilitate the implementation of government welfare ideals by “enabling” (Tay, 2009) NGOs to conform to them in a most (cost-)effective way, which also ultimately leads to competition among NGOs that hinders collaborative efforts. This may, however, just suit the government as the status quo and structural welfare issues remain unchallenged.