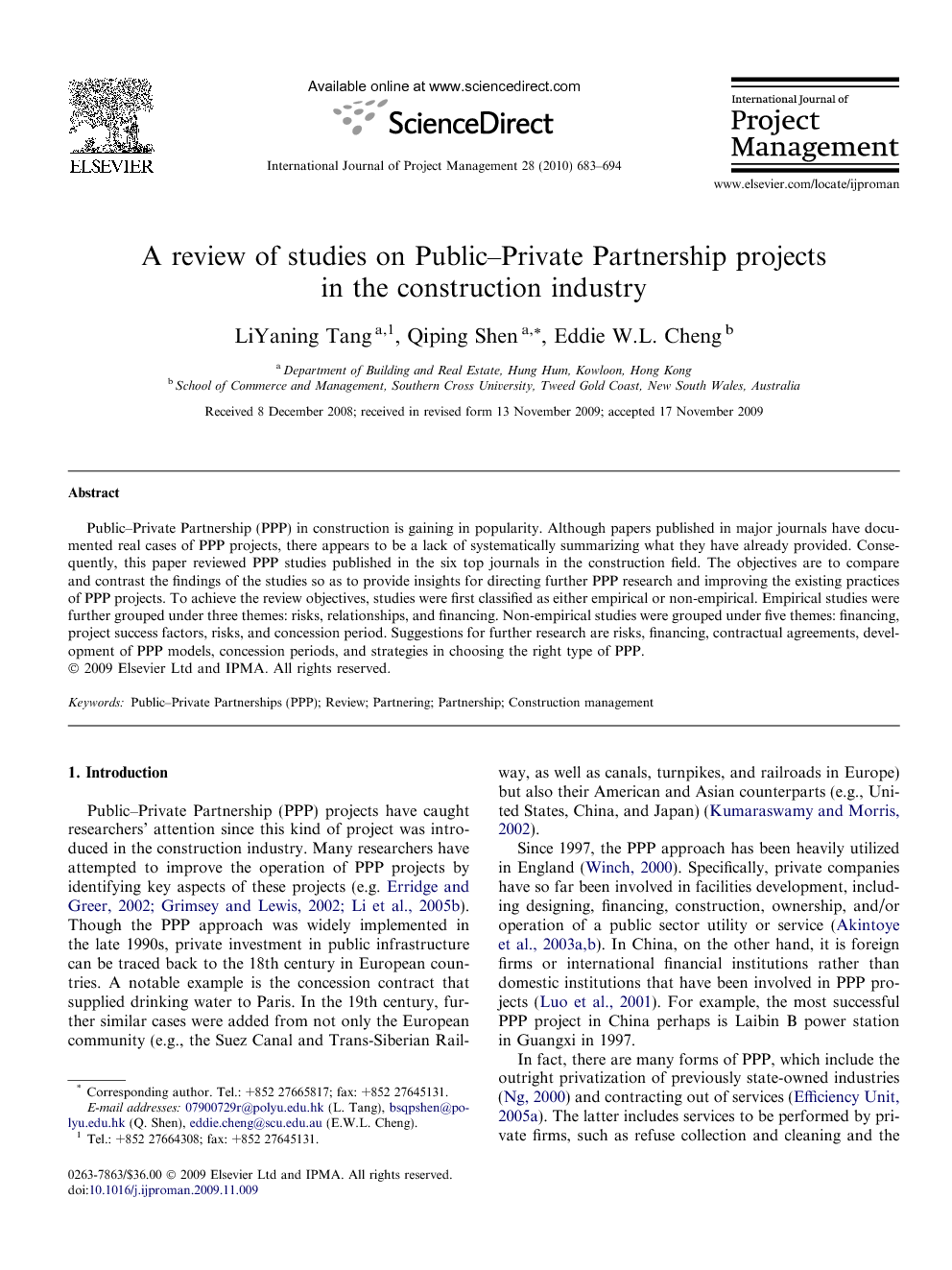 Public–Private Partnership (PPP) in construction is gaining in popularity. Although papers published in major journals have documented real cases of PPP projects, there appears to be a lack of systematically summarizing what they have already provided. Consequently, this paper reviewed PPP studies published in the six top journals in the construction field. The objectives are to compare and contrast the findings of the studies so as to provide insights for directing further PPP research and improving the existing practices of PPP projects. To achieve the review objectives, studies were first classified as either empirical or non-empirical. Empirical studies were further grouped under three themes: risks, relationships, and financing. Non-empirical studies were grouped under five themes: financing, project success factors, risks, and concession period. Suggestions for further research are risks, financing, contractual agreements, development of PPP models, concession periods, and strategies in choosing the right type of PPP.

Public–Private Partnership (PPP) projects have caught researchers’ attention since this kind of project was introduced in the construction industry. Many researchers have attempted to improve the operation of PPP projects by identifying key aspects of these projects (e.g. Erridge and Greer, 2002, Grimsey and Lewis, 2002 and Li et al., 2005b). Though the PPP approach was widely implemented in the late 1990s, private investment in public infrastructure can be traced back to the 18th century in European countries. A notable example is the concession contract that supplied drinking water to Paris. In the 19th century, further similar cases were added from not only the European community (e.g., the Suez Canal and Trans-Siberian Railway, as well as canals, turnpikes, and railroads in Europe) but also their American and Asian counterparts (e.g., United States, China, and Japan) (Kumaraswamy and Morris, 2002). Since 1997, the PPP approach has been heavily utilized in England (Winch, 2000). Specifically, private companies have so far been involved in facilities development, including designing, financing, construction, ownership, and/or operation of a public sector utility or service (Akintoye et al., 2003a and Akintoye et al., 2003b). In China, on the other hand, it is foreign firms or international financial institutions rather than domestic institutions that have been involved in PPP projects (Luo et al., 2001). For example, the most successful PPP project in China perhaps is Laibin B power station in Guangxi in 1997. In fact, there are many forms of PPP, which include the outright privatization of previously state-owned industries (Ng, 2000) and contracting out of services (Efficiency Unit, 2005a). The latter includes services to be performed by private firms, such as refuse collection and cleaning and the use of private finance in the provision of social infrastructure (Li and Akintoye, 2003, Sindane, 2000 and Tanninen-Ahonen, 2000). In addition to lessons learned from case studies (James et al., 2005), researchers have suggested the advantages of various aspects of PPPs, which include: • Enhanced partnership between the public sector and the private sector (e.g. Erridge and Greer, 2002, Ysa, 2007, Zhang and Kumaraswamy, 2001a, Zhang et al., 2002, Zhang, 2004a and Zhang, 2004b). • Better risk management (e.g. Grimsey and Lewis, 2002 and Li et al., 2005a; Shen et al., 2006). • Clearer government policies (e.g. Ball and Maginn, 2005 and Hart, 2003). • Revealed critical success factors (e.g. Li et al., 2005b). • Improved maturation of contract (e.g. Ho, 2006 and Tranfield et al., 2005). • More appropriate financial analysis (e.g. Akintoye et al., 2003a, Akintoye et al., 2003b, Norwood and Mansfield, 1999, Huang and Chou, 2006 and Saunders, 1998). Despite the fact that studies focused on PPP in construction have been increasing, to date there appears to be a lack of attention paid to the need for summarizing what has already been presented in the literature. In addition, a critical review of the existing literature may improve our understanding of the PPP’s advantages and disadvantages. As Li et al. (2000) suggested, “rather than arguing for a particular viewpoint, it would be more beneficial to investigate systematically what we do know and how we can proceed to learn more”. Therefore, a systematic review of relevant PPP studies is undertaken in this paper. In particular, two research objectives have been derived: (1) To compare and contrast the findings of the studies by use of a structure set for this paper. This structure is built up by empirical and non-empirical studies. (2) To provide insights for directing further PPP research. By conducting more research, the existing practices of PPPs can be improved. The paper starts with a description of the background of the PPP, including its definitions and various forms. The review methodology is then described, including a classification system made for categorizing the retrieved studies. The findings section presents the comparison of results, followed by the discussion section, in which suggestions for further investigation will be given. The final section concludes and summarizes the present research.

The review undertaken in this paper covers popular research topics in the PPP area. In empirical studies, three specific characteristics of PPP – risks, relationships, and financing – have been mainly studied. Research has been carried out on identifying risk categories, analyzing risk factors and formulating risk strategies. Factors affecting relationships between the public sector and the private sector have also been identified based on win–win situations. Financial sources and the way to achieve best value for money are important for the private sector. In non-empirical studies, research has been conducted on such aspects as financing, project success, risks, and concession periods. Models and simulation methods have been used to value factors for success in these four aspects. Moreover, insights have been provided to offer further research directions for PPP in construction. By conducting extra research, more effective ways can be developed to manage the relationship between the public sector and the private sector. In the past decade or so, great changes have happened in the construction industry because of PPP practices, especially to urban development and city building. It is expected that changes will continue to evolve in the future when more research has been undertaken and new findings have been reported.