عنوان انگلیسی
Buyer–supplier partnerships during product design and development in the global automotive sector: Who invests, in what and when?
دانلود فوری مقاله + سفارش ترجمه 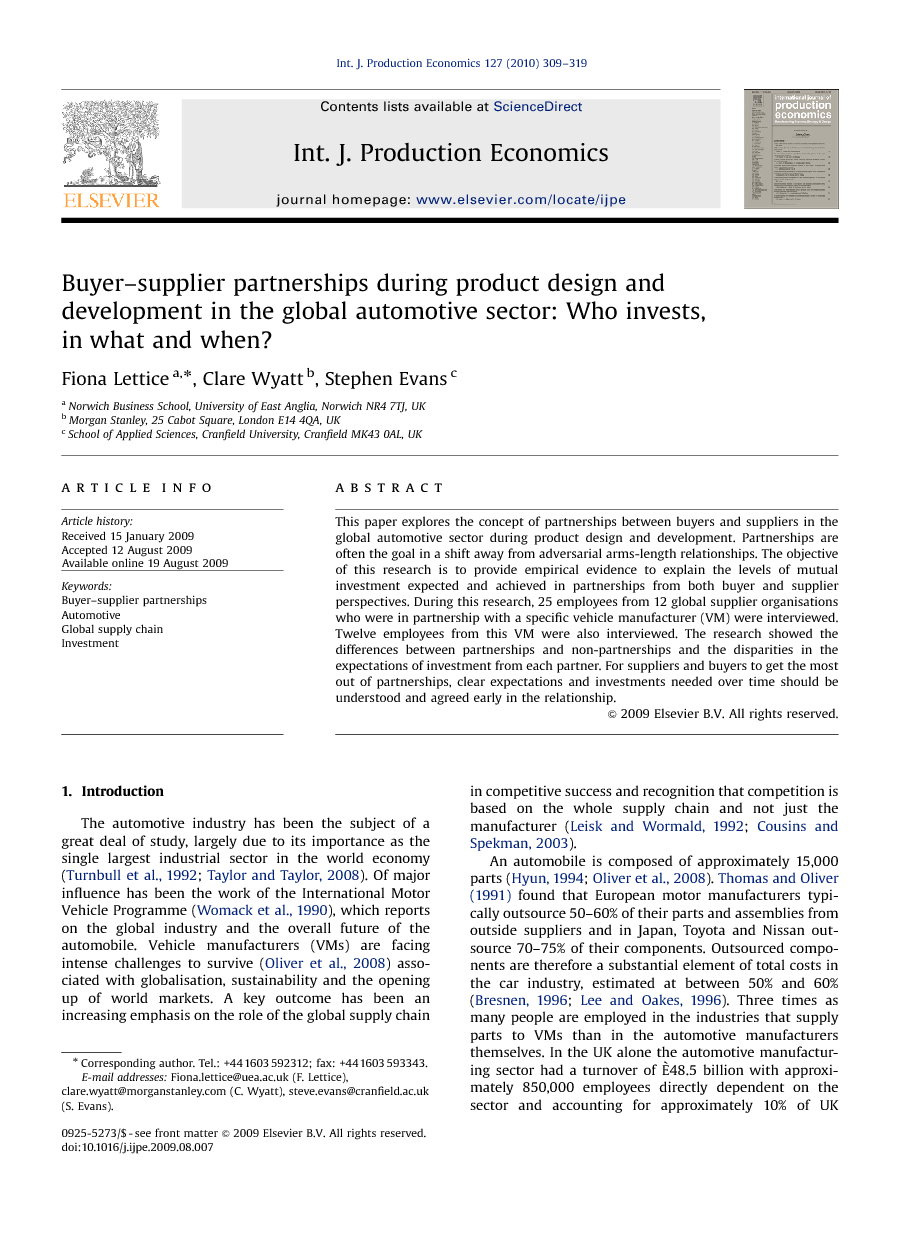 This paper explores the concept of partnerships between buyers and suppliers in the global automotive sector during product design and development. Partnerships are often the goal in a shift away from adversarial arms-length relationships. The objective of this research is to provide empirical evidence to explain the levels of mutual investment expected and achieved in partnerships from both buyer and supplier perspectives. During this research, 25 employees from 12 global supplier organisations who were in partnership with a specific vehicle manufacturer (VM) were interviewed. Twelve employees from this VM were also interviewed. The research showed the differences between partnerships and non-partnerships and the disparities in the expectations of investment from each partner. For suppliers and buyers to get the most out of partnerships, clear expectations and investments needed over time should be understood and agreed early in the relationship.

Many organisations embrace partnership as a philosophy and view it as a key strategy for continued competitive success. Studies have viewed partnership as an economic concept, designed to manage ongoing transactions within the framework of a relationship. We found it important to consider the behavioural aspects of the relationship and also to take a temporal perspective of the partnership. We found that for partnerships to be successful, clear and ongoing expectations need to be formed and communicated. At the outset of the partnership, both VM and supplier need to understand that the investment will be high. For the VM, this investment will be predominantly resource and time to help the supplier improve and align their processes and culture with the VM's processes and culture. For the supplier, this will be in terms of resource and time, but they will also potentially need to invest in new equipment, processes and techniques to achieve the level of improvement and alignment required and to effectively mirror the VM. After the initial formation of the partnership, VMs need to consider how to maintain an equitable partnership with their better suppliers over time, to prevent feelings of frustration and dissatisfaction from the suppliers due to the imbalance of investment over time. Although the VM may decrease its investment over time, some investment in communication, knowledge exchange and trust building is still required to ensure a successful partnership. At the same time, the suppliers need to become more proactive and selective in their interactions with the VM and gradually decrease their dependence on such regular contact as was necessary at the beginning of the partnership. By understanding the dynamics of the partnership over time, both parties can have more realistic expectations of each other. With a relatively small increase in ongoing investment, through increased communication and information flows, the VM can reduce supplier frustration and reduce the rate of fall in investment as perceived by the suppliers. Also, if suppliers consider their dependence on the VM and find ways to gradually reduce this over time, the expectation gap should close. Although the literature emphasises mutual investment as a key element in partnership, it does not identify the imbalance in perceived and desired investment over time. A key contribution of this research is to consider the time aspect. This research is limited in generalisability, as it is based on a single VM's partnership with 12 of its global suppliers and the findings about changes in investment in partnerships over time need to be validated with a comparison of different industrial sectors. The exploratory nature of the study has also given rise to new questions and identified areas for further research. Future research should consider how buyer–supplier partnerships are maintained over time and where partnerships have been successful, how the expectations have been managed over time to avoid the expectation gap identified in our study, which left unchecked could potentially lead to the failure of a partnership.