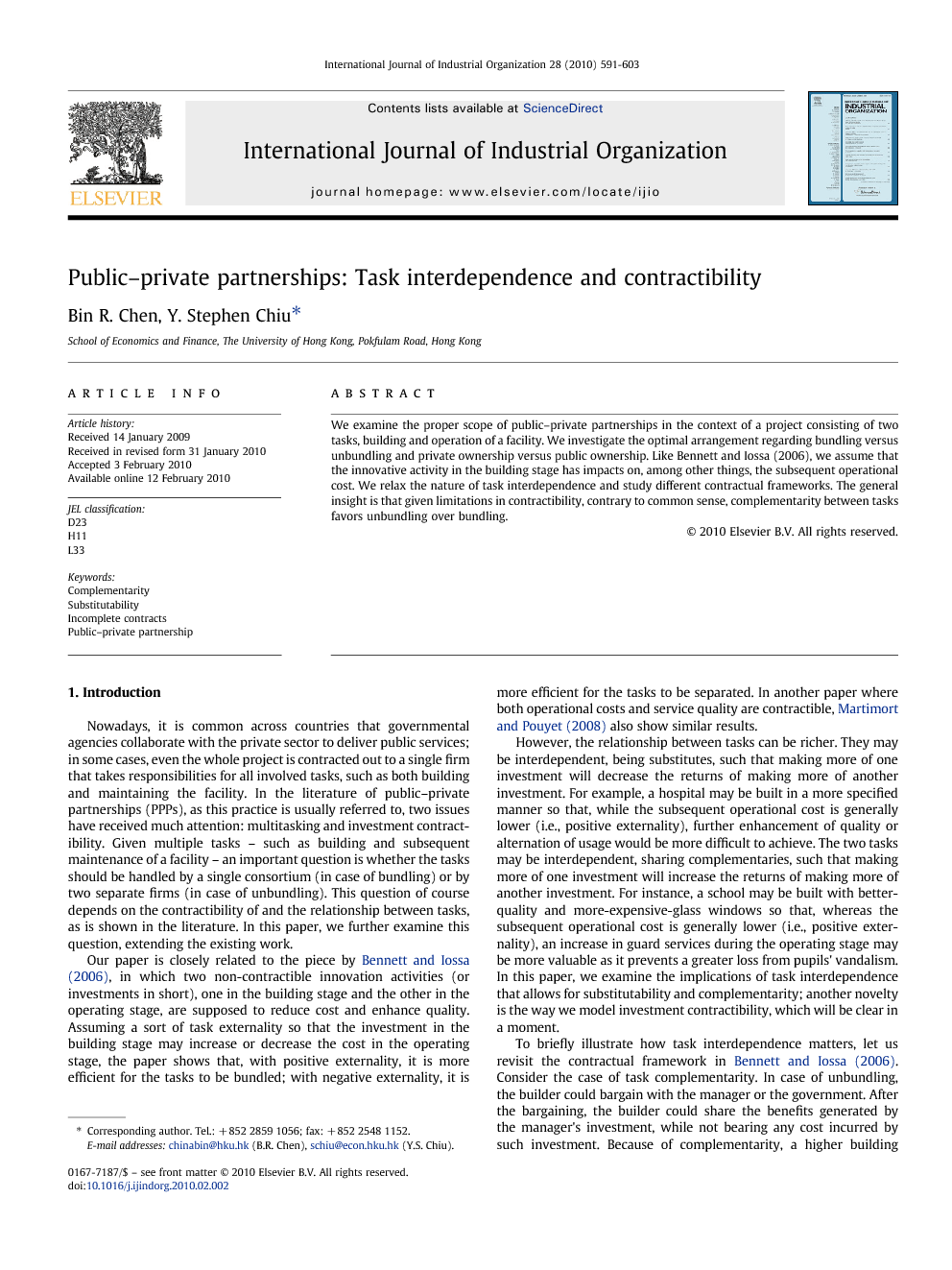 We examine the proper scope of public–private partnerships in the context of a project consisting of two tasks, building and operation of a facility. We investigate the optimal arrangement regarding bundling versus unbundling and private ownership versus public ownership. Like Bennett and Iossa (2006), we assume that the innovative activity in the building stage has impacts on, among other things, the subsequent operational cost. We relax the nature of task interdependence and study different contractual frameworks. The general insight is that given limitations in contractibility, contrary to common sense, complementarity between tasks favors unbundling over bundlin

This paper has reexamined the proper scope of public–private partnerships in the context of a project consisting of two tasks, such as construction and operation of a facility. The focus of analysis has been the role of task or investment interdependence, i.e., the two investments are either complements or substitutes. Whether the operation investment is non-contractible or interim contractible, we have found that investment interdependence is a determinant of the optimal PPPs. In particular, favored by the cost-reduction effect of the building investment, integration is nonetheless disfavored by investment complementarity. While the focus of this paper is on the interim contractibility framework, in which the second, operation task is contractible subsequent to the building stage, we have also argued that weaker but similar insights hold true in the incomplete contracting framework in the fashion of Bennett and Iossa (2006). These findings regarding the role of task interdependence, while counter-intuitive, contribute to the understanding of one empirical puzzle raised in the literature. In a framework of investment externality but not investment interdependence, unbundled projects are rationalized by negative externality. Despite a theoretical possibility, examples of negative externality are relatively rare (see Iossa and Martimort, 2008). However, in our framework where investment interdependence is also allowed, unbundled projects can now be rationalized by weak positive externality together with strong complementarity. Our theory thus provides an alternative explanation to the phenomena. For example, the undesirable performance of PFI schools can be due to the fact that a better fitness might give rise to a higher value of guide service. In other cases involving high technology, such as IT projects, because more advanced and innovative system usually comes up with higher degree of complexity, more effort is required for the operator in learning how to handle it efficiently. The complementarity between building and operating thus weakens the advantage of bundling these tasks. On the other hand, in such sectors as prison, waste disposal, transport and hospital, sequential investments of building and operating might exhibit certain level of substitutability. According to a report by National Audit Office (2003) in the United Kingdom, compared to traditional procurement, PFI prisons tend to improve performance and save costs. The reason is that innovative design solutions help reduce the level of staffing needed to ensure security in prison. The underlying reason may be the substitutability between building and operating, as much as the positive externality. In the waste disposal sector, a very well designed garbage-categorizing system may conceivably lessen the burden of garbage collectors and cleaners. According to our theory, bundling the tasks of designing and operating is favored in this case. In the transport sector, if an electronic eye system located in proper places along each highway is of very good quality, detection of speedsters may not demand much effort from the police or other rosters. Similarly, these tasks are better contracted out in a bundle. Because construction and management of many public projects often demonstrate interdependence, our model provides a greater latitude to understand and interpret real world phenomena. We end with some comments on the role of the contracting framework. If project quality and cost are available for contracting upon but the agents are risk averse, the conventional insight that task complementarity favors bundling holds true. On the other hand, if agency problem stems from limited liability, or if the contract is incomplete to a certain degree (non-contractible or interim contractible) and ex post bargaining is unavoidable, it is possible that task complementarity favors unbundling. The lesson is that when delegating public project to private sectors, the government should condition her decisions on the features of contracting environment and agency problem.