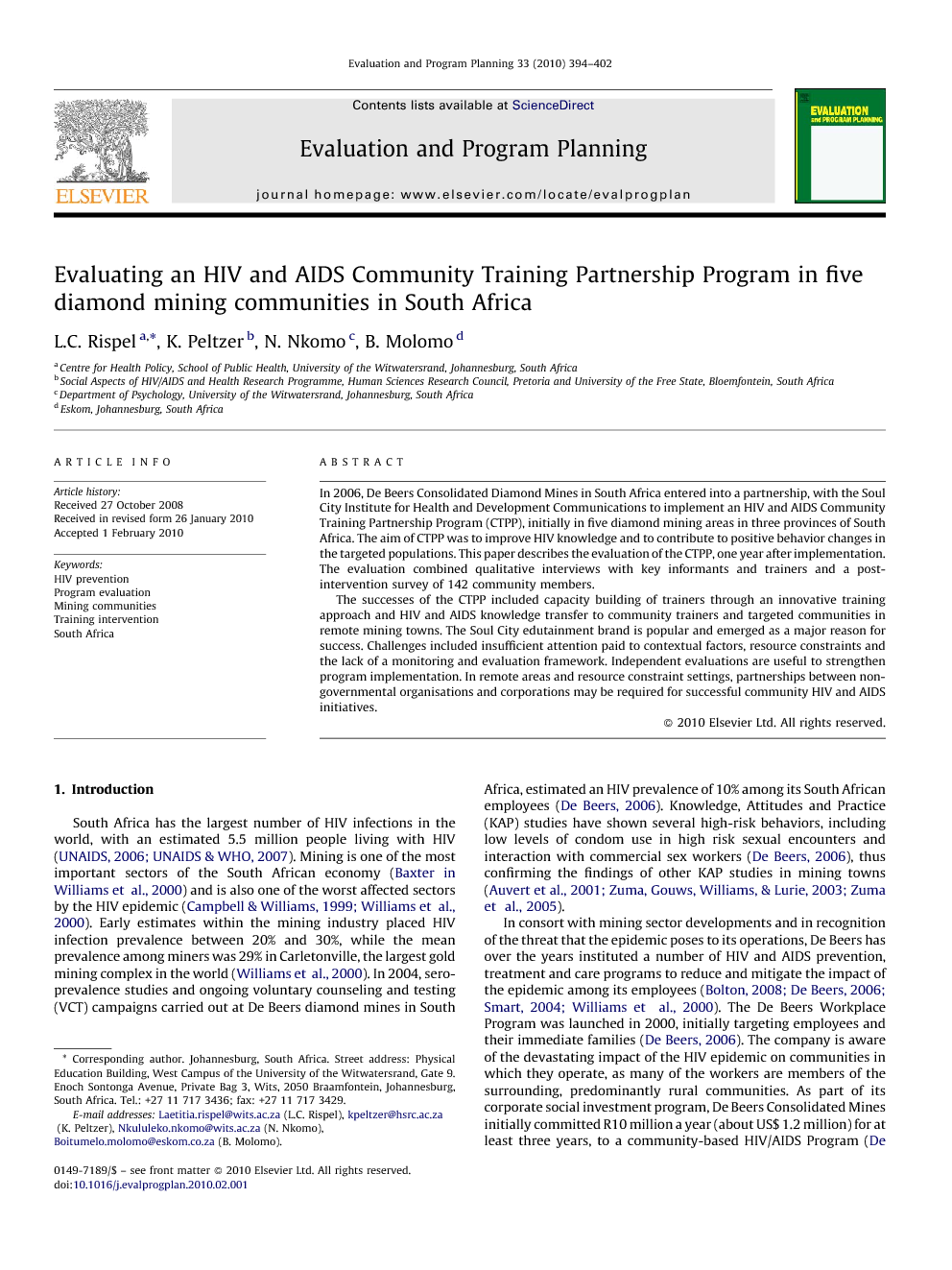 In 2006, De Beers Consolidated Diamond Mines in South Africa entered into a partnership, with the Soul City Institute for Health and Development Communications to implement an HIV and AIDS Community Training Partnership Program (CTPP), initially in five diamond mining areas in three provinces of South Africa. The aim of CTPP was to improve HIV knowledge and to contribute to positive behavior changes in the targeted populations. This paper describes the evaluation of the CTPP, one year after implementation. The evaluation combined qualitative interviews with key informants and trainers and a post-intervention survey of 142 community members. The successes of the CTPP included capacity building of trainers through an innovative training approach and HIV and AIDS knowledge transfer to community trainers and targeted communities in remote mining towns. The Soul City edutainment brand is popular and emerged as a major reason for success. Challenges included insufficient attention paid to contextual factors, resource constraints and the lack of a monitoring and evaluation framework. Independent evaluations are useful to strengthen program implementation. In remote areas and resource constraint settings, partnerships between non-governmental organisations and corporations may be required for successful community HIV and AIDS initiatives.

South Africa has the largest number of HIV infections in the world, with an estimated 5.5 million people living with HIV (UNAIDS, 2006 and UNAIDS and WHO, 2007). Mining is one of the most important sectors of the South African economy (Baxter in Williams et al., 2000) and is also one of the worst affected sectors by the HIV epidemic (Campbell and Williams, 1999 and Williams et al., 2000). Early estimates within the mining industry placed HIV infection prevalence between 20% and 30%, while the mean prevalence among miners was 29% in Carletonville, the largest gold mining complex in the world (Williams et al., 2000). In 2004, sero-prevalence studies and ongoing voluntary counseling and testing (VCT) campaigns carried out at De Beers diamond mines in South Africa, estimated an HIV prevalence of 10% among its South African employees (De Beers, 2006). Knowledge, Attitudes and Practice (KAP) studies have shown several high-risk behaviors, including low levels of condom use in high risk sexual encounters and interaction with commercial sex workers (De Beers, 2006), thus confirming the findings of other KAP studies in mining towns (Auvert et al., 2001, Zuma et al., 2003 and Zuma et al., 2005). In consort with mining sector developments and in recognition of the threat that the epidemic poses to its operations, De Beers has over the years instituted a number of HIV and AIDS prevention, treatment and care programs to reduce and mitigate the impact of the epidemic among its employees (Bolton, 2008, De Beers, 2006, Smart, 2004 and Williams et al., 2000). The De Beers Workplace Program was launched in 2000, initially targeting employees and their immediate families (De Beers, 2006). The company is aware of the devastating impact of the HIV epidemic on communities in which they operate, as many of the workers are members of the surrounding, predominantly rural communities. As part of its corporate social investment program, De Beers Consolidated Mines initially committed R10 million a year (about US$ 1.2 million) for at least three years, to a community-based HIV/AIDS Program (De Beers & Soul City, no date). The intention of the De Beers Community HIV/AIDS Program is, where possible, to extend what has already been implemented in the workplace into the communities, to facilitate the implementation of new programs, and to support the efforts of Government (De Beers, 2006). De Beers intends to build a comprehensive HIV and AIDS Community Program which focuses on the key areas of prevention, education and training while facilitating and supporting treatment, care and support for those infected and affected. The first major partnership announced as part of the De Beers Community HIV/AIDS Program was with the Soul City Institute for Health and Development Communications (IHDC) (Soul City, 2007). Soul City is a multi-media ‘edutainment’ and development communication program in operation since 1992 (Soul City, 2007). The Program combines radio, television, newspapers and magazines to impart messages and to advocate on healthy public policy. Evaluations done since the inception of Soul City IHDC have shown repeatedly that Soul City has had a positive impact on health literacy and that it contributes positively in the fight against HIV and AIDS (Goldstein et al., 2004, Goldstein et al., 2005 and Scheepers et al., 2004). This paper describes the evaluation of the Soul City/De Beers HIV and AIDS Community Training Partnership Program (CTPP) implemented in five diamond mining communities in three provinces of South Africa. The objectives of the evaluation were to determine: the main activities of the community trainers (peer educators) and the barriers and facilitators to their actions; impact of the training program on the community trainers; and impact that the training has had (if any) on the surrounding mining communities. In the first part of the paper, we describe the Soul City CTPP intervention, the cascade model used for training and the characteristics of the study population. In the second section of the paper, we briefly describe the evaluation approach and methods. This is followed by the presentation of the key results of the evaluation, including the factors influencing the implementation of the CTPP. The concluding section discusses the evaluation findings and contains the key lessons learnt.

The evaluation of the CTPP was conducted by an external independent team, and assisted with the documentation of the CTPP and its implementation in the five diamond mining areas in South Africa. The evaluation has also been useful to assess some of the reported CTPP successes, constraints and the complexities of implementation in remote diamond mining areas. The reported successes included value added to existing HIV and AIDS initiatives; facilitation of new initiatives; introducing an innovative training approach; empowerment and capacity building of trainers; strengthening relationships between mines and communities and assisting people to confront issues of personal significance. The CTPP has also facilitated the penetration of the well-known Soul City mass media communications approach in remote, rural towns. Although evaluations of the effectiveness of mass media interventions on changing HIV-related knowledge, attitudes and behaviors in developing countries have yielded mixed results (Bertrand, O’Reilly, Denison, Anhang, & Sweat, 2006), multi- and mass media campaigns have the potential to impact positively on knowledge and attitudes, and to promote safer sexual behavior (Liskin, 1990, Myhre and Flora, 2000, Oakley et al., 1995 and Peltzer and Seoka, 2004). This was found in the CTPP evaluation, where community members reported improved knowledge, but with limited positive behavior changes. There was a relatively high proportion of participants who reported having multiple sexual partners (27%) and lack of condom use with non-regular sex partners (23%). Reported HIV risk behavior among participants appears to be higher when compared with the findings of the 2005 national population-based survey, where only 16% reported two and more sexual partners in the past 12 months (Shisana et al., 2005). However, reported condom use at last sex (63%) was higher than that found in the 2005 national population-based survey where 38% reported condom at last sex (Shisana et al., 2005). Changing community norms regarding multiple and concurrent partnerships remains one of the key research questions (Wilson & Halperin, 2008). Furthermore radical behavioral changes require a multi-level approach that encompasses HIV prevention and treatment, biomedical interventions and addressing structural determinants of the epidemic (Coates, Richter, & Caceres, 2008). Although the CTPP was envisaged as a community-level intervention in order to promote change in norms and HIV risk, many components of a successful community popular opinion leadership (CPOL) approach were not in place (Kelly, 2004). The CTPP could have benefited from a detailed situation analysis and formative research that guided its development and took account of the contextual factors in the mining towns, rather than been seen simply as an extension of De Beers Workplace Program, albeit combined with the popular Soul City brand and the use of existing training materials. Issues that need to be resolved for future program implementation include sustainability and how the CTPP could facilitate or deal with the need for structural changes in the mining towns; dedicated financial resources for the community trainer component; retention of community trainers, including the possible payment of an incentive; and funding of other logistical issues (e.g. transport). The lack of a standardized, clear, yet user-friendly monitoring and evaluation framework for the CTPP was absent and needs to be developed to enable measurement of inputs, outputs, process and outcomes and to allow for comparisons across the mining areas.