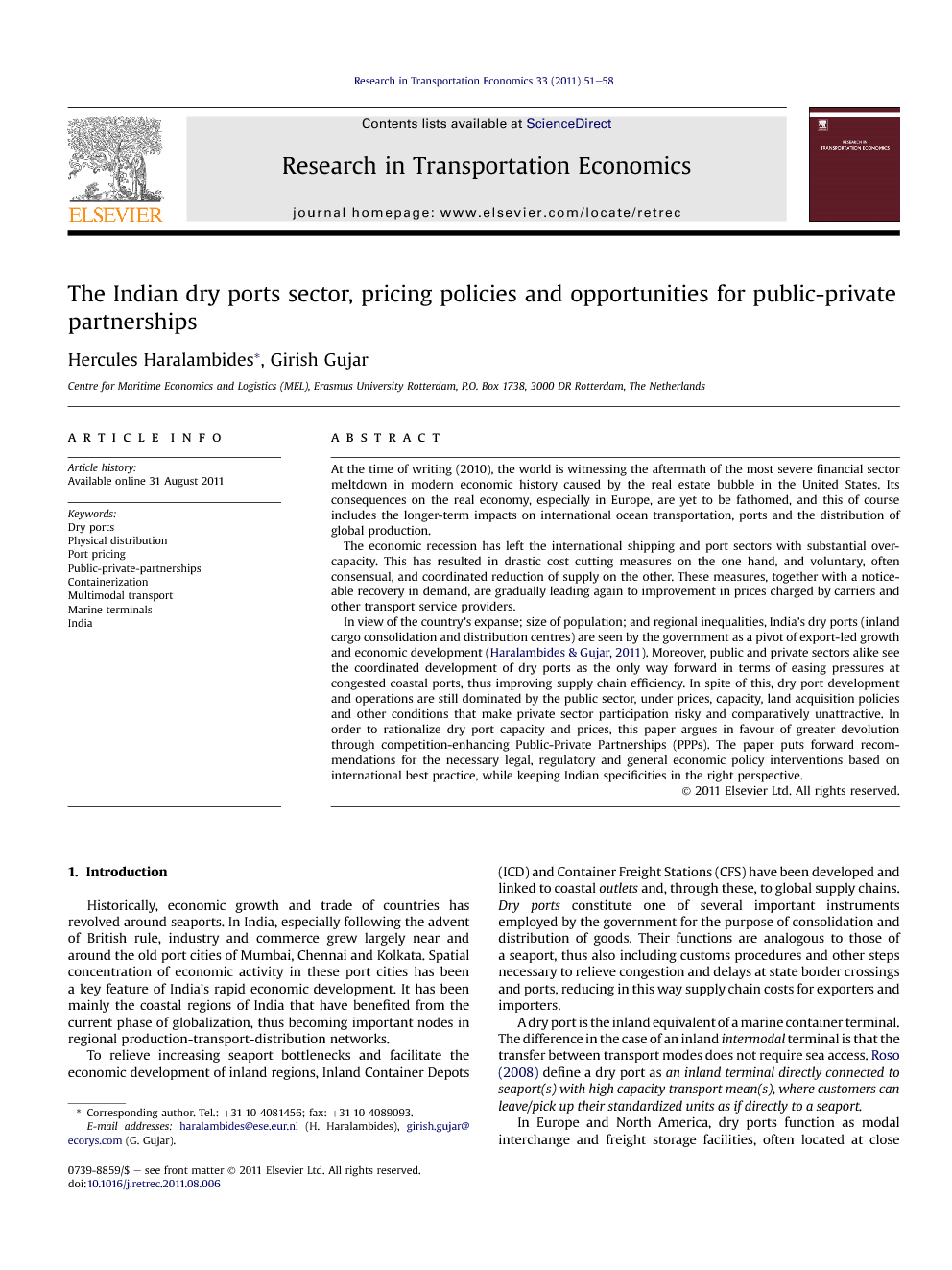 At the time of writing (2010), the world is witnessing the aftermath of the most severe financial sector meltdown in modern economic history caused by the real estate bubble in the United States. Its consequences on the real economy, especially in Europe, are yet to be fathomed, and this of course includes the longer-term impacts on international ocean transportation, ports and the distribution of global production. The economic recession has left the international shipping and port sectors with substantial overcapacity. This has resulted in drastic cost cutting measures on the one hand, and voluntary, often consensual, and coordinated reduction of supply on the other. These measures, together with a noticeable recovery in demand, are gradually leading again to improvement in prices charged by carriers and other transport service providers. In view of the country’s expanse; size of population; and regional inequalities, India’s dry ports (inland cargo consolidation and distribution centres) are seen by the government as a pivot of export-led growth and economic development (Haralambides & Gujar, 2011). Moreover, public and private sectors alike see the coordinated development of dry ports as the only way forward in terms of easing pressures at congested coastal ports, thus improving supply chain efficiency. In spite of this, dry port development and operations are still dominated by the public sector, under prices, capacity, land acquisition policies and other conditions that make private sector participation risky and comparatively unattractive. In order to rationalize dry port capacity and prices, this paper argues in favour of greater devolution through competition-enhancing Public-Private Partnerships (PPPs). The paper puts forward recommendations for the necessary legal, regulatory and general economic policy interventions based on international best practice, while keeping Indian specificities in the right perspective.

Historically, economic growth and trade of countries has revolved around seaports. In India, especially following the advent of British rule, industry and commerce grew largely near and around the old port cities of Mumbai, Chennai and Kolkata. Spatial concentration of economic activity in these port cities has been a key feature of India’s rapid economic development. It has been mainly the coastal regions of India that have benefited from the current phase of globalization, thus becoming important nodes in regional production-transport-distribution networks. To relieve increasing seaport bottlenecks and facilitate the economic development of inland regions, Inland Container Depots (ICD) and Container Freight Stations (CFS) have been developed and linked to coastal outlets and, through these, to global supply chains. Dry ports constitute one of several important instruments employed by the government for the purpose of consolidation and distribution of goods. Their functions are analogous to those of a seaport, thus also including customs procedures and other steps necessary to relieve congestion and delays at state border crossings and ports, reducing in this way supply chain costs for exporters and importers. A dry port is the inland equivalent of a marine container terminal. The difference in the case of an inland intermodal terminal is that the transfer between transport modes does not require sea access. Roso (2008) define a dry port as an inland terminal directly connected to seaport(s) with high capacity transport mean(s), where customers can leave/pick up their standardized units as if directly to a seaport. In Europe and North America, dry ports function as modal interchange and freight storage facilities, often located at close proximity to strategic rail and road hubs. They are termed differently in different countries, e.g. Strategic Rail Freight Interchanges in the United Kingdom; Freight Villages in some countries of Western Europe; and Inland Ports or Multimodal Transport and Distribution Hubs in the United States. The European freight villages were established in 1991, when the national freight village associations of France, Italy and Spain joined forces to form a Europe-wide association. Euro Platform currently represents 60 freight villages in 10 European countries (Denmark, France, Germany, Greece, Hungary, Italy, Luxembourg, Portugal, Spain and Ukraine), serving 2400 transport operators. A recent assessment of the European freight village concept (UNESCAP, 2006) discusses its essential functional characteristics as follows: ‘The main societal benefit claimed for European freight villages is that they have reduced urban traffic congestion by moving warehousing, distribution and some processing activities outside the cities, to locations that make maximum use of more cost-effective transport modes, such as rail. Best practice examples of freight villages operating at inland locations and involving a high degree of modal integration are to be found in the Bologna Freight Village, or Interporto Bologna (Italy), and at the Cargo Centre Graz, a strategic multimodal facility located in Graz, Austria. The wider economic benefits and multiplier effects of inland freight modal interchange facilities are eloquently presented in UNCTAD’s enterprise cluster concept. A well thought out application of this concept to India, in view of the country’s size and degree of economic development, could render user benefits much more profound and measurable than those of Europe’s freight villages and logistics parks.’ Dry ports can potentially nurture manufacturing and service clusters, for example, special economic- and export processing zones. Increasingly, dry ports are located close to existing or potential production or consumption centres. If properly planned, the number of dry ports should depend on geography, as well as on diversity and extent of economic activity. Indicatively, UNESCAP (2009) suggests one dry port per one million TEU handled at the country’s seaports. The size of dry ports would likewise vary according to the industrial production and commercial transactions in the area served by the facility. The size of dry ports in the European Union is seen to vary from a yearly throughput of 40,000 TEU up to 2 million TEU; their land area similarly ranges between 30 and 200 ha; the number of associated user enterprises varies between 25 and 100; and the number of employees varies between 7000 and 37,000 persons.

The role of dry ports in facilitating and developing the international trade of large countries of bottlenecked seaports is unquestionable (Haralambides and Londono-Kent, 2004 and Haralambides et al., 1997). Moreover, by increasingly becoming basic infrastructure – albeit with considerable private sector financial interests – dry ports contribute to economic development; easing of public funding requirements; introduction of FDI and related technologies; and the enhancement of competition. Indian dry ports in particular are characterized by a dominant public presence – often not without good cause - which, in spite of the government’s determination to increase private sector involvement, makes the latter rather difficult; substantial excess capacity and related limit pricing policies by incumbent dry ports contribute to this, coupled with a fairly weak legal framework to ensure mitigation of risk and uncertainty for the private investor. Successful PPPs and greater involvement of the private sector in dry port operations would require pricing policies based on long-run average cost pricing aimed at full cost recovery by public and private dry port operators alike. This would eventually eliminate wasteful subsidies and cartelization, and establish a level playing field among the public and the private sectors. To achieve this, land should be made available to interested parties indiscriminately, at prices reflecting its opportunity cost. Moreover, possible government guidelines on pricing policies based on full cost recovery will necessitate the compilation and equitable dissemination of relevant statistics, as well as greater transparency and the adoption of a standardized accounting system (Haralambides, Verbeke, Musso, & Benacchio, 2001).