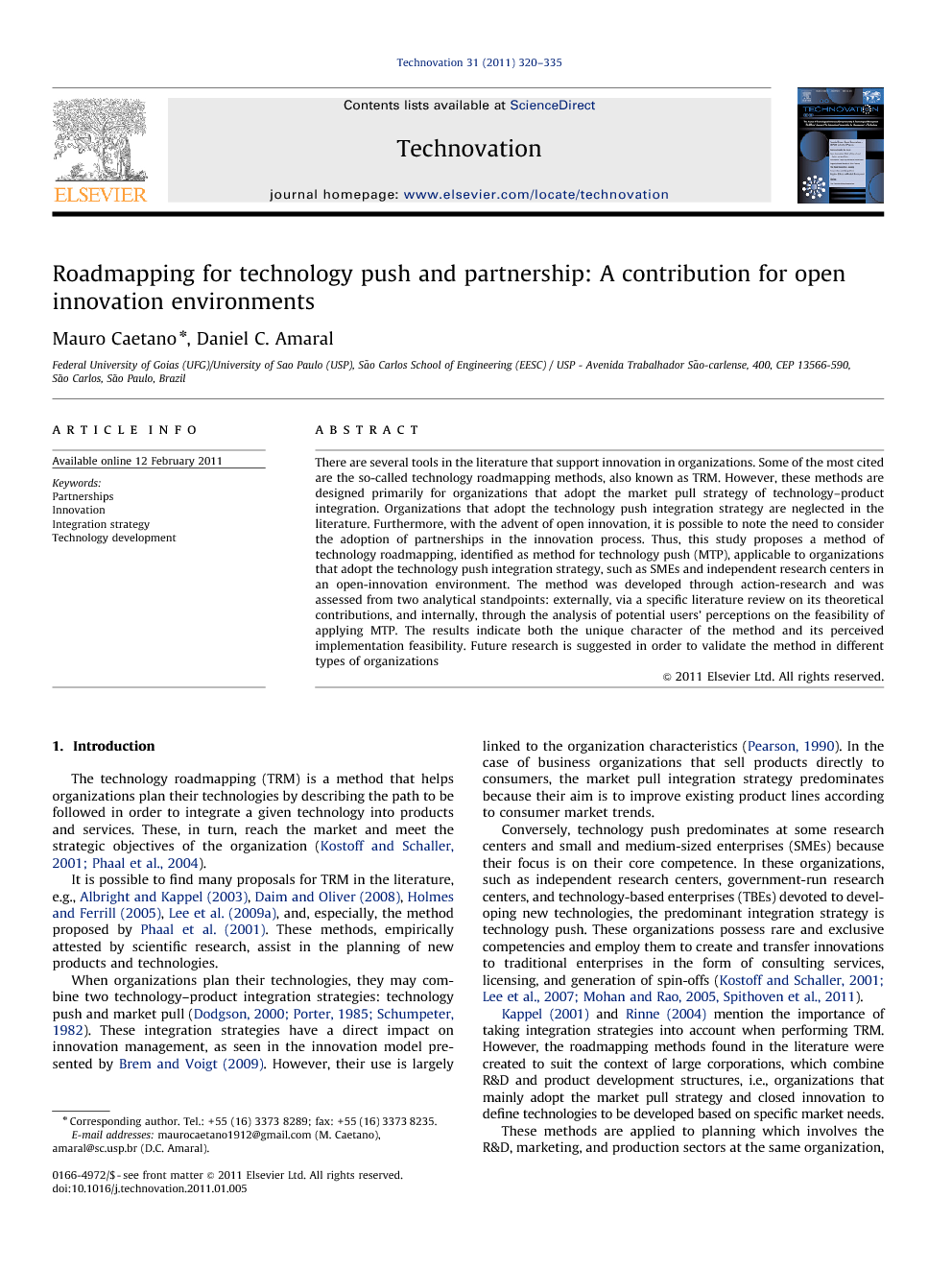 There are several tools in the literature that support innovation in organizations. Some of the most cited are the so-called technology roadmapping methods, also known as TRM. However, these methods are designed primarily for organizations that adopt the market pull strategy of technology–product integration. Organizations that adopt the technology push integration strategy are neglected in the literature. Furthermore, with the advent of open innovation, it is possible to note the need to consider the adoption of partnerships in the innovation process. Thus, this study proposes a method of technology roadmapping, identified as method for technology push (MTP), applicable to organizations that adopt the technology push integration strategy, such as SMEs and independent research centers in an open-innovation environment. The method was developed through action-research and was assessed from two analytical standpoints: externally, via a specific literature review on its theoretical contributions, and internally, through the analysis of potential users' perceptions on the feasibility of applying MTP. The results indicate both the unique character of the method and its perceived implementation feasibility. Future research is suggested in order to validate the method in different types of organizations

As stated by Birkinshaw et al. (2008), a management innovation is not made in a short period of time. It is necessary to identify the problem with the existent theory and methods, to examine cases in depth to understand all aspects of the problem, propose solutions, to spread the change to a range of organizations and only then, after several years of implementation, it is possible way to prove the external validity of the procedure. The method of TRM is already well studied in literature and can be considered mature and well validated. The article identifies a particular problem in the method, describes an opportunity to fix it, based on partnership and literature describes the development and implementation of a new practice to solve the problem. Two limitations are identified at this method. First, the practice has been validated only in terms of internal organization where the research took place. Second, the validation involved two aspects: the verification of the differential against existing theory and verification of internal change agents. She did not evaluate the proposal from the perspective of the impact on organizational performance. Thus, the main limitation of this research is the fact that this cycle is not complete. It is necessary to apply the method in other organizations and conduct assessments of the impact of practice on performance and innovation time and resources invested in planning (TRM). Although the feasibility of applying MTP, as perceived by its users, has been shown, we suggest that future research be conducted with the full implementation of the method at different organizations in different industrial sectors. This will be fundamental to complete the external validation of the method and to obtain data that can demonstrate its potential benefits, as described in this article. The research group will continue with these efforts. The merit of the work in this case is that the description of the proposed practice can serve as a beginning for these applications. It is suggested that other researchers to test and develop the practice tests and evaluations for the continuity of the solution identified. The research group of which the authors belong is already conducting two applications of the method. One for a new software technology for the testing of fruit at a distance and another for a research program on micro-harvests (planting of fruit in small, controlled environments such as homes) in the same organization studied. The next step the group will take the roadmap for other organizations, technology-based companies and other research institutes. This study also has identified opportunities for advanced research or further queries that may broaden the scope of the method. The first opportunity would be to research the adaptation and use of the method in large companies with market pull characteristics, and worried about open innovation. Another is the use of the method is the construction of competitive market intelligence systems and virtual spaces supporting the implementation of MTP in business clusters, containing SME's which has a technology push strategy.