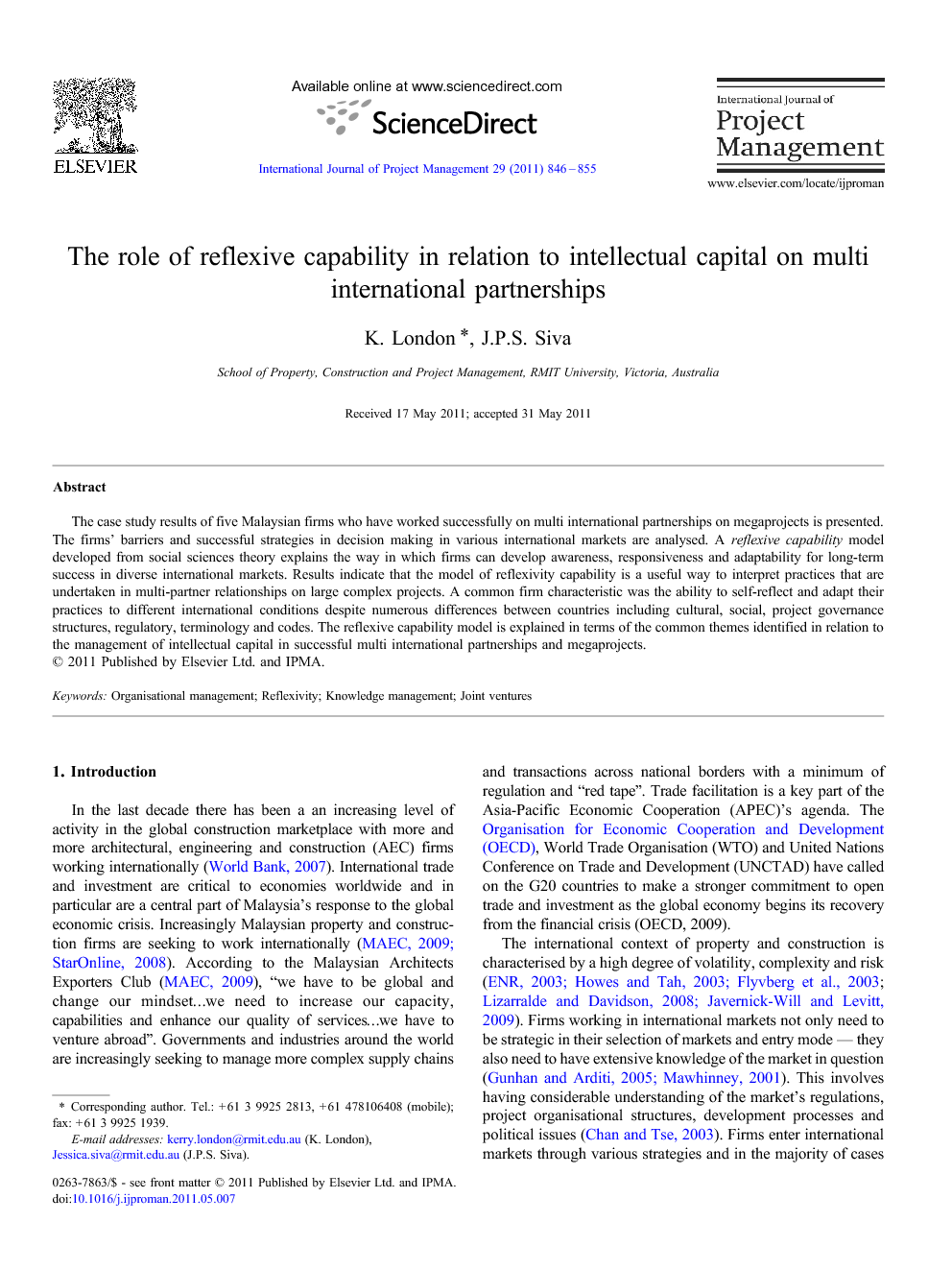 The case study results of five Malaysian firms who have worked successfully on multi international partnerships on megaprojects is presented. The firms' barriers and successful strategies in decision making in various international markets are analysed. A reflexive capability model developed from social sciences theory explains the way in which firms can develop awareness, responsiveness and adaptability for long-term success in diverse international markets. Results indicate that the model of reflexivity capability is a useful way to interpret practices that are undertaken in multi-partner relationships on large complex projects. A common firm characteristic was the ability to self-reflect and adapt their practices to different international conditions despite numerous differences between countries including cultural, social, project governance structures, regulatory, terminology and codes. The reflexive capability model is explained in terms of the common themes identified in relation to the management of intellectual capital in successful multi international partnerships and megaprojects.

In the last decade there has been a an increasing level of activity in the global construction marketplace with more and more architectural, engineering and construction (AEC) firms working internationally (World Bank, 2007). International trade and investment are critical to economies worldwide and in particular are a central part of Malaysia's response to the global economic crisis. Increasingly Malaysian property and construction firms are seeking to work internationally (Malaysian Architects Exporters Club, MAEC, 2009 and The Star Online, 2008). According to the Malaysian Architects Exporters Club (MAEC, 2009), “we have to be global and change our mindset…we need to increase our capacity, capabilities and enhance our quality of services…we have to venture abroad”. Governments and industries around the world are increasingly seeking to manage more complex supply chains and transactions across national borders with a minimum of regulation and “red tape”. Trade facilitation is a key part of the Asia-Pacific Economic Cooperation (APEC)'s agenda. The Organisation for Economic Cooperation and Development (OECD), World Trade Organisation (WTO) and United Nations Conference on Trade and Development (UNCTAD) have called on the G20 countries to make a stronger commitment to open trade and investment as the global economy begins its recovery from the financial crisis (OECD, 2009). The international context of property and construction is characterised by a high degree of volatility, complexity and risk (ENR, 2003, Howes and Tah, 2003 and Flyvbjerg et al., 2003; Lizarralde and Davidson, 2008 and Javernick-Will and Levitt, 2009). Firms working in international markets not only need to be strategic in their selection of markets and entry mode — they also need to have extensive knowledge of the market in question (Gunhan and Arditi, 2005 and Mawhinney, 2001). This involves having considerable understanding of the market's regulations, project organisational structures, development processes and political issues (Chan and Tse, 2003). Firms enter international markets through various strategies and in the majority of cases there is a significant reliance on developing cooperative and collaborative arrangements (Badger and Mulligan, 2002). In 2007, a study on successful internationalisation by Australian construction design firms (London and Chen, 2007) identified that social and business networks were critical to market entry, decision management and project success. More significantly though they initiated detailed examination on the characteristics of successful AEC sector firms that internationalise in relation to developing a certain capability which is intrinsic to successful export of creativity. A key part of the research outcomes was the development of a model for this capability which was termed ‘reflexivity’ which is concerned with the ability to self reflect upon practices and adapt to new environments. The relationship between underlying structures and the individual's behaviour within that structure is of central concern. When London and Chen (2007) translate this conceptual framework to the way in which firms internally self manage interesting insights are revealed. The concept of capital within the firm is critical to these insights. The underlying assumption to their work is that the practice of managing design is a social as well as an economic process. The ability to remain successful in the international market relies upon financial capital as well as non financial capital (Skaates et al., 2002, London et al., 2005a and London et al., 2005b). The consideration of other non-financial indicators of performance, which London et al., 2005a and London et al., 2005b defined as social, cultural and intellectual capital, assists the financial success of the export enterprise of firms. Social capital is the creation of personal relationships and networks based on trust built over time and has relevance for the project team and firm and client networks (Cohen and Prusak, 2001). Cultural capital entails physical ‘dispositions’ such as ‘building visible buildings, winning design competitions or obtaining important tenders’ (Skaates et al., 2002) premised on the firm's reputation in that its success‘depends upon the firm's ability to sell and deliver a credible promise' (Lowendahl, 2000). Intellectual capital is a firm's collective skills, competences and knowledge and is critical to the sustainability of firms, particularly in international markets (Stewart, 1997). This paper reports the findings of a study conducted to explore the uniqueness of successful partnerships between Australian and Malaysian property and construction professionals. The research specifically described in this paper represents a 12-month investigation. However the core of the intellectual thinking and ideas were initiated in a previous 18-month research project, funded by the Cooperative Research Centre for Construction Innovation entitled “Internationalisation of Australian Construction Design Firms” (London et al., 2005a and London et al., 2005b). The detailed case studies of two architectural firms and one construction development firm demonstrated that the integrated management of social, cultural and intellectual capital enhances long-term success in international markets. A generic framework mapping the key performance indicators for each of these dimensions was developed which can be adapted to unique contexts related to specific geographical localities (London, 2008). This research builds upon the previous study to explore the extent to which the performance measurement framework can contribute towards a greater understanding of which capabilities Malaysian construction firms have and which they need to develop for successful multi international megaprojects and collaborative partnerships. The reflexive capability maturity assessment framework presented in this paper is a form of a qualitative decision management tool which international firms can use to strategically manage the different forms of non-economic capital to manage the complexities in multi international megaprojects.