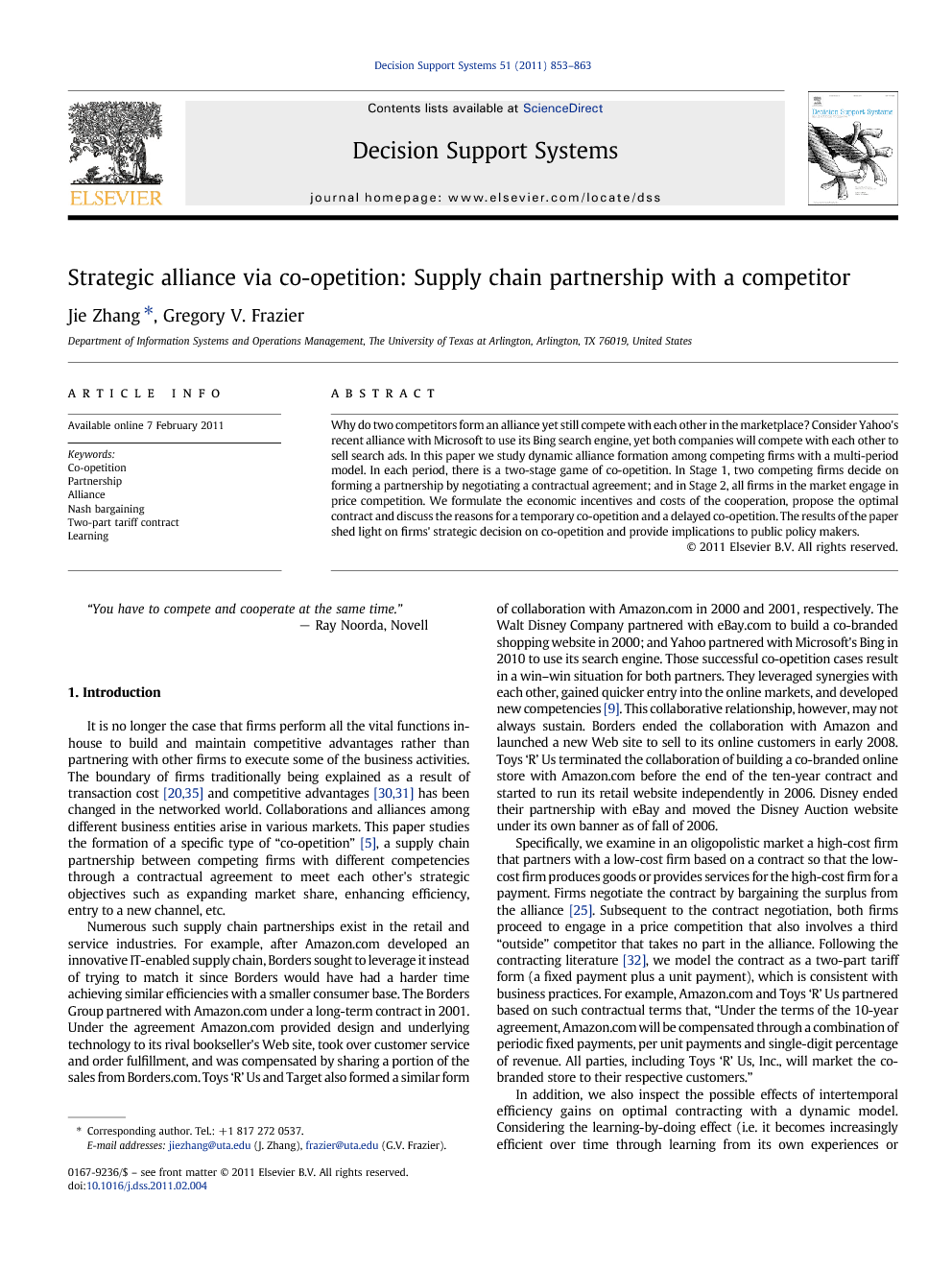 Why do two competitors form an alliance yet still compete with each other in the marketplace? Consider Yahoo's recent alliance with Microsoft to use its Bing search engine, yet both companies will compete with each other to sell search ads. In this paper we study dynamic alliance formation among competing firms with a multi-period model. In each period, there is a two-stage game of co-opetition. In Stage 1, two competing firms decide on forming a partnership by negotiating a contractual agreement; and in Stage 2, all firms in the market engage in price competition. We formulate the economic incentives and costs of the cooperation, propose the optimal contract and discuss the reasons for a temporary co-opetition and a delayed co-opetition. The results of the paper shed light on firms' strategic decision on co-opetition and provide implications to public policy makers.

It is no longer the case that firms perform all the vital functions in-house to build and maintain competitive advantages rather than partnering with other firms to execute some of the business activities. The boundary of firms traditionally being explained as a result of transaction cost [20] and [35] and competitive advantages [30] and [31] has been changed in the networked world. Collaborations and alliances among different business entities arise in various markets. This paper studies the formation of a specific type of “co-opetition” [5], a supply chain partnership between competing firms with different competencies through a contractual agreement to meet each other's strategic objectives such as expanding market share, enhancing efficiency, entry to a new channel, etc. Numerous such supply chain partnerships exist in the retail and service industries. For example, after Amazon.com developed an innovative IT-enabled supply chain, Borders sought to leverage it instead of trying to match it since Borders would have had a harder time achieving similar efficiencies with a smaller consumer base. The Borders Group partnered with Amazon.com under a long-term contract in 2001. Under the agreement Amazon.com provided design and underlying technology to its rival bookseller's Web site, took over customer service and order fulfillment, and was compensated by sharing a portion of the sales from Borders.com. Toys ‘R’ Us and Target also formed a similar form of collaboration with Amazon.com in 2000 and 2001, respectively. The Walt Disney Company partnered with eBay.com to build a co-branded shopping website in 2000; and Yahoo partnered with Microsoft's Bing in 2010 to use its search engine. Those successful co-opetition cases result in a win–win situation for both partners. They leveraged synergies with each other, gained quicker entry into the online markets, and developed new competencies [9]. This collaborative relationship, however, may not always sustain. Borders ended the collaboration with Amazon and launched a new Web site to sell to its online customers in early 2008. Toys ‘R’ Us terminated the collaboration of building a co-branded online store with Amazon.com before the end of the ten-year contract and started to run its retail website independently in 2006. Disney ended their partnership with eBay and moved the Disney Auction website under its own banner as of fall of 2006. Specifically, we examine in an oligopolistic market a high-cost firm that partners with a low-cost firm based on a contract so that the low-cost firm produces goods or provides services for the high-cost firm for a payment. Firms negotiate the contract by bargaining the surplus from the alliance [25]. Subsequent to the contract negotiation, both firms proceed to engage in a price competition that also involves a third “outside” competitor that takes no part in the alliance. Following the contracting literature [32], we model the contract as a two-part tariff form (a fixed payment plus a unit payment), which is consistent with business practices. For example, Amazon.com and Toys ‘R’ Us partnered based on such contractual terms that, “Under the terms of the 10-year agreement, Amazon.com will be compensated through a combination of periodic fixed payments, per unit payments and single-digit percentage of revenue. All parties, including Toys ‘R’ Us, Inc., will market the co-branded store to their respective customers.” In addition, we also inspect the possible effects of intertemporal efficiency gains on optimal contracting with a dynamic model. Considering the learning-by-doing effect (i.e. it becomes increasingly efficient over time through learning from its own experiences or spillovers from the alliance), we find it may be optimal for the high-cost firm to terminate a partnership at some point in time and subsequently move to self-sufficient production or services, or to delay the alliance after an initial period of self production or services. Based on the above setting, we intend to examine the following research questions: 1) Why and when should a high-cost firm overcome the efficiency disadvantage by forming an alliance with a low-cost competitor? Is the low-cost firm interested in forming the alliance given that it already enjoys a substantial cost-advantage? 2) What are the factors that affect the optimal co-opetition contract? 3) What are the implications of the co-opetition on the partner firms as well as on the outside competitor? Does such a co-opetition hurt consumers? What is the impact of the co-opetition on social welfare? The paper is organized as follows. Section 2 reviews the relevant literature. Section 3 presents a single-period competitive model and characterizes the strategic behavior of firms in the market with and without collaboration. It provides the incentive and tradeoffs for firms to partner. The decision process is analyzed with a two-stage game with each stage discussed in 3.1 and 3.2, respectively, and the impacts of a co-opetition practice on market competition and economic welfare are investigated in Subsection 3.4. Section 4 examines the optimal timing and duration of co-opetitions in a dynamic setting. Section 5 summarizes the major results and discusses the insights and implications. Conclusion and further research directions are provided in Section 6. All proofs to the propositions and corollaries are provided in the Appendix A.

Competitive relationships have been traditionally thought of as the ways in which prices, for example, emerge out of the competitive struggle between businesses [1]. This paper, however, proposes that even in very competitive industries, co-opetition can still exist as a certain kind of interfirm relationship. We exposit economic reasons behind co-opetition through a game theoretic model. A firm can contract out some of its weak business functions to a competing firm to gain efficiency instead of doing everything alone. The efficient partner can increase product lines or services without any effort in marketing to generate the demand. We derive the sufficient and necessary conditions for the co-opetition to be built. We find that alliances of this kind can make both partner firms better off even without equity sharing and ignoring economy of scale and demand externality. These findings suggest that outsourcing weak activities to a competitor to create a horizontal supply chain partnership may be a desirable option under certain conditions. Firms should consider the double effects co-opetition has on the firms in the market: efficiency effect and cooperative effect. They both benefit the low efficiency firm through enhancing its competence and the cooperation from the partner. The alliance increases the weak firm's performance to the detriment of its competitors by lowering their competitive advantage. The efficient partner gets compensated for its activities in the cooperation, yet the outsider could be worse off depending on the relative strength of the two effects and the reaction of the partner firms. We examine whether a co-opetition will sustain over time and a delayed alliance with a two-period dynamic model. It turns out with the learning of the weaker firm, the partnership formed in the first period may not be renewed in the second period. Our results have important implications for public policy makers. The co-opetition increases consumer welfare and social welfare when the efficiency effect outweighs the cooperative effect. The fixed fee payment in the two-part tariff contract is usually constrained to be nonnegative by antitrust laws. We derive the optimal contract under this restriction and find that by doing this, social welfare can be enhanced in a single period when the costs associated with the alliance formation are negligible. This conclusion, however, does not necessarily hold in the two period model, in which the second period profit is taken into account when the firms negotiate the contract terms. Opportunities for future related research abound. One avenue for extension of this research is to investigate the life expectancy of a co-opetition alliance as a function of the expected learning rate by the less efficient firm. Another future research path is to examine the impact of the alliance on Firm 1's production capacity management and the risks involved with expanding its capacity to accommodate Firm 3's goods. Yet another future research direction is to analyze how the life expectancy of the goods or services impacts the optimal strategies in forming an alliance.