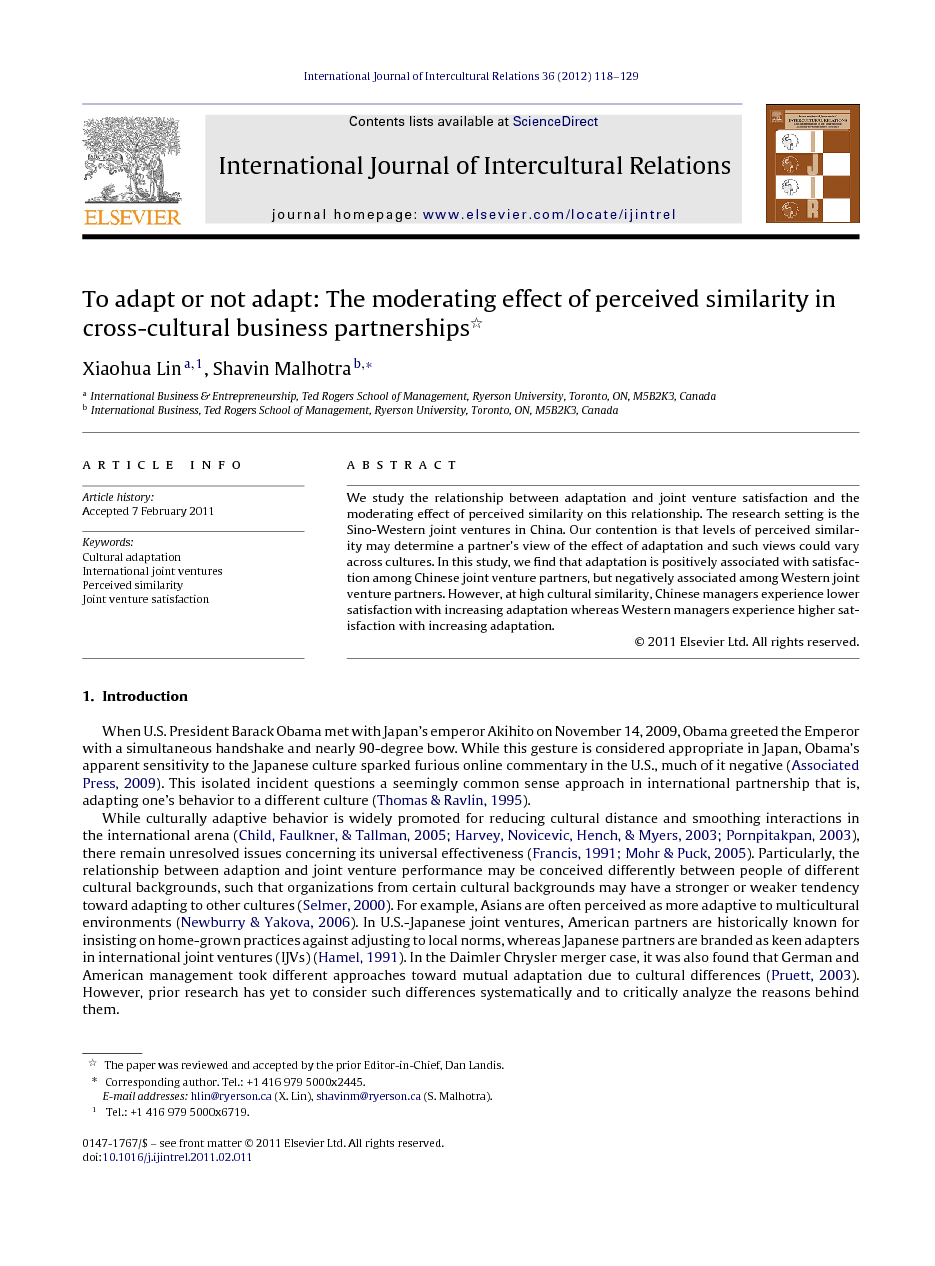 When U.S. President Barack Obama met with Japan's emperor Akihito on November 14, 2009, Obama greeted the Emperor with a simultaneous handshake and nearly 90-degree bow. While this gesture is considered appropriate in Japan, Obama's apparent sensitivity to the Japanese culture sparked furious online commentary in the U.S., much of it negative (Associated Press, 2009). This isolated incident questions a seemingly common sense approach in international partnership that is, adapting one's behavior to a different culture (Thomas & Ravlin, 1995). While culturally adaptive behavior is widely promoted for reducing cultural distance and smoothing interactions in the international arena (Child et al., 2005, Harvey et al., 2003 and Pornpitakpan, 2003), there remain unresolved issues concerning its universal effectiveness (Francis, 1991 and Mohr and Puck, 2005). Particularly, the relationship between adaption and joint venture performance may be conceived differently between people of different cultural backgrounds, such that organizations from certain cultural backgrounds may have a stronger or weaker tendency toward adapting to other cultures (Selmer, 2000). For example, Asians are often perceived as more adaptive to multicultural environments (Newburry & Yakova, 2006). In U.S.-Japanese joint ventures, American partners are historically known for insisting on home-grown practices against adjusting to local norms, whereas Japanese partners are branded as keen adapters in international joint ventures (IJVs) (Hamel, 1991). In the Daimler Chrysler merger case, it was also found that German and American management took different approaches toward mutual adaptation due to cultural differences (Pruett, 2003). However, prior research has yet to consider such differences systematically and to critically analyze the reasons behind them. Besides national culture, we suspect that perceived similarity between interacting parties may also have a moderating effect on the link from adaptation to satisfaction. Intuitively, a certain degree of dissimilarity is necessary for adaptation to occur. However, parties’ latitude for dissimilarity may vary such that adaptation is perceived as manageable only at a certain degree of dissimilarity (Witte, 1993). While the similarity–attraction paradigm (Byrne, 1971) considers increased similarity as the reason for adaptation, similarity may not play the same role across groups, for example, between ethnic majorities and minorities (Osbeck, Moghaddam, & Perreault, 1997). There is evidence that “cultural similarity could be as difficult to adjust to as cultural dissimilarity” (Selmer & Lauring, 2009, p. 430), and we suspect that this might have to do with some motivational effects in cross-cultural encounters (Chen, Kirkman, Kim, & Farh, 2010). Since adaptation could represent a demanding and sometimes painful experience, the effort must be justified by a perceptible gain. Our objective is thus twofold. First, we empirically test whether cultural adaptation leads to increased satisfaction for all involved firms. We argue that national culture may exert influence on a party's beliefs, attitudes, and behavioral propensity toward adaptation. Besides differences in national culture dimensions, we also consider the relative positions of the interacting parties. Second, we consider the moderating effect of perceived similarity in the adaptation–satisfaction relationship and how such a moderating effect holds between managers who enter a relationship with cultural and motivational differences. Our research setting is Sino-Western joint ventures in China, a major destination for foreign direct investment which has witnessed extensive interactions between local and Western business partners. China's foreign direct investments increased from $55 billion in 2004 to $138 billion in 2007 (World Bank Indicators, 2009)—most of which are directed into IJVs (US Fed News, 2008). Importantly, the Chinese culture is considered to be vastly different from those of Western countries, making an ideal testing ground for cross-cultural effects such as those proposed in the present study.