عنوان انگلیسی
Successful promotion or segregation from partnership? An examination of the “post-senior manager” position in public accounting and the implications for women's careers
دانلود فوری مقاله + سفارش ترجمه 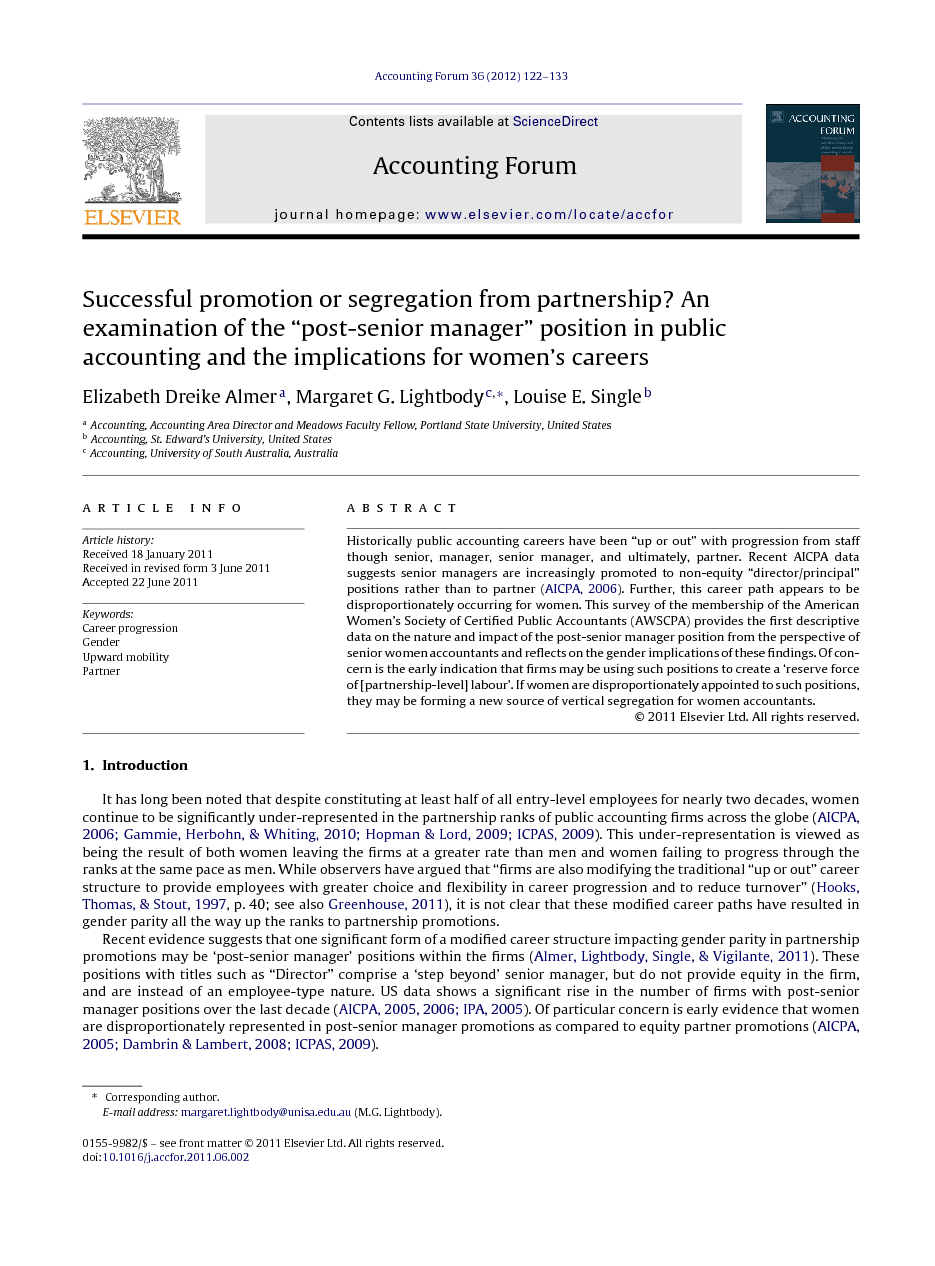 Historically public accounting careers have been “up or out” with progression from staff though senior, manager, senior manager, and ultimately, partner. Recent AICPA data suggests senior managers are increasingly promoted to non-equity “director/principal” positions rather than to partner (AICPA, 2006). Further, this career path appears to be disproportionately occurring for women. This survey of the membership of the American Women's Society of Certified Public Accountants (AWSCPA) provides the first descriptive data on the nature and impact of the post-senior manager position from the perspective of senior women accountants and reflects on the gender implications of these findings. Of concern is the early indication that firms may be using such positions to create a ‘reserve force of [partnership-level] labour’. If women are disproportionately appointed to such positions, they may be forming a new source of vertical segregation for women accountants.

This exploratory study lays the groundwork for future research on post-senior manager positions by providing insights into the specific responsibilities of the position, and the possible costs and benefits to firms and professionals from the viewpoint of women professionals themselves. The survey findings significantly contribute to the academic and practitioner community's limited understanding of the frequency and nature of post-senior manager positions in public accounting firms and the potential gender impact of the introduction of such positions into firms’ career structures. Overall, the study raises concerns that while post-senior manager positions might appear to offer new opportunities for promotion beyond the traditional ‘up-or-out’ model, they may in fact constitute ‘exclusion-as-usual’ for women professionals by facilitating a new form of gender segregation or exclusion strategy at the most senior level of accounting firms (Dwyer and Roberts, 2004 and Roberts and Coutts, 1992). In particular, this study indicates that the post-senior manager role does not appear, in general, to be either the equivalent of a partnership role nor a step to partnership, but rather allows the firms to create a ‘reserve army of labour’ to perform work traditionally undertaken by partners but without the status or remuneration of partnership. Such positions do not appear to be providing the majority of women accountants with either desirable career choices, nor with career flexibility, but rather with a terminal position described by the study participants as a temporary “holding place” for woman. In consequence of the above findings, there is an urgent need for further in-depth research to ensure the impact of such positions on gender equality and the upward mobility of women accountants is understood and critically evaluated, not just asserted by accounting firms. In particular, future research needs to “flesh out” the diverse nature of these positions, the factors influencing their creation by the accounting firms, and the degree to which the positions are designed to suit the agendas of the firms rather than those of their employees. Accounting researchers also need to better understand the reasons why accounting professionals, both male and female, accept such positions, the place of such positions in their longer term careers, and whether there are gender differences in such findings. In particular, researchers need to ask the question raised by the NAWL (2006, p. 16) in regards to law firms: are post-senior manager positions a means of retaining women who “are denied partnership status for legitimate reasons” or are women continuing to be excluded from partnership by being “disproportionately directed into [post-senior manager] positions instead of promoted to partner level work and compensation”?