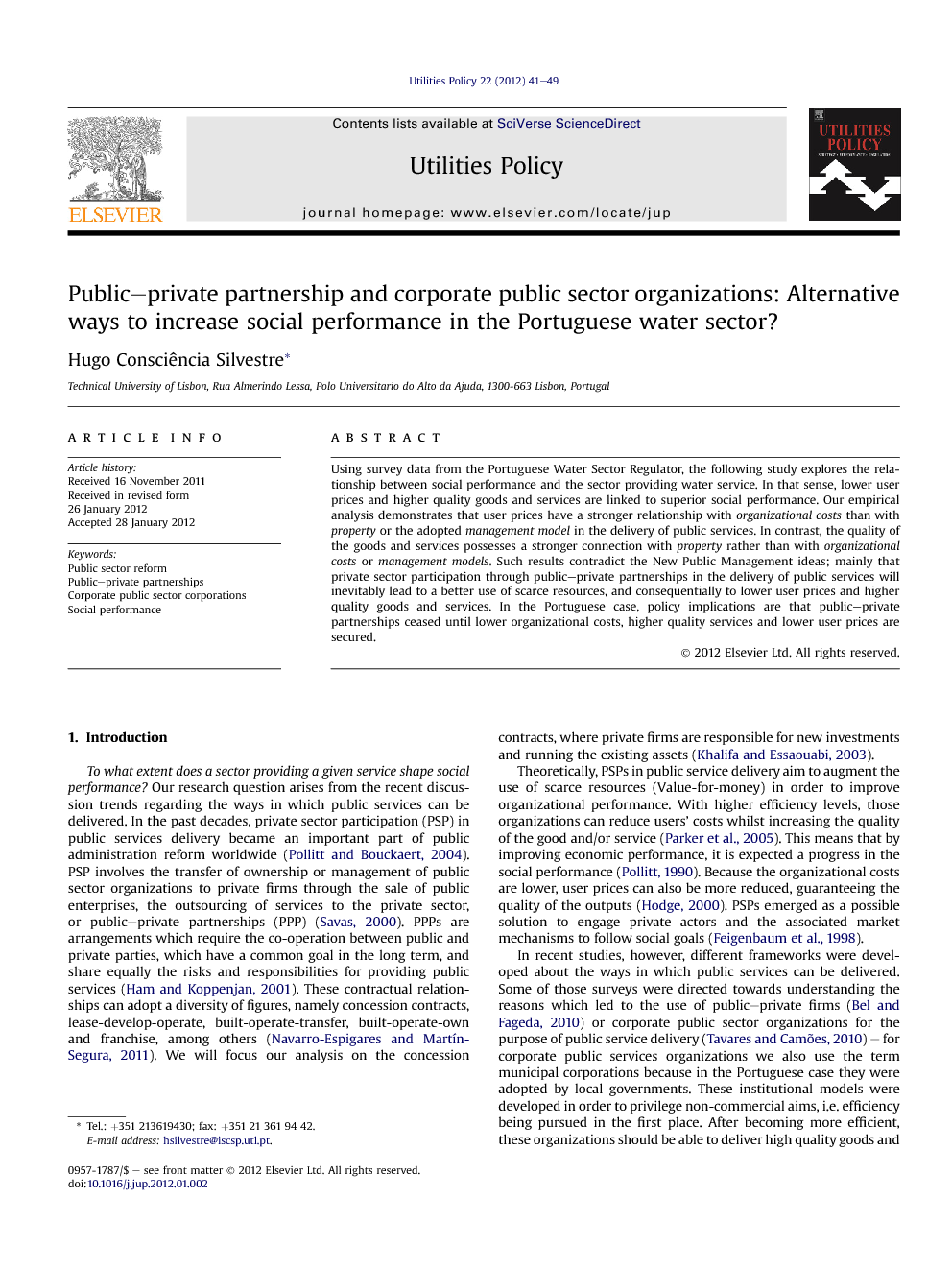 Using survey data from the Portuguese Water Sector Regulator, the following study explores the relationship between social performance and the sector providing water service. In that sense, lower user prices and higher quality goods and services are linked to superior social performance. Our empirical analysis demonstrates that user prices have a stronger relationship with organizational costs than with property or the adopted management model in the delivery of public services. In contrast, the quality of the goods and services possesses a stronger connection with property rather than with organizational costs or management models. Such results contradict the New Public Management ideas; mainly that private sector participation through public–private partnerships in the delivery of public services will inevitably lead to a better use of scarce resources, and consequentially to lower user prices and higher quality goods and services. In the Portuguese case, policy implications are that public–private partnerships ceased until lower organizational costs, higher quality services and lower user prices are secured.

To what extent does a sector providing a given service shape social performance? Our research question arises from the recent discussion trends regarding the ways in which public services can be delivered. In the past decades, private sector participation (PSP) in public services delivery became an important part of public administration reform worldwide (Pollitt and Bouckaert, 2004). PSP involves the transfer of ownership or management of public sector organizations to private firms through the sale of public enterprises, the outsourcing of services to the private sector, or public–private partnerships (PPP) (Savas, 2000). PPPs are arrangements which require the co-operation between public and private parties, which have a common goal in the long term, and share equally the risks and responsibilities for providing public services (Ham and Koppenjan, 2001). These contractual relationships can adopt a diversity of figures, namely concession contracts, lease-develop-operate, built-operate-transfer, built-operate-own and franchise, among others (Navarro-Espigares and Martín-Segura, 2011). We will focus our analysis on the concession contracts, where private firms are responsible for new investments and running the existing assets (Khalifa and Essaouabi, 2003). Theoretically, PSPs in public service delivery aim to augment the use of scarce resources (Value-for-money) in order to improve organizational performance. With higher efficiency levels, those organizations can reduce users’ costs whilst increasing the quality of the good and/or service (Parker et al., 2005). This means that by improving economic performance, it is expected a progress in the social performance (Pollitt, 1990). Because the organizational costs are lower, user prices can also be more reduced, guaranteeing the quality of the outputs (Hodge, 2000). PSPs emerged as a possible solution to engage private actors and the associated market mechanisms to follow social goals (Feigenbaum et al., 1998). In recent studies, however, different frameworks were developed about the ways in which public services can be delivered. Some of those surveys were directed towards understanding the reasons which led to the use of public–private firms (Bel and Fageda, 2010) or corporate public sector organizations for the purpose of public service delivery (Tavares and Camões, 2010) – for corporate public services organizations we also use the term municipal corporations because in the Portuguese case they were adopted by local governments. These institutional models were developed in order to privilege non-commercial aims, i.e. efficiency being pursued in the first place. After becoming more efficient, these organizations should be able to deliver high quality goods and services, with lower user prices. The social dimension is thus emphasized by this approach (Bel and Fageda, 2010). Due to the recent discussion on how public services can be provided, it is possible to carry out a survey in order to understand the regularities between the sector providing the services and social performance. We chose the water sector due to the lack of systematic analysis and statistical evidence in the relationship between the sector providing the service, the quality of the good and/or service, and user prices (Tati, 2005 and Wallsten and Kosec, 2008). Additionally, this study is an assessment of the results of PSP in public services delivery, as well as a contribution to the theoretical arguments that support recent public sector reform (especially when the main concern is social performance). As you will see, this paper is organized as follows: firstly, we cover the literature concerning the description of PSPs and their theoretical support; then, we describe the emergence of Portuguese municipal corporations in public services delivery. After the description of the theoretical influences of PPPs and the emergence of corporate public sector organizations, we detail our working hypotheses and variables. At last, we will present our research results and conclusions.

In one hand, PSP allows (in theory) users to increase their consumption benefits through lower prices and higher quality services, due to higher efficiency levels (decree-law n. 194 of 2009). On the other hand, municipal corporations offer another possibility in public services delivery. These corporations should be run as a business, just like a private firm. Nevertheless, their main aim is still linked to non-commercial goals. Our statistical findings on the Portuguese Water Sector show that municipal corporations are related to a higher social performance in comparison with private firms. For instance, user prices and the quality of the good and service are positively correlated with municipal corporations rather than with private firms. Nevertheless, even municipal corporations did not prove to have a better social performance than bureaucracies. We must be cautious when interpreting these results, with two reflections. The first is that the sector providing the service shaped social performance even when PSP benefits were not proved. With higher user prices and the same quality in the Portuguese water services delivery, the NPM theoretical reasons for PPPs usage were not proved, due to the difficulty in promoting competition under natural monopolies. Even in similar legal frameworks, municipal corporations present similar quality levels but lower user prices. For this reason we can conclude that publicly managed organizations score better social performance levels than PPPs in 2009. The second reflection has arisen from recent literature which has questioned whether post-bureaucratic organizations perform worse than traditional bureaucracies (Pollitt, 2009). Our reflection originates in the previous results. However, in this study the results connected with the bureaucracies must be carefully interpreted considering the reasons mentioned above. If PPPs do not present the same social performance when compared to municipal corporations, we still do not know how clear the last results can be in comparison with public bureaucracies. Since public bureaucracies can internally share their costs they can lower user prices thus benefiting from it. Yet, this is about to change after the approval of a new law (no. 194) in January 2009. The new law requires an internalization of all the organizational costs regarding water services delivery. So it is foreseeable that from now on client prices will increase under public property or public management. What we do not know is the extent of the increases even if the press already echoes a number: around 150% increase in the tariffs in Celorico de Bastos, for example.1 On the other hand, we expect that over the next few years user prices for water service delivery will be higher in areas served by private organizations. The reasons have to do with the contract life-cycle. The majority of those concession contracts is now on its second stage, which means that tariffs will go up every year. Initially, under the public utility concession contract the town-hall would not allow a significant rise in water prices, because it would have political consequences in elections four years later (James and John, 2006). In other words, politicians will not risk tariff increases in a first stage to safeguard their re-election. Since then, we have moved on to the second stage, where prices are getting higher every year as established in the contracts. At this point we argue, from a policy implications perspective, that PPPs are not the best way to guarantee lower user prices with higher quality services. That is why six tenders have recently been cancelled due to the unacceptability of proposals. Without fair competition, efficiency and even quality cannot be guaranteed under a PPP scheme (cf.Silvestre and Araújo, in press). In such cases, municipal corporations proved to be an alternative to PPPs. Nonetheless we ought to wait for more data in order to understand how the internalization costs law will impact local bureaucracies’ scores. Due to the above-mentioned considerations, further studies must be conducted in the next few years so that the social performance levels can be clarified beyond any reasonable doubt. In addition to the water sector, others should be studied, whenever possible, in order to enrich the ongoing theoretical and empirical discussion about the ways public services can be delivered. Such surveys should also consider other national experiences, and not exclusively the Portuguese, since the organizational framework is different from one country to another.