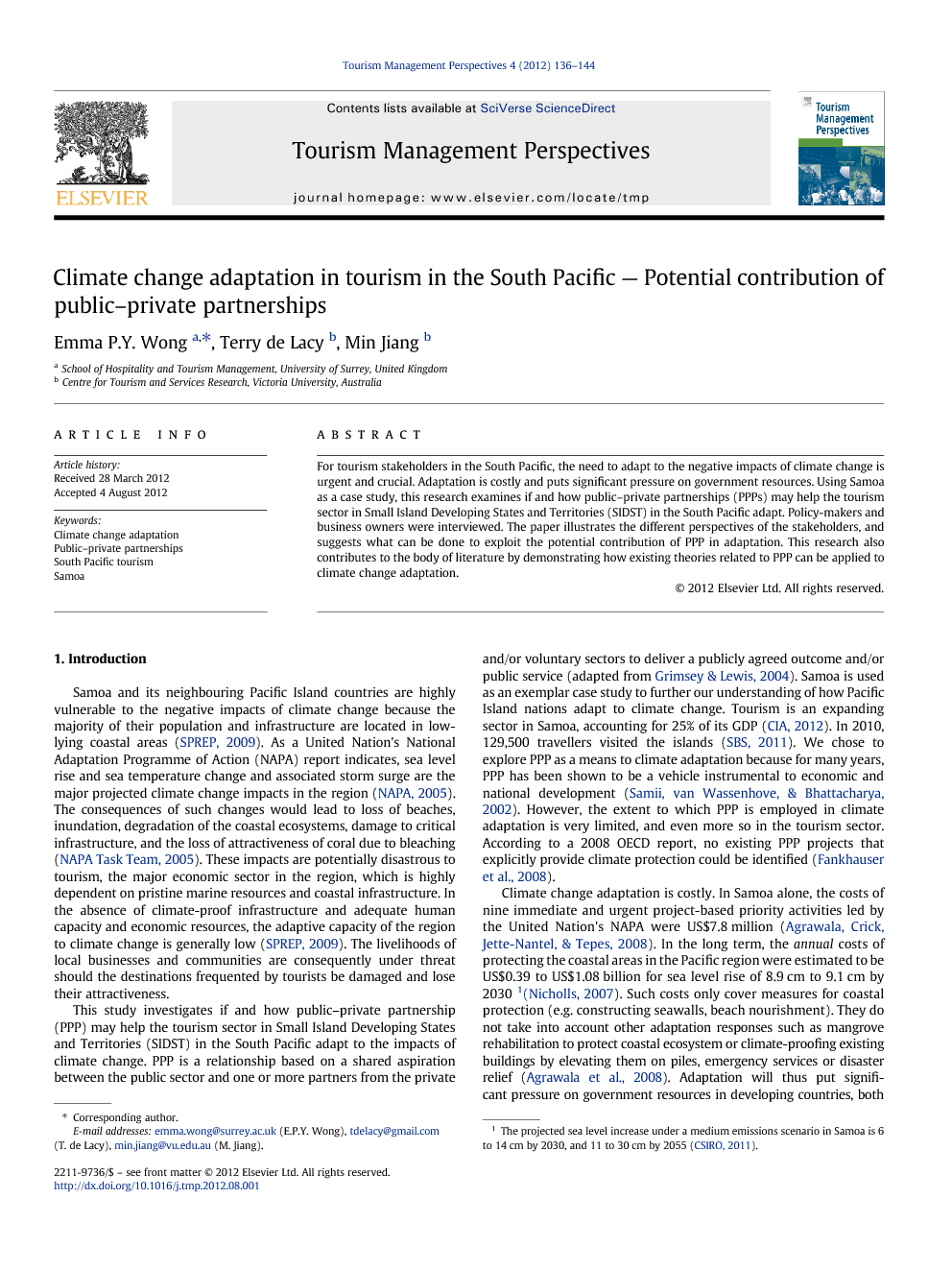 For tourism stakeholders in the South Pacific, the need to adapt to the negative impacts of climate change is urgent and crucial. Adaptation is costly and puts significant pressure on government resources. Using Samoa as a case study, this research examines if and how public–private partnerships (PPPs) may help the tourism sector in Small Island Developing States and Territories (SIDST) in the South Pacific adapt. Policy-makers and business owners were interviewed. The paper illustrates the different perspectives of the stakeholders, and suggests what can be done to exploit the potential contribution of PPP in adaptation. This research also contributes to the body of literature by demonstrating how existing theories related to PPP can be applied to climate change adaptation.

Samoa and its neighbouring Pacific Island countries are highly vulnerable to the negative impacts of climate change because the majority of their population and infrastructure are located in low-lying coastal areas (SPREP, 2009). As a United Nation's National Adaptation Programme of Action (NAPA) report indicates, sea level rise and sea temperature change and associated storm surge are the major projected climate change impacts in the region (NAPA, 2005). The consequences of such changes would lead to loss of beaches, inundation, degradation of the coastal ecosystems, damage to critical infrastructure, and the loss of attractiveness of coral due to bleaching (NAPA Task Team, 2005). These impacts are potentially disastrous to tourism, the major economic sector in the region, which is highly dependent on pristine marine resources and coastal infrastructure. In the absence of climate-proof infrastructure and adequate human capacity and economic resources, the adaptive capacity of the region to climate change is generally low (SPREP, 2009). The livelihoods of local businesses and communities are consequently under threat should the destinations frequented by tourists be damaged and lose their attractiveness. This study investigates if and how public–private partnership (PPP) may help the tourism sector in Small Island Developing States and Territories (SIDST) in the South Pacific adapt to the impacts of climate change. PPP is a relationship based on a shared aspiration between the public sector and one or more partners from the private and/or voluntary sectors to deliver a publicly agreed outcome and/or public service (adapted from Grimsey & Lewis, 2004). Samoa is used as an exemplar case study to further our understanding of how Pacific Island nations adapt to climate change. Tourism is an expanding sector in Samoa, accounting for 25% of its GDP (CIA, 2012). In 2010, 129,500 travellers visited the islands (SBS, 2011). We chose to explore PPP as a means to climate adaptation because for many years, PPP has been shown to be a vehicle instrumental to economic and national development (Samii, van Wassenhove, & Bhattacharya, 2002). However, the extent to which PPP is employed in climate adaptation is very limited, and even more so in the tourism sector. According to a 2008 OECD report, no existing PPP projects that explicitly provide climate protection could be identified (Fankhauser et al., 2008). Climate change adaptation is costly. In Samoa alone, the costs of nine immediate and urgent project-based priority activities led by the United Nation's NAPA were US$7.8 million (Agrawala, Crick, Jette-Nantel, & Tepes, 2008). In the long term, the annual costs of protecting the coastal areas in the Pacific region were estimated to be US$0.39 to US$1.08 billion for sea level rise of 8.9 cm to 9.1 cm by 203011(Nicholls, 2007). Such costs only cover measures for coastal protection (e.g. constructing seawalls, beach nourishment). They do not take into account other adaptation responses such as mangrove rehabilitation to protect coastal ecosystem or climate-proofing existing buildings by elevating them on piles, emergency services or disaster relief (Agrawala et al., 2008). Adaptation will thus put significant pressure on government resources in developing countries, both financial and administrative. Further challenge is posed by the continuing global economic crisis as aid and investment funding may no longer be offered in the amount and/or on the timeline expected. While PPPs are no panacea, carefully structured partnerships can potentially provide the ability to finance expensive adaptation projects outside the government budget and alleviate the fiscal pressure in developing nations. Given the importance and urgency of adaptation in Pacific Island countries, the significance of tourism to the region, and the paucity of adaptation-related PPP projects, there is a strong need for research that explores the potential benefit of employing PPPs as means to help the tourism sector adapt to climate change. This Samoa case study does not only offer practical recommendations to the relevant government agencies and companies, but also contribute to the body of knowledge by expanding the boundaries of existing PPP and adaptation literature.

Climate change adaptation is costly and puts significant pressure on government resources in developing countries. This study sets out to investigate if and how PPP may help the tourism sector in SIDST in the South Pacific such as Samoa adapt to the impacts of climate change. Based on our literature review, we established an understanding of climate change adaptation and PPP from a theoretical perspective. The empirical findings show that PPPs can indeed potentially contribute to adaptation in Samoan tourism, mainly in the areas of technical, educational and behavioural adaptation (Scott et al., 2008). There is no one standard form of PPP. The projects proposed involved a range of adaptation measures such as early warning systems, an eco-village with touristic and educational features, and coastal infrastructure protection. The suggested partnerships may allow both the public and private sectors achieve mutually beneficial goals (i.e. reciprocity), efficiency, predictability in an environment of uncertainty (i.e. stability), and/or legitimacy (Oliver, 1990). In other words, the potential benefit of PPP is beyond financial. Our findings also demonstrate that, in order to facilitate the formation of PPPs, a certain level of trust needs to be established between the public and private sectors. Goals that are beneficial to both parties must be set at the beginning. On the part of the government, it is their responsibility to formulate a transparent and practical PPP policy. As to the private sector, its members should recognise the important role that they play in adaptation and that PPP can be a win–win relationship. Their entrepreneurial spirit and innovativeness would be invaluable assets that facilitate the formation and the process of PPPs. Since the tourism industry in the region is mostly made up of small and medium enterprises, companies can consider forming an alliance so that they can pool their resources and negotiate with the government with a larger voice. The contribution of this paper is two-fold. First, it provides pragmatic suggestions to an important issue that is affecting the livelihood and well-being of communities in SIDST in the South Pacific. Second, it contributes to the body of knowledge by demonstrating how theories related to PPP can be applied in climate change adaptation in tourism. We acknowledge that PPP is no panacea to the adaptation issues in Samoa or other SIDST in the South Pacific region. It is important that feasibility, and cost and benefit analyses be conducted prior to deciding whether or not a partnership should be formed. We also recognise that this study is a cross-sectional research and that the findings present a ‘snapshot’ of the phenomenon being examined. Changes in leadership in the government, for example, may lead to different study results. Finally, because of the paucity of research in adaptation in the tourism sector, we encourage the research community to continue to explore new approaches to adaptation and how those approaches can be implemented.