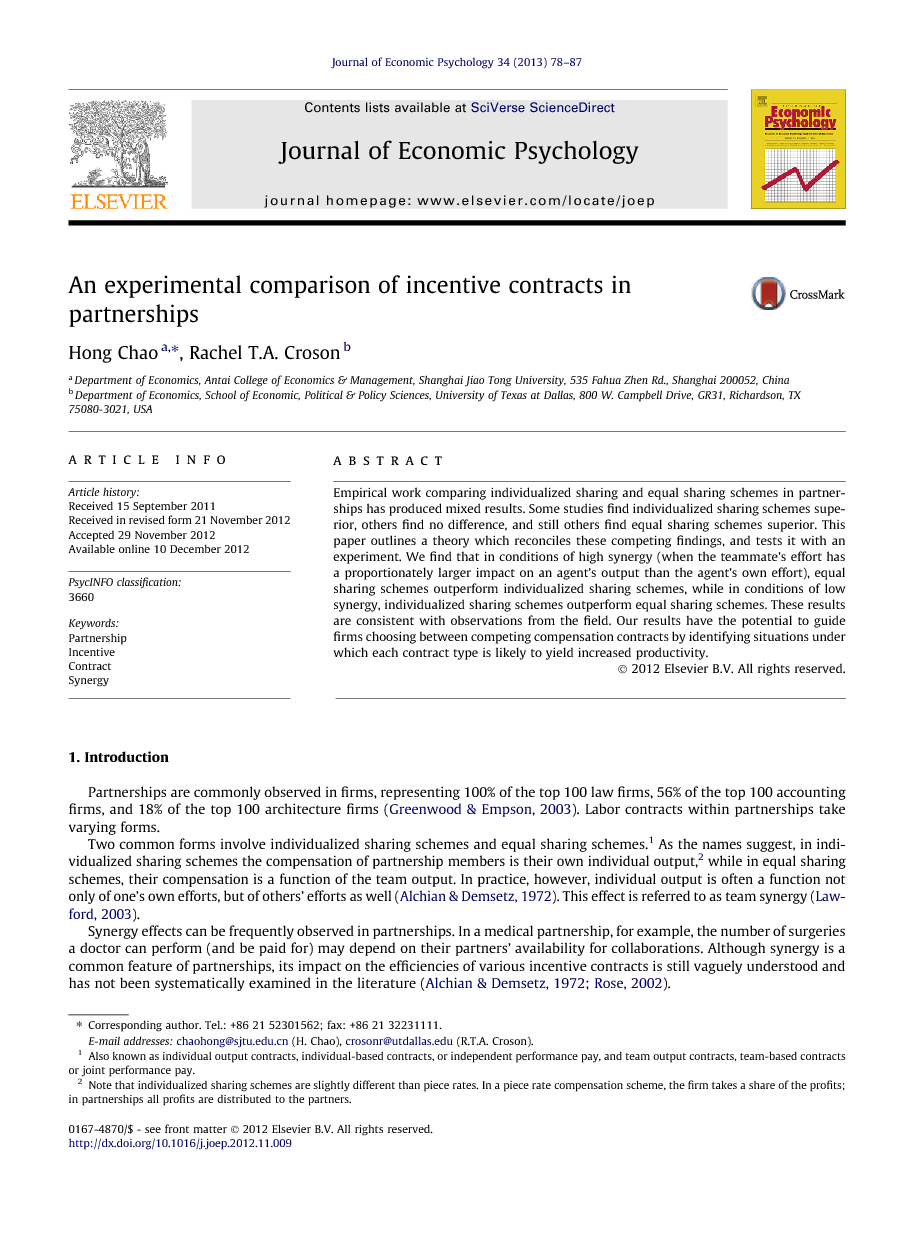 This paper theoretically and experimentally compares worker behavior in partnerships under conditions of high and low synergy and team and individual incentives. We find, as predicted, that efforts are significantly higher under individualized sharing in conditions of low synergy, and under equal sharing in conditions of high synergy. These results have important implications for our understanding of labor contracts and the compensation structures of partnerships. They help us to explain the puzzling frequency (and apparent success) of team incentive schemes in the presence of the incentive to free-ride. They allow us to predict when a partnership will choose team incentives (in conditions of high synergy) or individual incentives (in conditions of low synergy). Finally, our results make active recommendations for what types of contracts firms should choose, given their level of synergy. Future work is needed to reinforce our understanding about the effect of synergy on contract selection. One possible direction is to construct a measure of synergy level in practice. Previous studies have identified a few determinants of synergy including heterogeneity of worker ability (Chan et al., 2012 and Hamilton et al., 2003), heterogeneity of worker specialty (Lasker et al., 2001 and Pizzini, 2010), presence of assembly line work, need to cross-train workers, high absence costs, high job attachment (Brown et al., 2007, Heywood and Jirjahn, 2009 and Heywood et al., 2008), and level of social capital (Bandiera et al., 2010 and Gant et al., 2002). However, a comprehensive synergy evaluation mechanism is still needed, and may require involvement of both academia and industry. Another possible extension of our experiment is to include comparisons of other contract types under various synergy levels. For example, Chao and Siqueira (2013) provide theoretical predictions for the comparison between team output contracts and mixed contracts, which could be experimentally tested. Finally, as discussed in Section 2, peer monitoring is a competing explanation for the differential performance of these two contractual types. In our experiment we hold monitoring constant (always present) to focus on the impact of synergy, but in the field both may be relevant. For example, equal sharing schemes are more likely to be adopted by partners who have known each other for a long period of time. Two reasons suggest themselves. First, long-term relationships generate a high level of synergy due to the establishment of social capital (Bandiera et al., 2010 and Gant et al., 2002). But alternatively, long-term relationships make monitoring less costly (Kandel and Lazear, 1992 and Mas and Moretti, 2009). Future work might investigate the relative importance of these competing explanations. In conclusion, this study adds to our understanding of conditions under which individuals will exert effort or shirk in partnership settings. Ultimately this improved understanding has the potential to increase our ability to engage in contract design and elicit optimal effort levels from partners in a variety of settings.