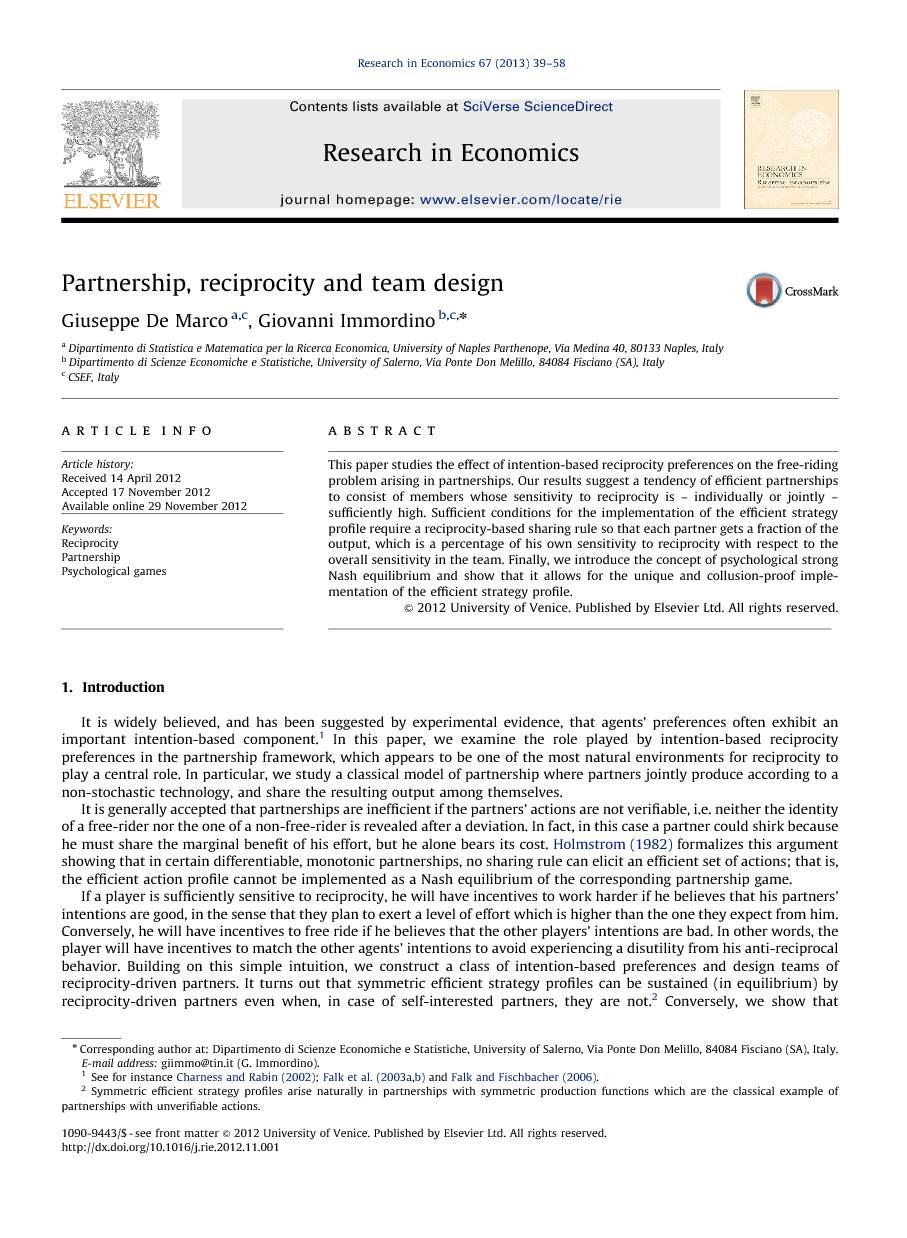 This paper studies the effect of intention-based reciprocity preferences on the free-riding problem arising in partnerships. Our results suggest a tendency of efficient partnerships to consist of members whose sensitivity to reciprocity is – individually or jointly – sufficiently high. Sufficient conditions for the implementation of the efficient strategy profile require a reciprocity-based sharing rule so that each partner gets a fraction of the output, which is a percentage of his own sensitivity to reciprocity with respect to the overall sensitivity in the team. Finally, we introduce the concept of psychological strong Nash equilibrium and show that it allows for the unique and collusion-proof implementation of the efficient strategy profile.

Even the best people do not always work together as well as they could. Simply assigning a group of people to a task does not magically turn them into a well-functioning team. Basic skills for managing a team may include: how to set agendas, leading priority setting, leading without dominating, project management skills, encouraging and facilitating a discussion, monitoring team progress, and so on. However, our results indicate that how well a partnership can overcome free riding depends between other things on the set of partners. In a world in which this choice is endogenous, there should be a tendency for the most efficient partnerships to form. Our efficiency results suggest a tendency of partnerships to consist of members whose sensitivity to reciprocity is – individually or jointly – sufficiently high. Our theory is a first step in understanding the impact of intention-based reciprocity preferences on the design of a team and on the design of sharing rules that lead to efficiency in the simple and relevant partnership framework where the efficient strategy profile is symmetric. The peculiarity of the partnership model is that it allows us to consider measures of kindness which depend only on effort and not on the particular material preferences representation. This captures the idea that a partner may react badly to other partners free-riding regardless of rewards. To conclude we discuss two possible extensions. Contingent reciprocity: To focus on the fact that kindness depends only on effort and not on the particular material preferences representation, in the previous analysis we considered constant reciprocity parameters and find conditions on such parameters which allow for the (unique) implementation of the efficient strategy profile. A more general analysis could take into account reciprocity parameters which depend on the sharing rule. However, this approach would require to use the concept of dynamic psychological equilibrium (Battigalli and Dufwenberg, 2009) and its refinements.