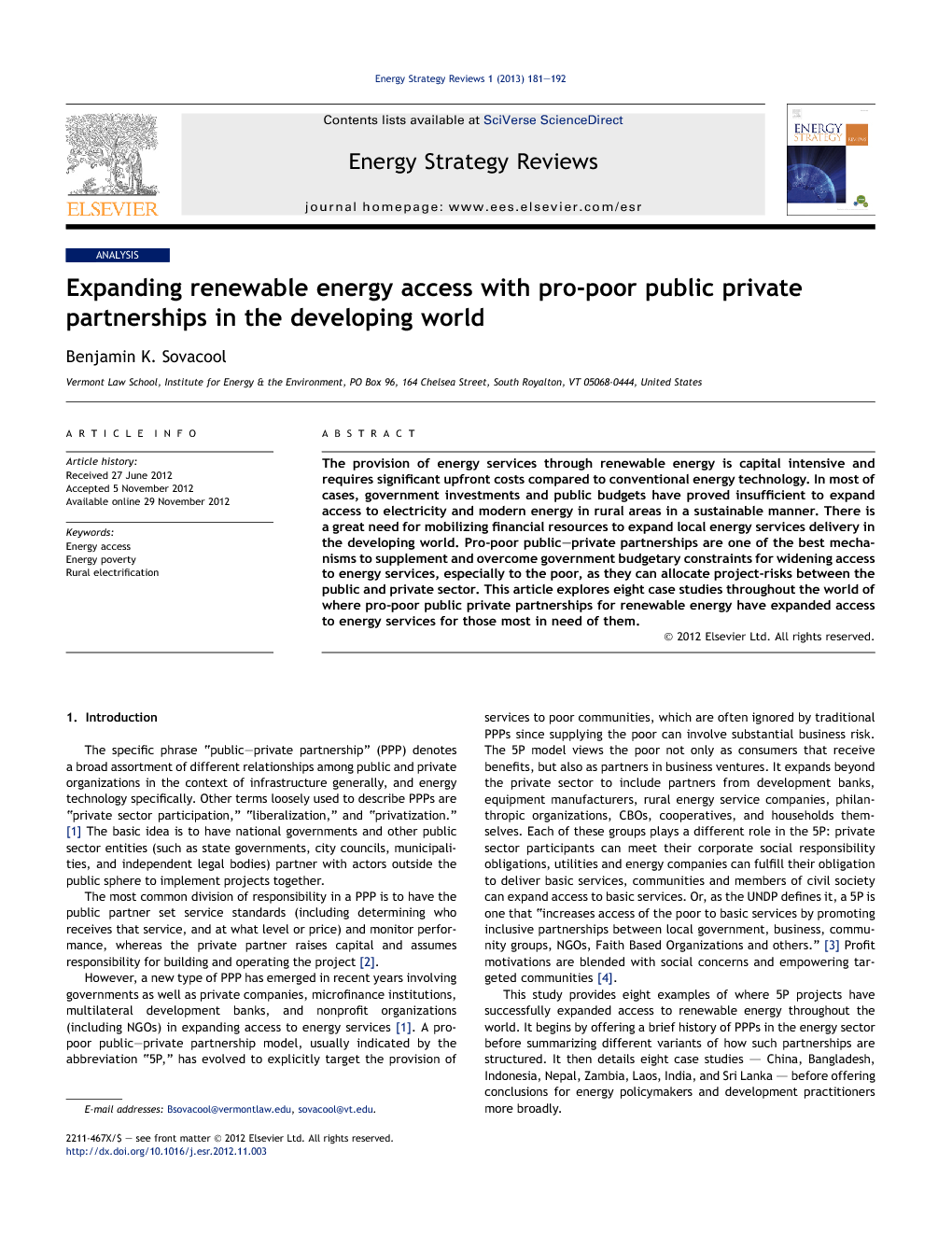 The provision of energy services through renewable energy is capital intensive and requires significant upfront costs compared to conventional energy technology. In most of cases, government investments and public budgets have proved insufficient to expand access to electricity and modern energy in rural areas in a sustainable manner. There is a great need for mobilizing financial resources to expand local energy services delivery in the developing world. Pro-poor public–private partnerships are one of the best mechanisms to supplement and overcome government budgetary constraints for widening access to energy services, especially to the poor, as they can allocate project-risks between the public and private sector. This article explores eight case studies throughout the world of where pro-poor public private partnerships for renewable energy have expanded access to energy services for those most in need of them.

The specific phrase “public–private partnership” (PPP) denotes a broad assortment of different relationships among public and private organizations in the context of infrastructure generally, and energy technology specifically. Other terms loosely used to describe PPPs are “private sector participation,” “liberalization,” and “privatization.” [1] The basic idea is to have national governments and other public sector entities (such as state governments, city councils, municipalities, and independent legal bodies) partner with actors outside the public sphere to implement projects together. The most common division of responsibility in a PPP is to have the public partner set service standards (including determining who receives that service, and at what level or price) and monitor performance, whereas the private partner raises capital and assumes responsibility for building and operating the project [2]. However, a new type of PPP has emerged in recent years involving governments as well as private companies, microfinance institutions, multilateral development banks, and nonprofit organizations (including NGOs) in expanding access to energy services [1]. A pro-poor public–private partnership model, usually indicated by the abbreviation “5P,” has evolved to explicitly target the provision of services to poor communities, which are often ignored by traditional PPPs since supplying the poor can involve substantial business risk. The 5P model views the poor not only as consumers that receive benefits, but also as partners in business ventures. It expands beyond the private sector to include partners from development banks, equipment manufacturers, rural energy service companies, philanthropic organizations, CBOs, cooperatives, and households themselves. Each of these groups plays a different role in the 5P: private sector participants can meet their corporate social responsibility obligations, utilities and energy companies can fulfill their obligation to deliver basic services, communities and members of civil society can expand access to basic services. Or, as the UNDP defines it, a 5P is one that “increases access of the poor to basic services by promoting inclusive partnerships between local government, business, community groups, NGOs, Faith Based Organizations and others.” [3] Profit motivations are blended with social concerns and empowering targeted communities [4]. This study provides eight examples of where 5P projects have successfully expanded access to renewable energy throughout the world. It begins by offering a brief history of PPPs in the energy sector before summarizing different variants of how such partnerships are structured. It then details eight case studies — China, Bangladesh, Indonesia, Nepal, Zambia, Laos, India, and Sri Lanka — before offering conclusions for energy policymakers and development practitioners more broadly.

Expanding renewable energy access for rural and increasingly poor communities is a daunting task. Those without electricity or dependent on traditional fuels tend to have income levels, purchasing power, and consumption levels far below what private companies and electric utilities typically deem profitable, reluctance further attenuated by the inaccessibility of the these communities to national electricity grids. Public officials, like