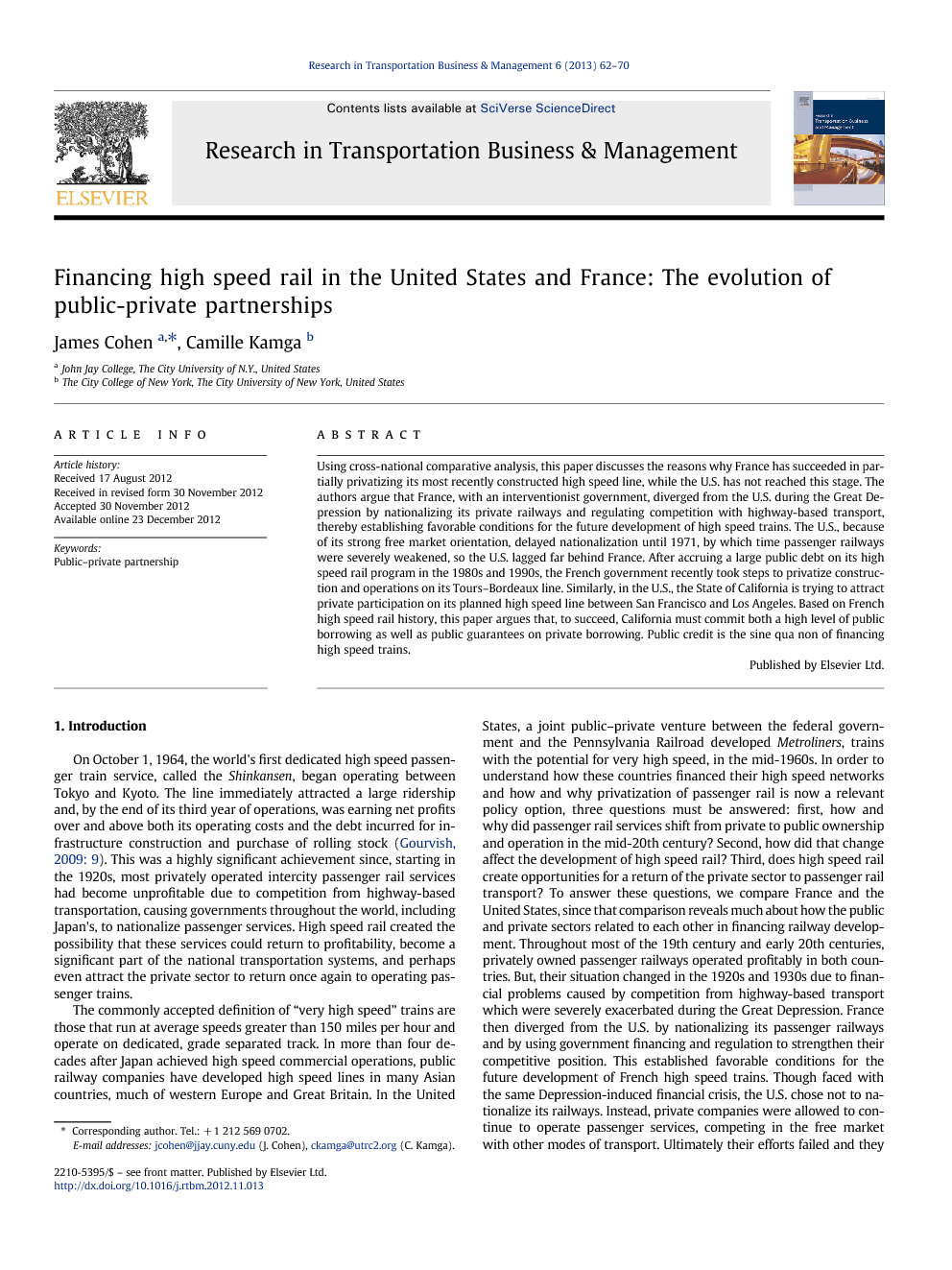 Using cross-national comparative analysis, this paper discusses the reasons why France has succeeded in partially privatizing its most recently constructed high speed line, while the U.S. has not reached this stage. The authors argue that France, with an interventionist government, diverged from the U.S. during the Great Depression by nationalizing its private railways and regulating competition with highway-based transport, thereby establishing favorable conditions for the future development of high speed trains. The U.S., because of its strong free market orientation, delayed nationalization until 1971, by which time passenger railways were severely weakened, so the U.S. lagged far behind France. After accruing a large public debt on its high speed rail program in the 1980s and 1990s, the French government recently took steps to privatize construction and operations on its Tours–Bordeaux line. Similarly, in the U.S., the State of California is trying to attract private participation on its planned high speed line between San Francisco and Los Angeles. Based on French high speed rail history, this paper argues that, to succeed, California must commit both a high level of public borrowing as well as

On October 1, 1964, the world's first dedicated high speed passenger train service, called the Shinkansen, began operating between Tokyo and Kyoto. The line immediately attracted a large ridership and, by the end of its third year of operations, was earning net profits over and above both its operating costs and the debt incurred for infrastructure construction and purchase of rolling stock (Gourvish, 2009: 9). This was a highly significant achievement since, starting in the 1920s, most privately operated intercity passenger rail services had become unprofitable due to competition from highway-based transportation, causing governments throughout the world, including Japan's, to nationalize passenger services. High speed rail created the possibility that these services could return to profitability, become a significant part of the national transportation systems, and perhaps even attract the private sector to return once again to operating passenger trains. The commonly accepted definition of “very high speed” trains are those that run at average speeds greater than 150 miles per hour and operate on dedicated, grade separated track. In more than four decades after Japan achieved high speed commercial operations, public railway companies have developed high speed lines in many Asian countries, much of western Europe and Great Britain. In the United States, a joint public–private venture between the federal government and the Pennsylvania Railroad developed Metroliners, trains with the potential for very high speed, in the mid-1960s. In order to understand how these countries financed their high speed networks and how and why privatization of passenger rail is now a relevant policy option, three questions must be answered: first, how and why did passenger rail services shift from private to public ownership and operation in the mid-20th century? Second, how did that change affect the development of high speed rail? Third, does high speed rail create opportunities for a return of the private sector to passenger rail transport? To answer these questions, we compare France and the United States, since that comparison reveals much about how the public and private sectors related to each other in financing railway development. Throughout most of the 19th century and early 20th centuries, privately owned passenger railways operated profitably in both countries. But, their situation changed in the 1920s and 1930s due to financial problems caused by competition from highway-based transport which were severely exacerbated during the Great Depression. France then diverged from the U.S. by nationalizing its passenger railways and by using government financing and regulation to strengthen their competitive position. This established favorable conditions for the future development of French high speed trains. Though faced with the same Depression-induced financial crisis, the U.S. chose not to nationalize its railways. Instead, private companies were allowed to continue to operate passenger services, competing in the free market with other modes of transport. Ultimately their efforts failed and they were nationalized in 1971. Public takeover rescued American passenger railways, but left them severely weakened. This is one of the major reasons why the U.S. lagged so far behind France in developing high speed trains. The French–U.S. comparison also elucidates many of the key issues involved with public and private financing of high speed rail, such as privatization. High speed rail lines are very expensive to build. After the French government committed to developing high speed trains in the 1970s, decades of capital investment resulted in the accrual of a large amount of railway debt. As a result, the French state took steps to draw the private sector into helping to construct and operate new lines in order to mitigate the large and increasing deficits that accompanied the first 30 years of high speed rail construction. Recent plans for a high speed line between Tours and Bordeaux involve a public–private partnership never previously attempted on French railways. At the same time, in the U.S., the State of California recently committed significant funding to constructing a high speed line between San Francisco and Los Angeles — the first high speed rail line to get this close to actual construction in the U.S. For financing, California is relying largely on public debt and has only preliminary plans for attracting private participation. Comparisons to the French high speed rail history suggest that California's approach may be viable only if the state is willing, as was France for the first 30 years of its high speed rail construction program, to assume most of the construction debt burden in both the short and long term. Thus, French rail history is directly useful in foreseeing consequences of different approaches to financing high speed trains. In sum, cross national comparisons reveal that California will require both a high level of public borrowing as well as public guarantees on private borrowing if it is going to attract the private sector into either construction and/or operation of high speed railways. Even after the shift from privately owned and operated passenger railways to public systems in both France and the U.S., history suggests that public funding is the sine qua non of financing passenger railroads, including high speed trains.