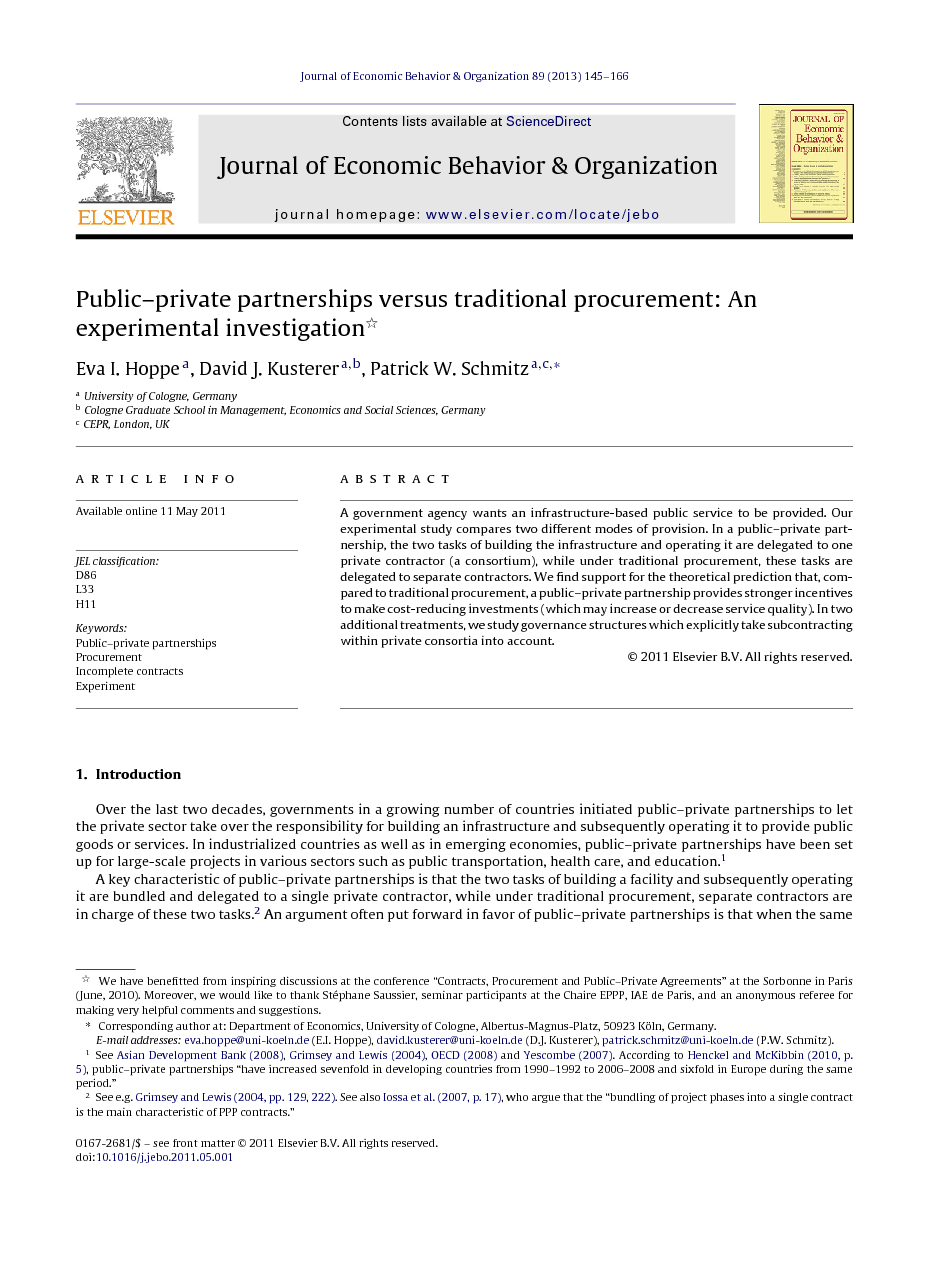 A government agency wants an infrastructure-based public service to be provided. Our experimental study compares two different modes of provision. In a public–private partnership, the two tasks of building the infrastructure and operating it are delegated to one private contractor (a consortium), while under traditional procurement, these tasks are delegated to separate contractors. We find support for the theoretical prediction that, compared to traditional procurement, a public–private partnership provides stronger incentives to make cost-reducing investments (which may increase or decrease service quality). In two additional treatments, we study governance structures which explicitly take subcontracting within private consortia into account.

Our two main treatments provide strong evidence for the fundamental trade-off identified by Hart (2003). A public–private partnership induces very strong incentives to invest in cost reductions, which is desirable if the investments are also quality-enhancing, but may well be undesirable if the investments have a negative side-effect on quality. In contrast, under traditional procurement incentives to invest are weak, both with regard to desirable as well as undesirable investments. In the experiment, we considered a parameter constellation where inducing the desirable investment was relatively more important, such that a public–private partnership would be preferable according to the theoretical analysis. Indeed, in the experiment both kinds of investments were made much more often in the PPP treatment (in line with Prediction 1) and the principal was better off under this governance structure (in line with Prediction 2). While in the last round, almost all investment decisions were as theoretically predicted, the only noticeable deviation from the theoretical analysis was the fact that in the TP treatment, in a relevant number of cases the payments from the principals to the selected builders were relatively large, which was reciprocated by choosing high levels of the desirable investment i.33 In addition, we have considered two subcontracting treatments. The investment behavior and the principals’ payoffs again differed between these two treatments as suggested by the theoretical analysis (supporting Prediction 3 and Prediction 4). According to the theoretical analysis, moreover there should be no differences between the PPP treatment and the Sub I treatment (where the builder is the main contractor), and similarly, there should be no differences between the TP treatment and the Sub II treatment (where the operator is the main contractor). Fig. 16 illustrates the average total surplus levels achieved in all four treatments. Note that in the final period, as predicted, neither PPP and Sub I nor TP and Sub II differ much from each other. In the somewhat more complex Sub I treatment, in the early rounds the average surplus is smaller than in the PPP treatment. Yet, in practice there might be no real choice between PPP and Sub I, since modelling the consortium as a single decision maker might best be seen as an analytical shortcut. Hence, Sub I may be considered to be the relevant alternative if (as in the parameter constellation that we have chosen in our experiment) a high level of the quality-reducing investment e is less harmful than underinvestment in i. Our experiment hence illustrates that frictions within the consortium might make a public–private partnership slightly less attractive than it appears when modelled as a monolithic entity. This result might encourage further theoretical studies of public–private partnerships to open the black box of contracting arrangements within the private consortia. Moreover, if it is more important to avoid overinvestment in e, our experiment leads to another important insight. If the parties involved are interested in establishing reputations by acting in reciprocal ways, then traditional procurement might be superior compared to a public–private arrangement with the operator as main contractor. The reason is that if the investing party reciprocates generous payments, then it tends to do so by taking the investment decisions that are best for the main contractor in the Sub II treatment, while it takes the first-best decisions in the TP treatment. This finding suggests that paying more attention to reputation and reciprocal behavior might be an interesting avenue for future theoretical research on the organization of public procurement.