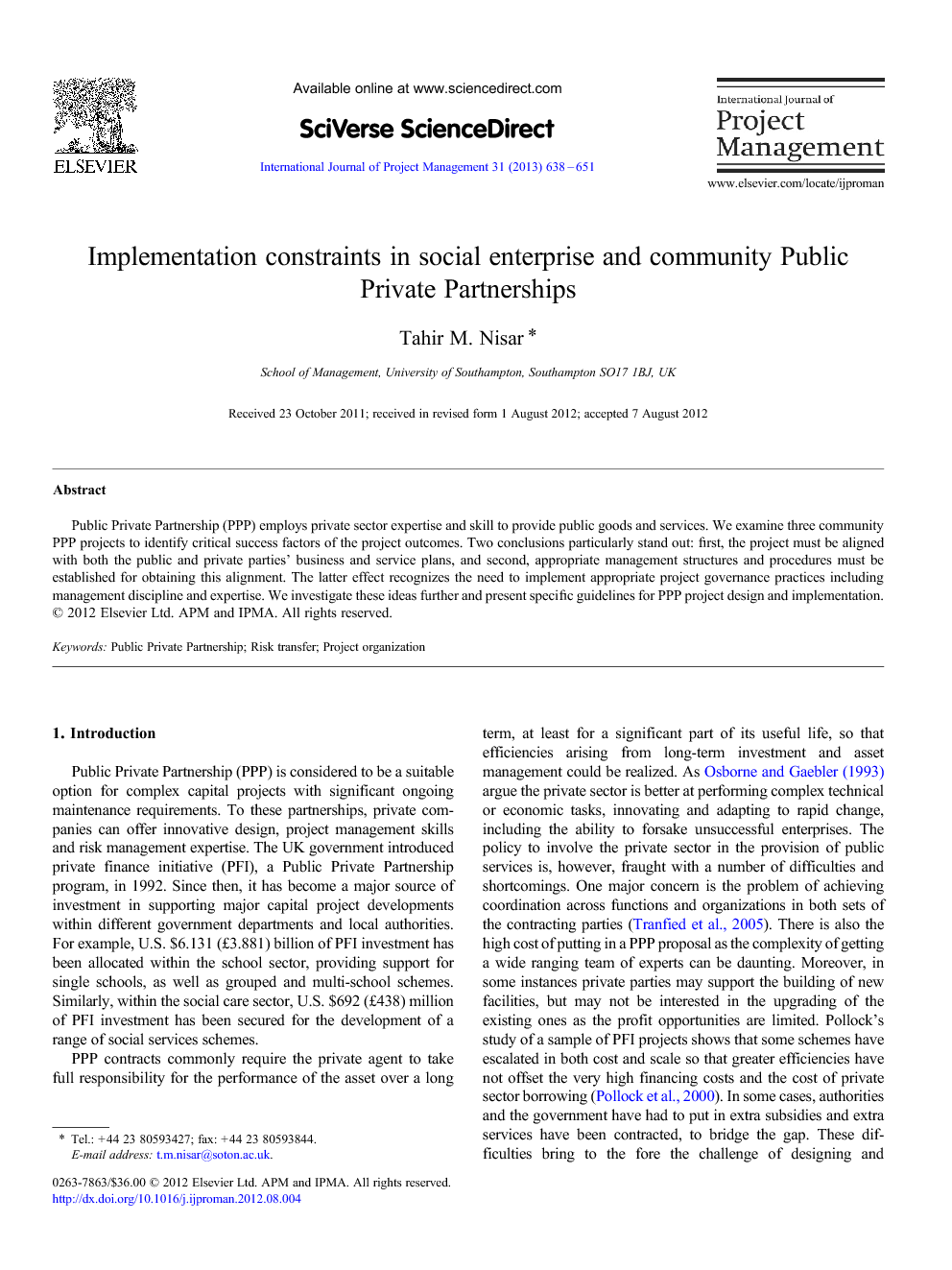 Public Private Partnership (PPP) employs private sector expertise and skill to provide public goods and services. We examine three community PPP projects to identify critical success factors of the project outcomes. Two conclusions particularly stand out: first, the project must be aligned with both the public and private parties' business and service plans, and second, appropriate management structures and procedures must be established for obtaining this alignment. The latter effect recognizes the need to implement appropriate project governance practices including management discipline and expertise. We investigate these ideas further and present specific guidelines for PPP project design and implementation.

Public Private Partnership (PPP) is considered to be a suitable option for complex capital projects with significant ongoing maintenance requirements. To these partnerships, private companies can offer innovative design, project management skills and risk management expertise. The UK government introduced private finance initiative (PFI), a Public Private Partnership program, in 1992. Since then, it has become a major source of investment in supporting major capital project developments within different government departments and local authorities. For example, U.S. $6.131 (£3.881) billion of PFI investment has been allocated within the school sector, providing support for single schools, as well as grouped and multi-school schemes. Similarly, within the social care sector, U.S. $692 (£438) million of PFI investment has been secured for the development of a range of social services schemes. PPP contracts commonly require the private agent to take full responsibility for the performance of the asset over a long term, at least for a significant part of its useful life, so that efficiencies arising from long-term investment and asset management could be realized. As Osborne and Gaebler (1993) argue the private sector is better at performing complex technical or economic tasks, innovating and adapting to rapid change, including the ability to forsake unsuccessful enterprises. The policy to involve the private sector in the provision of public services is, however, fraught with a number of difficulties and shortcomings. One major concern is the problem of achieving coordination across functions and organizations in both sets of the contracting parties (Tranfied et al., 2005). There is also the high cost of putting in a PPP proposal as the complexity of getting a wide ranging team of experts can be daunting. Moreover, in some instances private parties may support the building of new facilities, but may not be interested in the upgrading of the existing ones as the profit opportunities are limited. Pollock's study of a sample of PFI projects shows that some schemes have escalated in both cost and scale so that greater efficiencies have not offset the very high financing costs and the cost of private sector borrowing (Pollock et al., 2000). In some cases, authorities and the government have had to put in extra subsidies and extra services have been contracted, to bridge the gap. These difficulties bring to the fore the challenge of designing and implementing partnership plans that manages public services more effectively and innovatively. After a brief period of lull, the UK Government has now again made a strong commitment to PPP-designed social and infrastructure projects (HoC PAC, 2011 and NAO, 2011). Prior studies have discussed the merits of Public Private Partnerships (Froud and Shaoul, 2001, Pollock et al., 2000 and Shaoul, 2005), we in this study employ a novel theoretical and empirical approach to examine the implementation challenges of PPP. Specifically, we focus on the critical success factors of PPP project outcomes that likely influence the effectiveness of such arrangements (Rockart, 1982). In this respect, our contribution revolves around examining those practices that are required for the successful conclusion of PPP initiatives, and establishing parameters to assist public sector project sponsors in determining the most appropriate project management framework. The paper thus highlights key partnership management issues that need to be addressed in the authorities' quest to obtain better value for money (VFM). In this respect, the paper goes beyond the concerns of prior research on PPP that mostly investigates the progress made in involving private agents in the provision of public services (Dickinson and Glasby, 2010 and Hall, 1998). For example, the design of PPP contracts may involve a number of key decisions in areas such as risk transfer, the provision of incentives for a ‘whole-life’ approach, affordability and project expertise. A careful consideration of these critical success factors is likely to enhance the possibility of PPP solution becoming a viable alternative to traditional methods of service provision. We therefore not only stress the important role that the new partnership arrangements can play in the provision of public services, but also offer evidence concerning the importance of success factors in the implementation of PPP projects. Following Hart (2003) and Besley and Maitreesh (2001), we employ transaction cost approach to theoretically justify the involvement of the private sector. As part of this theoretical exercise, we then develop a set of critical success factors that discusses how public authorities can enhance the participation of private agents and reduce transaction costs. In this respect, we specifically draw on Smyth and Edkins' (2007) relationship management approach and Kwak et al.'s (2009) coordination management approach to PPP that emphasise non-hierarchical coordination. Our theoretical framework thus combines two disparate streams of literature (i.e. buyer–supplier and relationship management literatures) to explain the practice of PPP. Subsequently, using a multi-case field research approach, we investigate the application of this approach and draws conclusions for the effective design and implementation of PPP projects. The paper proceeds as follows. We first briefly survey the literature on Public Private Partnerships and outline the various components of our theoretical framework. In the next section, we discuss our field research strategy and present three PPP project case studies. The final section summarizes our conclusions and indicates areas for future work.

As our findings show, PPP projects must pay close attention to critical success factors as envisaged within the framework of transaction costs. These may be associated with incentives that provide for a ‘whole-life’ approach to PPP project management and less-hierarchical partnership approaches that deliver good value for money in public procurement of goods and services. Paying attention to these factors not only reduces the cost of transacting but also improves communication and coordination. We also find that risk transfer in PPP contracts encourages private partners to manage project risks effectively. But delays and interruptions have been encountered when there were insufficient or inexperienced project management resources. We have therefore identified three areas for improvement, including strategic alignment, partnership approaches and project management skills. Our investigation is likely to provide a better understanding of private sector involvement in generating innovative solutions to public service provision. We have not discussed in detail the processes involved in implementing unitary charge systems — a specific performance measurement system. Future research can examine these issues more critically so as to make performance measurement in PPP projects more effective. Research into this and other related areas of project governance and management will likely shed light on more appropriate systems of monitoring and control in PPP projects.