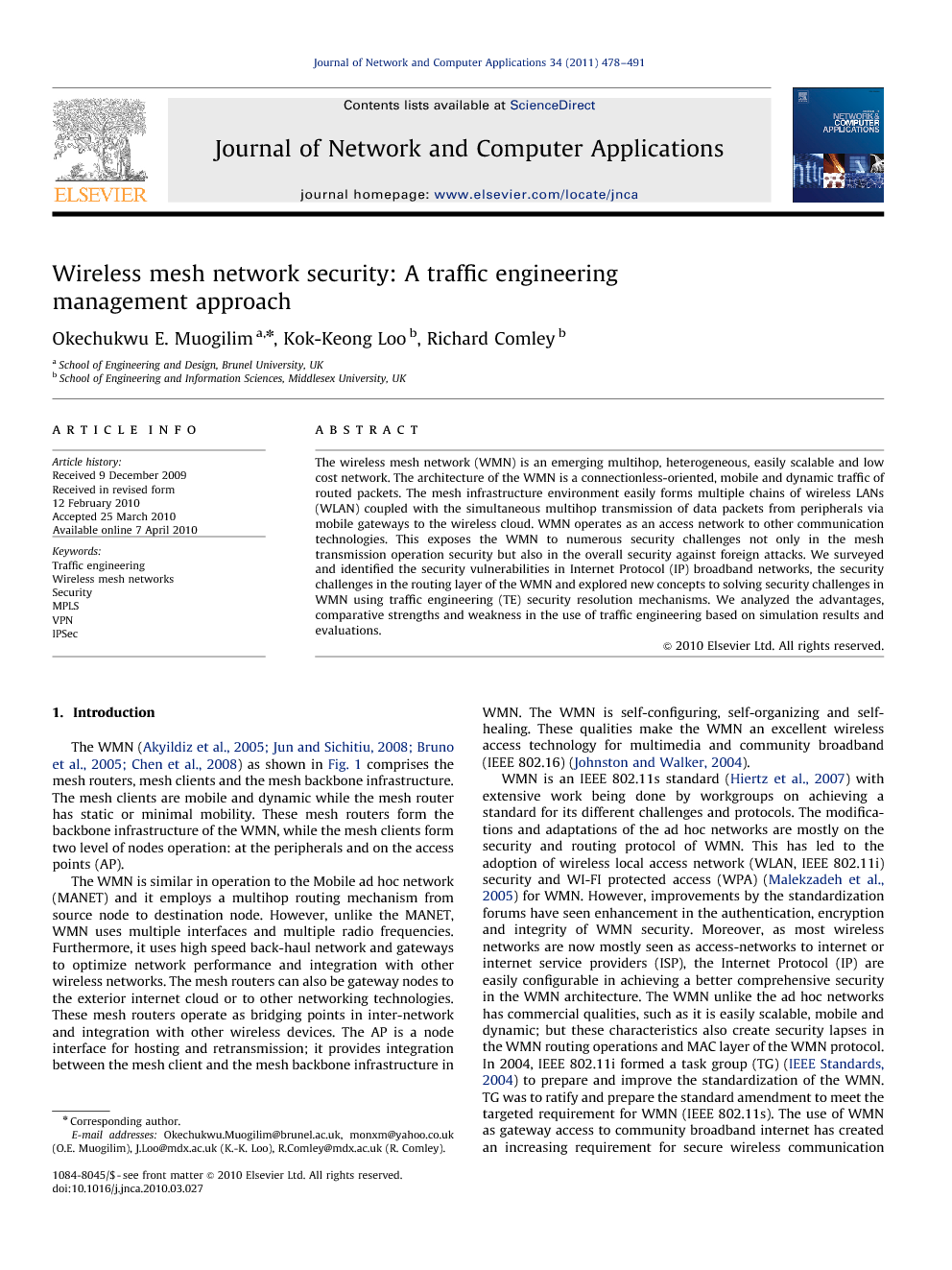 The wireless mesh network (WMN) is an emerging multihop, heterogeneous, easily scalable and low cost network. The architecture of the WMN is a connectionless-oriented, mobile and dynamic traffic of routed packets. The mesh infrastructure environment easily forms multiple chains of wireless LANs (WLAN) coupled with the simultaneous multihop transmission of data packets from peripherals via mobile gateways to the wireless cloud. WMN operates as an access network to other communication technologies. This exposes the WMN to numerous security challenges not only in the mesh transmission operation security but also in the overall security against foreign attacks. We surveyed and identified the security vulnerabilities in Internet Protocol (IP) broadband networks, the security challenges in the routing layer of the WMN and explored new concepts to solving security challenges in WMN using traffic engineering (TE) security resolution mechanisms. We analyzed the advantages, comparative strengths and weakness in the use of traffic engineering based on simulation results and evaluations.

In the paper we explored the security threats in WMN over a broadband network. Determination and investigation of the security solution using traffic engineering mechanism were explored. We tested the influence of security mechanisms over increased traffic loads and hop-count. For multi-layer comparative analysis with the traditional 802.11i we conducted a test for the observation of the influence of node mobility in a multihop scenario. Further evaluation was done on the network load influence, end-to-end traffic delays and delivery ratio in attack simulated scenarios. Observations of the technical advantages using a derived and adapted technique in traffic engineering were carried out. The proposed VPN-IPsec solution applied to the WMN security challenges and weakness showed enhanced overall performance. Severe security threats such as DDoS also showed comparatively more effective security resolution in WMN. The proposed management model security technique demonstrated that a distributed security failure caused by traffic flooding, greyhole and blackhole DDoS in WMN security can be prevented and resolved using VPN-IPsec. The security model showed efficient performance in intrusion detection and prevention mechanism too. Analysis of our investigation showed high performance in the different metrics used. In our analysis, we noticed that it will be very hard to provide an effective security for multi-hopped wireless mesh network because of its inherent architectural weakness. However, we propose a mutual combination and use of cooperative IP communication security mechanisms in the prevention and defense of security threats and attacks in the WMN as shown by the IPsec and MPLS-VPN technique. The VPN-IPsec through authentication, encryption, cryptography and tunneling and IP security configuration and operational mechanisms of the MPLS-TE lowers the overhead and processing of the WMN. The improved VPN-IPsec integrates most the security measures needed to comprehensively secure both the data traffic and the infrastructure wireless mesh network.