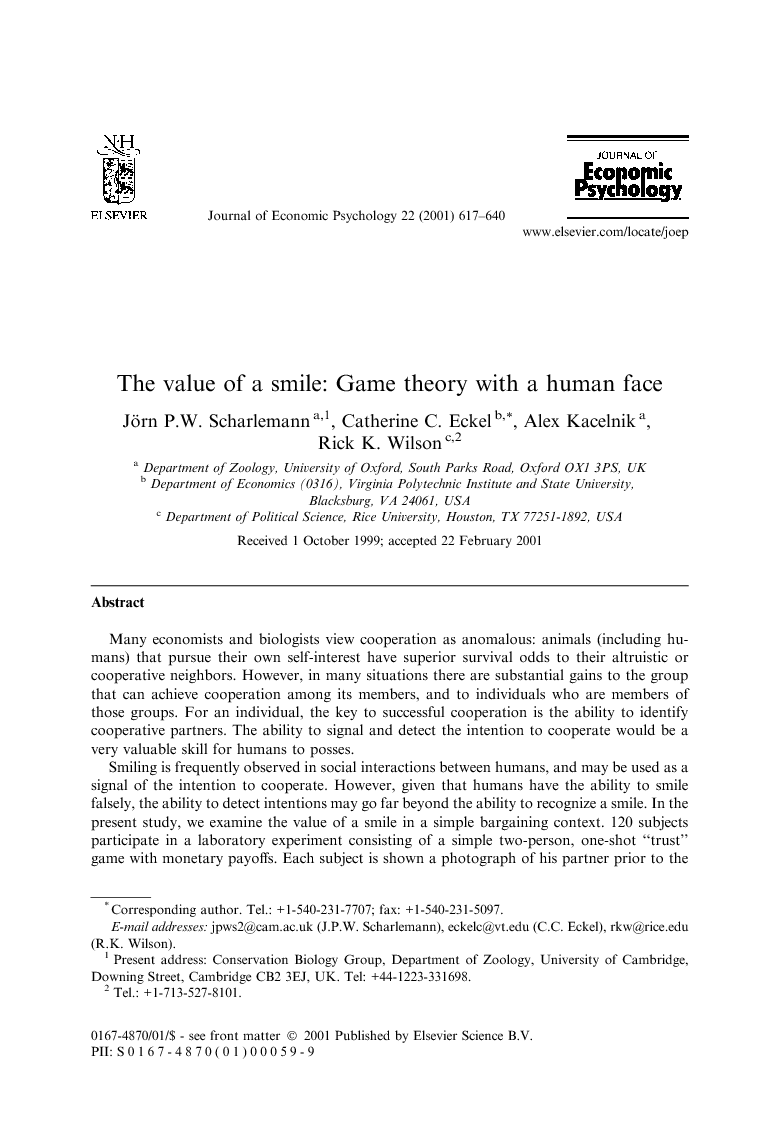 Many economists and biologists view cooperation as anomalous: animals (including humans) that pursue their own self-interest have superior survival odds to their altruistic or cooperative neighbors. However, in many situations there are substantial gains to the group that can achieve cooperation among its members, and to individuals who are members of those groups. For an individual, the key to successful cooperation is the ability to identify cooperative partners. The ability to signal and detect the intention to cooperate would be a very valuable skill for humans to posses. Smiling is frequently observed in social interactions between humans, and may be used as a signal of the intention to cooperate. However, given that humans have the ability to smile falsely, the ability to detect intentions may go far beyond the ability to recognize a smile. In the present study, we examine the value of a smile in a simple bargaining context. 120 subjects participate in a laboratory experiment consisting of a simple two-person, one-shot “trust” game with monetary payoffs. Each subject is shown a photograph of his partner prior to the game; the photograph is taken from a collection that includes one smiling and one non-smiling image for each of 60 individuals. These photographs are also rated by a separate set of subjects who complete a semantic differential survey on affective and behavioral interpretations of the images. Results lend some support to the prediction that smiles can elicit cooperation among strangers in a one-shot interaction. Other characteristics of faces also appear to elicit cooperation. Factor analysis of the survey data reveals an important factor, termed “cooperation”, which is strongly related to trusting behavior in the game. This factor is correlated with smiling, but is somewhat more strongly predictive of behavior than a smile alone. In addition, males are found to be more cooperative, especially towards female images, whereas females are least cooperative towards female images.

Imagine two persons facing one another for the first time in a social exchange, where there are potential gains to both parties. They know nothing about one another, but each has to make a decision and those decisions will jointly affect their payoffs. How does each anticipate the other's actions? How does one judge whether a partner is trustworthy or predict if trust will be reciprocated? Strategic behavior involves actors choosing strategies contingent on the anticipated actions of others. Actors forecast the choices of others based on a vector of characteristics, which can be either inherent or intentional. Clearly actors embody inherent characteristics, such as gender, ethnicity, or age, that signal a type. Individuals display additional signals through attire, language, and facial expressions. Both inherent and intentional signals provide information and influence strategic choice. Humans perform many actions, purposively taken with full knowledge of their consequences, which appear to be “irrational”; i.e., if they did not perform these actions, they would be better off, at least in the short term. In particular people often put themselves in a position where they must rely on another person to reciprocate a potentially costly trusting move. Examples include ordering software over the internet, leaving an automobile with a valet service, or buying a bottle of fine wine at a new wine shop. In each case we turn over something of value (a credit card number, a car or money) expecting to receive something in return, but at the same time risk exposing ourselves to possible exploitation by “cheaters”. The Internet firm may credit our account and never send the software. The valet may abscond with the car. The wine may be ruined, having been improperly stored. But people routinely trust others and successfully avoid cheaters. How? This paper focuses on a cue that may affect the beliefs held by actors playing a simple game, and affect their willingness to risk an initial trusting move. We argue that the facial expression of a counterpart contains information that is used by an actor in formulating beliefs and subsequent actions. This research presents findings from experiments designed to test the effect of facial expressions on trusting behavior. We examine the effect of a smile on strategy choice in a simple bargaining game, while controlling for sex-pairings. Two questions are addressed: (1) Does smiling elicit trust among strangers? (2) Is there a difference between the sexes in assessing trust? This is the first of a planned series of studies examining the social signaling of cooperation through facial expressions. Our purpose in this initial study is to discover any existing regularity in the relationship between the decision to trust and the facial characteristics of a partner. We isolate the effect of the facial expression of a partner on the decision to trust in a two-person, sequential game; facial expressions are predetermined, and constitute the controlled stimulus in our experiments. We do not examine actual attempts to signal cooperation – whether genuine or deceptive – on the part of partners to a potential exchange, and so do not test for subjects' ability to accurately signal or detect intentions. Plans for future research that will examine these issues are discussed in the final section.